When Narendra Modi recently claimed he had participated in Bangladesh’s freedom struggle and was arrested for it, did he know about Bengal’s soft spot for men with tall tales? 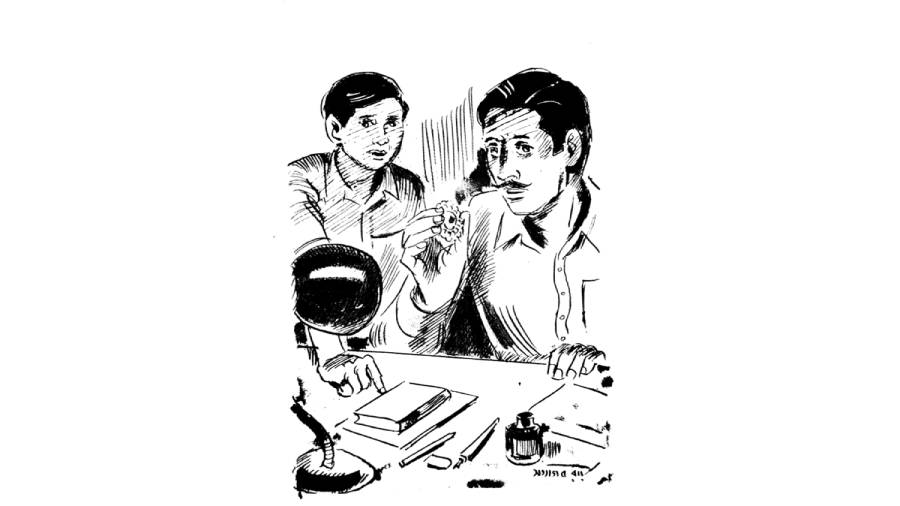 Gool is a fine thing. A little more than a lie, a little less than a fantasy, rooted in general knowledge, embellished by scholarship, and buoyed by great imagination. The deliverer of gool is at once master of swing and spin, possessed of a great sense of audience and timing.

Gools work best to the accompaniment of cha and ta — fritters, cigarettes — and for this reason you are more likely to find a goolbaaj in or around a tea stall. He would be holding forth on corporation scandals or Biden’s future strategies, depending on his repertoire. Those in attendance at the durbar are not missing a questioning mind, but yes, they are willing to abrogate reason temporarily for the sake of tea and live entertainment, tax exempt.

And while goolbaajes exist in Bengal a dime a dozen, the ones who continue to inspire the masses are the Ghanadas, Tenidas and Tarinikhuros, all gifts of Bengali literature. And while none of them is a chaiwala, it is a fact that all of them come from humble backgrounds. No one knows what Ghanada does for a living, Tenida is the neighbourhood no-good who has failed the matriculation exam seven times and Tarinikhuro, despite his boast of holding 56 different jobs across 33 Indian cities, lives in a rented place in central Calcutta and bums lal cha and snacks off his audience whenever he can. 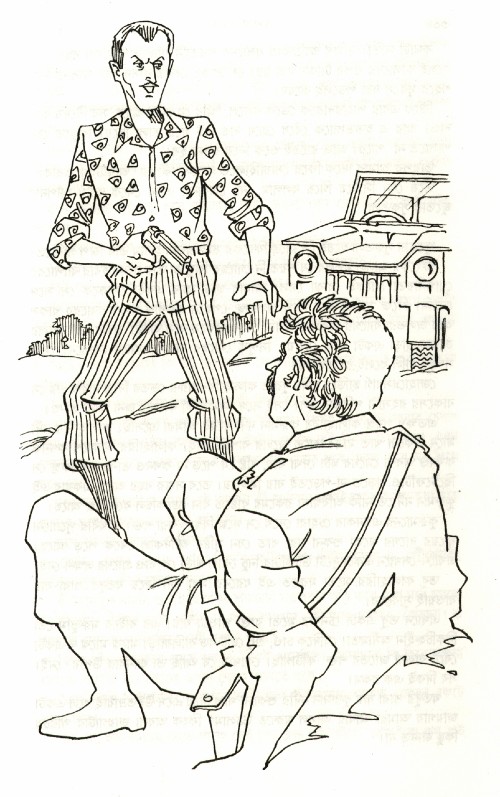 Ghanada
Sourced by The Telegraph

My favourite is Ghanada, aka Ganashyam Das, created by Premendra Mitra. Ghanada, his messbari, or boarding house, in central Calcutta, and his young fans — Shibu, Sisir, Gour, Sudhir — made their first appearance in the annual number of an obscure magazine in 1945. Sudhir, who’s the narrator of all Ghanada stories, tells the reader in the debut story, Mosha (The Mosquito), “We’ve accepted that there’s no place on Earth he hasn’t been to in the last 200 years and no event that he hasn’t had something to do with.”

Ghanada’s yarns are a combination of science fiction, travelogue and adventure and, of course, he is the hero of every episode. In Mosha, for instance, he bumps into a rogue entomologist, Nishimara, who has been genetically engineering mosquitoes to turn them into agents of biological warfare in the remote Russian island of Sakhalin. Ghanada uses his jujutsu skills to overpower the scientist, kills the first engineered mosquito and saves the world.

Mitra had said in an interview to the Span magazine in 1974, “Ghanada is a teller of tall tales, but the tales always have a scientific basis. I try to keep them as factually correct as possible.”

Following the outbreak of Covid-19 pandemic, Mosha does not sound all that tall a tale, but in Tupi (Cap), Ghanada is dragged across Mount Everest by a runaway yeti who wants to help him conquer the peak before Edmund Hillary and Tenzing Norgay can. The detailed roadmaps and description of the Himalayan terrain make the story rather believable. Amlan Dasgupta, who has translated these tales into English, wrote, “Ghanada’s bold and risky geographical forays are essential to the success of the stories, especially in the way in which the intimacy and familiarity of the boarding house setting are contrasted with the exotic and unfamiliar landscape.”

The tradition of raconteurs with a talent for hyperbole and invention in Bengali culture is several centuries old. Chandi mandaps — meant for the worship of Durga or Chandi — across rural Bengal, were places for informal gatherings and conversation. Much later, in 19th century Calcutta, wealthy babus hosted adda sessions in their baithakkhanas, or drawing rooms. The raconteur, irrespective of social standing, was the lynchpin of these addas.

Domorudhor
Sourced by the correspondent

One of the earliest raconteurs of Bengali literature was Domorudhor, a creation of satirist Troilokyonoth Mukhopadhyay in the early 20th century. The book Domoru-Charit chronicles Domorudhor’s flights of fancy. In one story Domorudhor rides a peacock, which moves faster than an express train, zipping across the solar system. In another story, he is swallowed by a tiger but continues to write letters to his employees from the beast’s belly. In yet another tale, he invokes a genie who arranges for him to get married to Scheherazade. 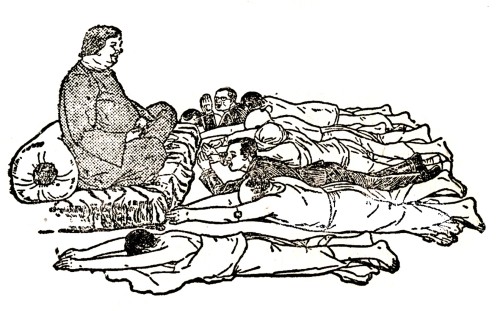 Birinchi Baba
Sourced by The Telegraph

Rajsekhar Basu, who we know by the nom de plume of Parashuram, thought up Birinchi Baba, a fake godman. “A high-class actor who understands psychology, has read a little bit of history, and has a fertile imagination and guts” is how another character in the same story, the rationalist Satya describes Birinchi Baba. Later, Satyajit Ray immortalised this character in the film Mahapurush. Birinchi Baba’s stories are tales of the improbable — he talks about his interactions with the Buddha, Plato, Manu; how he inspired Einstein to work on the theory of relativity; how he and Jesus would argue ad nauseum about matters of theology; how Noah consulted him when he built his ark and so on and so forth. But at another level, their acceptability is a commentary on society at large, then and now. Birinchi Baba doesn’t claim there is gold in cow’s milk, but he is willing to share a solution with a bhakt who wants to travel back in time and buy some loha or iron at an affordable price.

Narayan Gangopdhyay’s Tenida is a more benign raconteur. About six feet tall, lean, with a large nose and a 42-inch chest (not quite 56, mind you), he is also brash, loud-mouthed, with a large heart and an even larger appetite.

Tenida
Sourced by The Telegraph

Like Ghanada, Tenida too has his yeti story. He describes his encounter with a yeti in Kalimpong, a creature “as tall as the ceiling of a hall, with brown hide and burning eyes, fluent in Bengali and teeth as big as daggers”. He narrates his experience at the Burmese war front during World War II, wherein he adopted the disguise of a dog to escape Japanese gallows and later chased away enemy soldiers. For this swashbuckling feat, Tenida claims he was decorated with his third Victorian cross by the Queen.

Ray’s Tarinikhuro (khuro is Bengali for uncle) is much older than Tenida and Ghanada. The 60-something Tarini Charan Bandyopadhyay has been in his lifetime a prince’s body double, a magician’s manager, a king’s secretary and even a journalist. A majority of his stories have to do with the supernatural — skeletons wielding guns, phantom pankhapullers and duels between sahibs over a beautiful memsahib.

Gourkishore Ghosh’s Brojoda or Brojoraj Karfarma, is not quite in the big league of raconteurs. He likes to brag about the time he advised Tagore to push for a Nobel Prize nomination, how he was instrumental in helping Chittaranjan Das become the mayor of Calcutta and Jawaharlal Nehru, India’s first prime minister. Apparently, it was he who introduced Satyendranath Bose to Einstein, and it was again he who exposed Mata Hari to the British military. Brojoda’s greatest regret is that “Bengalis have become mentally weak because they have lost their imagination and the ability to digest off-beat stories”. And, oh yes, he is a lower division clerk in a British firm.

And all these dadas would have remained prisoners of the books they inhabit, if many summers ago I had not met Kalada. There he was in a tea shop in Ariadaha bajar, 70-plus, frail but full of stories about how he had played football in the Calcutta League in his youth, how he had rubbed shoulders with P.K. Banerjee and Chuni Goswami, how his superb tackle in some unspecified match had drawn praise from the top stars of Tollywood and the would-be chief minister, Buddhadeb Bhattacharya. All that Kalada ever wanted in exchange for his stories was a king-size cigarette and perhaps a cup of tea with biscuits.

Gool can be a most enjoyable thing, depending on the price you pay for it.