Picture-perfect Zermatt lies in the shadow of The Matterhorn, Switzerland’s most famous peak, says Supriya Newar 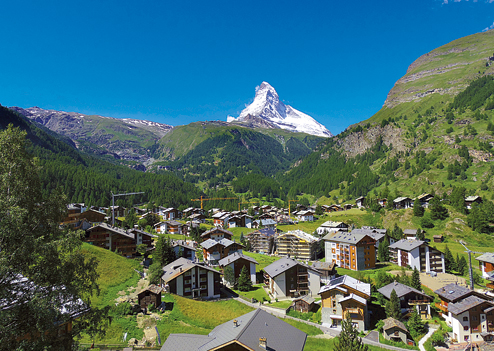 It’s one of the world’s most famous railway rides — the Glacier Express. We clambered aboard our first-class panoramic coach in the Swiss town of Chur at 11.24am sharp, passed through tunnels, untouched mountain landscapes, rolling meadows and green farm lands and finally stopped at Zermatt, home of the ultimate Swiss icon — The Matterhorn. The railway platform at Zermatt, our destination for the next two days, welcomed us in all major languages — including Hindi. In fact, we alighted next to a big red sign saying Swagat.

Zermatt owes its popularity to the beautiful but dangerous Matterhorn, one of the Swiss Alps’ most famous peaks that looms over the village and has attracted mountaineers from around the world for 150 years — ever since artist-engraver Edward Whymper scaled it in 1865. He made it down successfully but his four climbing companions plunged to their deaths on the descent.

As we came out of Zermatt’s railway station, we realised what we’d read was true. This village that’s part of the Valais Canton has a rich tradition of wine-making and also boasts of being totally eco-friendly and has no motor
vehicles plying on its roads.

What it does offer instead are colourful electric vans that whiz around town along with horse-driven carriages — making the visitor feel they’re in an Alpine “Noddy book” town. Our hotel, Walliserof, was right on the main road, Bahnhofstrasse, which is a treat, lined with restaurants, bars, cafés and shops stocking every possible Swiss souvenir, upscale boutiques and luxury Swiss watch stores. These enterprises stand cheek-by-jowl with heavy skiing and mountaineering outlets. Bahnhofstrasse can be traversed end-to-end by foot in less than an hour — provided you don’t linger too long in the stores!

There are also charming rustic wooden chalets, burnt black by the sun. Many have been converted into hotels to cater to adventure-seekers who converge on Zermatt in summer for climbing expeditions and in winter for skiing. There’s the railway and coach stations at one end and at the other end lie The Matterhorn Museum and The Zermatt Church. Both worth a visit.

Just a stone’s throw away from the Church is the Zermatt Cemetery dedicated to the hundreds of mountaineers who’ve perished on The Matterhorn and other peaks. Rows of tombstones contain heartfelt tributes engraved on them. Ironically, just at this point, we also caught a really good view of The Matterhorn towering in the afternoon sun.

The visit to the cemetery was a bit sobering so I decided to perk myself up by stopping for a delectable bite at a pizzeria, and after that the roadside benches began to beckon. I found an empty one and perched myself to watch the world go by.

Skateboarders and cyclists zipped past while tourists, locals and the occasional charming horse-drawn carriage
ambled by. Just as the church bells tolled, a herd of lively black-neck goats, also called the Glacier goats, marched up, their bells tinkling in unison with the church bells, echoing throughout Bahnhofstrasse. The nip in the air coupled with a blue sky and golden Matterhorn had a hypnotic effect and right there found myself dozing off.

Later that evening, we hired a horse-carriage whose dapper driver, Imboden, charmed us and introduced us to his handsome steeds Mr Lester and Mr Charlie. With a whistle from their master, the horses began trotting and Imboden started chatting. He explained many decades ago, the mountain guides who helped tourists, became rich over time and built many of the town’s hotels of which the oldest was the Monte Rosa, named after another popular peak.

As the carriage negotiated bylanes, we learnt the iconic dagger-like Matterhorn was the third most-clicked mountain in the world. And no visit to Zermatt is complete without a ride up to Gornergrat, on The Matterhorn Railway. Starting at Zermatt, this rail trip takes you up to The Gornergrat Summit, passing through lush fields and farms, tunnels and ravines, effortlessly ascending nearly 5,000ft in 50 minutes.

Once you reach Gornergrat, you realise why it’s worth waking at 5am for the ride.

You’re treated to a 360-degree pano-ramic Alpine view from Monte Rosa and the Gorner glacier to The Matterhorn in its glory. The summit also boasts Europe’s highest-altitude hotel: The Kulmhotel Gornergrat has an open-air terrace to soak in the fantastic views and bask in the warm sun under a cloudless blue sky over a coffee or glass of wine.

To rush it here would be a shame and no wonder you find tourists from every corner of the world clicking pictures, talking to guides, discussing their hikes or simply sun-bathing. This is also a great spot to get a souvenir photograph with one of the famed St Bernard rescue dogs with The Matterhorn as a backdrop! Gornergrat is also now showcasing The Matterhorn Story, an open-air theatrical production about the great climb to commemorate 150 years since the first expedition. As we finally make our way downtown, we bid goodbye to what has to be Switzerland’s most abiding images.