Cheery on the cake

Multiple influences make up the Calcutta Christmas cake. The Telegraph works the slices 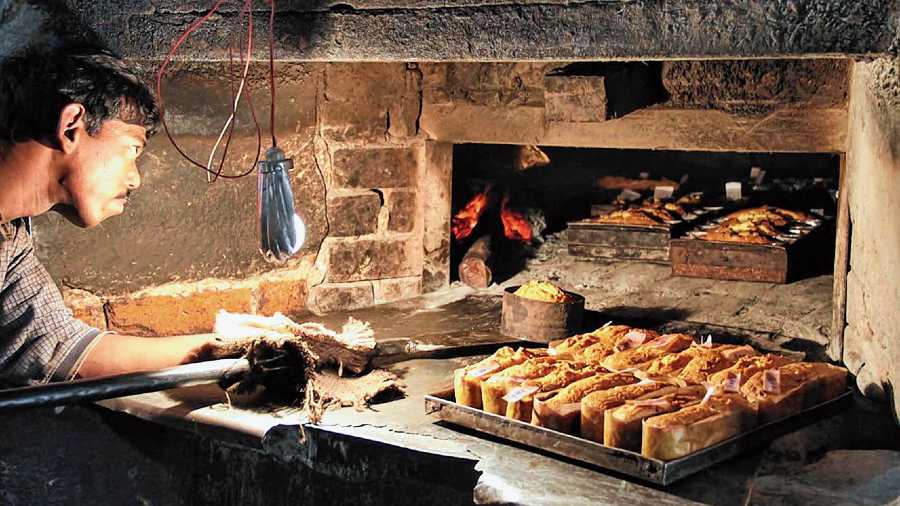 The advent of Christmas in Calcutta is signalled by shop window decorations — as in most other places across the world — the sunlight losing its ability to scorch and mounds of cake at the grocer’s, the baker’s and the footpath stalls. These Christmas cakes — some tinned, some boxed, some in foil shells, some wrapped in humble paper — come in a range of prices as well as names, rich fruit cake, butter fruit cake, English fruit cake, plum cake, Dundee cake, even royal fruit cake. All of them have some combination of dry fruits — raisins, glace cherries, currants — and nuts. And even when Christmas is over, these cakes will adorn shops right into the new year.

A Dundee cake is a Scottish fruit cake decorated with almonds, while a plum cake is another name for a fruit cake.

Fruit cakes are heavy by nature, with a dense texture, dark and well-spiced; meaning the opposite of the light, airy, faintly-scented perfect cake. A fruit cake is much more forgiving of changes in measurement or overbeating, making them easier to bake.

But not if you go by the experience of homebaker Manjula Acharya. “Fruit cakes take a long time to bake. Also, baking them at a high temperature to hasten the cooking process leads to either an undercooked centre or a burnt top,” she says, explaining she hasn’t yet mastered the fruit cake though she can make a mean red velvet, a decadent chocolate and even an exotic cheesecake.

Perhaps all she needs is a perfect recipe. Debra Alexander of Saldanha Bakery in central Calcutta uses the recipe of her grandmother Ubeline Saldanha, who started this bakery with husband Ignatious in the 1930s, to bake thousands of loaves of rich fruit cake during this season. It is the tradition of many Calcutta families to pick up their Christmas goodies from this bakery that still functions from the original home of the Saldanhas. “Actually, you can order fruit cake from us any time of the year,” says Debra.

The other bakery whose fruit cake is a must for old-time Calcuttans is, of course, Nahoum’s.

While Calcuttans inherited their Christmas cake-eating habits from the British — probably — please note that the bakeries named above were started by a Goan and an Armenian, respectively. Purba Chatterjee, who is studying the intangible heritage the Portuguese left us, would like to lay the recipe of the fruit cake as we know it at the door of the Portuguese.

“The Portuguese were sailors and had a fondness for food that could be preserved for a long time. And fruit cakes are filling as well as long-lasting,” says Chatterjee.

Much like fine wine, the dark brown fruit cake tastes better the more it matures. It stays fresh for a long time because it contains dried fruit that has been soaked in alcohol and also because of the tradition of feeding them a couple of teaspoons of spirit regularly. The second point is, of course, true of homemade cakes but not of bakery made ones.

In A Taste of Time: A Food History of Calcutta, Mohona Kanjilal writes that city-based Christians prefer to bake their own cakes on Bara Din and each family has its own recipe. “Many kilograms of cake mix, according to an old family recipe, are handed over to the local rotiwala (bread man) three weeks before Christmas. Baked in half pound bread tins, cakes are exchanged between family and friends... The daily dousing of the cake with rum makes for a merry Christmas,” write Minakshie Das Gupta, Bunny Gupta and Jaya Chaliha in The Calcutta Cookbook: A Treasury of Recipes from Pavement to Palace.

The main reason for the dark hue of the fruit cake is the addition of brown or unrefined sugar. “Refined sugar came much later so the Portuguese introduced raw cane sugar in baking,” says Chatterjee. “Unlike the English, whose fruit cakes contained cherries and berries (dried cherries, currants, apricots, figs, raisins and citrus peel, if you consult old cookbooks), the Portuguese adapted their recipes to what was available locally. Hence the addition of candied white pumpkin (murabba) and Bengal currant (koromcha or karaunda),” she adds. Along with this, the local varieties of fruit cake have raisins, cashews, dates, slivered almonds and candied citrus peels (that give a slight bitter taste).

Whether the credit lies with the English or the Portuguese, we are happy to have the fruit cake in our lives. And if you think you cannot buy any more fruit cake since Christmas is over, fear not. The Armenian Church celebrates Christmas on January 6.