Many a winter’s tale 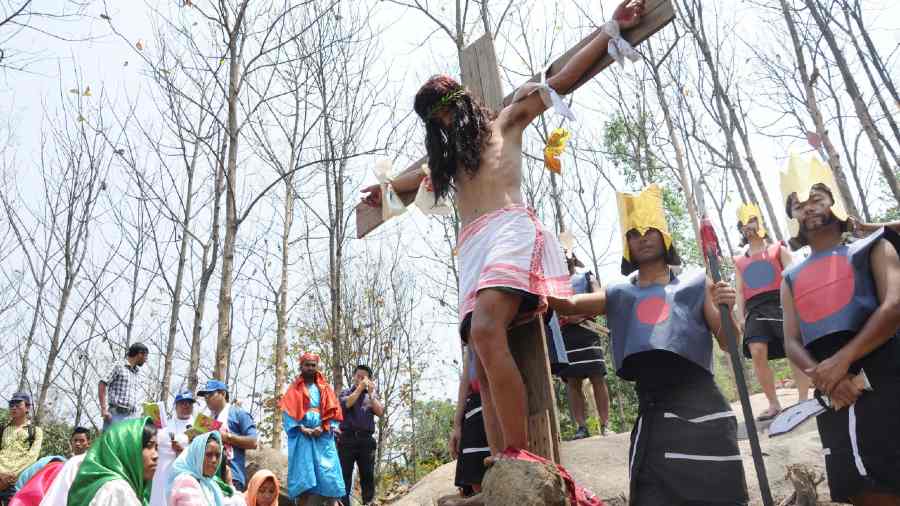 This is a piece about a book. This is also a piece about a book that is a window. The window goes by the name Bible Natya Sanchay. Suranjan Middey, the man who fashioned this window of a book, perhaps only meant it to open onto a certain view, but as sometimes happens, the creation takes on a greater life and meaning beyond the intended. It turns out this collection of Bible plays, sprung off Bengal and Bangladesh in the last century, can also be quite the kaleidoscope depending on the viewer.

Middey tells The Telegraph that growing up in suburban Bengal, he was well-acquainted with Bible plays. He says, “In the run-up to the new year, eight-day-long melas or carnivals were held. And in our time, alongside magic shows and musicals, the Bible play was a must.” (Mind you, he is talking way beyond the Nativity play or Christmas pageant commonly associated with Christmas celebrations among a certain section of Christians as well as non-Christians.)

These melas continue to be organised and, according to Middey’s estimation, there are about 50 of them in mofussil areas. “They are very much part of sheeter sharadiya,” he says. The coinage, a spin on the fond Bengali word meaning autumnal and connoting Durga Puja festivities, is interesting as it uses the festival and associated experience and emotions as the touchstone and keeps out the associated religiosity.

To the child’s mind, when Middey looks back now, the Bible plays did not seem like any overt exercise in religiosity, merely a recounting of familiar tales or tales about familiar figures from a familiar text.

It didn’t, however, occur to him to attempt a collection of these plays until much later.

The idea presented itself when he saw the production of Bharat Bandhu William Carey, a play about the 18th century Baptist missionary, at Calcutta’s Kala Mandir. “Mother Teresa herself had come to see the play,” says Middey. He spent the next 25 years looking for such works in church and missionary journals little-known outside the Bengali Christian community.

That is how he came to find a play from Bankura’s Sarenga, otherwise known as the address of Maoists. The playwright of Krusher Chhaya or Shadow of the Cross, Sudheendramohan Soren, was a music teacher in a college there. Middey also travelled to Dhaka, Chittagong and Khulna in pursuit of scattered individual works. “I am not saying all plays have a literary value, but they have a value,” Middey stresses. He recalls the time he travelled to Nagori, a village lying some distance from Dhaka. “There is a church there. In fact, the first Bengali prose, Brahman Roman Catholic Sambad was composed by Dom Antonio here.” Antonio was born a Bengali, kidnapped by Portuguese pirates, rescued by a Portuguese priest and converted to Christianity. His work was not a play though but a debate between a Brahmin and a Roman Catholic. But that is another story.

Middey points out that the writers of these Bible plays are Roman Catholic as well as Protestant. “And this is unique in itself,” he says. More syncretism.

He remembers from his childhood in Basanti in the South 24-Parganas how children and adults across faiths would come to catch a performance of the Bible natak, if only to be part of the Christmas mela or drawn by the lure of the Christmas cake. Obviously the tradition holds strong to date for Middey has recently heard that church-related cultural societies and individuals in Baruipur (South 24-Parganas), Barasat (North 24-Parganas) and Basanti have quite literally taken a leaf or two out of his Bible Natya Sanchay.

Middey shares an anecdote from his childhood. It seems about 40 years ago, in Basanti on Christmas Eve, not every Protestant church had a special service, but the Roman Catholic churches did. He says, “I was turned away from a Roman Catholic church for being a Protestant. But now, so many years on, the same church will be putting up a play from my collection.”