Hoi An was once a busy port in Central Vietnam and its Old Town has preserved a charm that has won it Unesco World Heritage status, says Supriya Newar 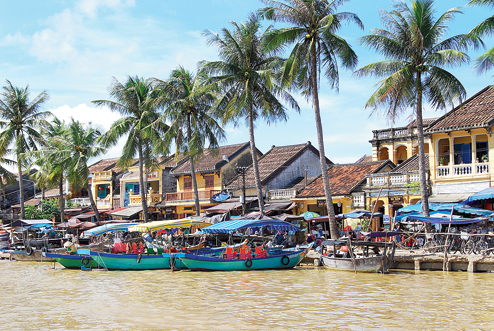 You stand warned if you’ve allocated just a day to Hoi An in Vietnam for it’s going to be hard to bid adieu to this magical little town by the South China Sea. Hoi An flourished as an all-important port under the Nguyen dynasty back in 1595 with significant trade being conducted between Southeast Asia, China, Japan and even India.

The central Vietnamese town’s mainstays were cloth, silk and ceramics, but once the French arrived, it gradually ceded its commercial glory to Da Nang which became the new trade centre, relegating Hoi An to a backwater. Fortunately, this helped it to retain its traditional charm and the result has been that in 1999 Hoi An’s Old Town won itself a Unesco World Heritage tag.

The easiest way to explore Hoi An and reach the Old Town is to simply take a rickshaw or amble through the lanes on foot, soaking in the old-world wooden architecture, guest houses and visibly slower pace of life. You could also hire a bicycle. The lanes are full of boutique hotels, shops announcing bespoke tailoring, massages and souvenir shops and before you know it, you’ve reached a point that says ‘Walking and Cycling Town’.

Even as you take the very first steps into the Old Town area, the difference is palpable. Large paper lanterns in every colour hang across tree-lined streets welcoming you. There are no motor vehicles and whenever your feet need a break, you can hire a Xichlo — a tricycle, where the driver sits behind the passenger, on a seat a notch higher, and pedals along.

The Old Town is a maze of winding lanes dotted with shops on both sides and with the River Hoai running through the centre. Art galleries and cafés abound as do wonderful shops selling bric-a-brac amidst roadside eateries and fresh coconut water vendors. As the paper lanterns are lit up, adding a soft hue, couples can be seen walking around hand-in-hand or settling down for a mojito at one of the many bustling riverside cafés.

But if there’s a river, there must be a bridge, and if there’s a bridge to be crossed, you must buy a ticket. That takes you to the other side and allows you to enter some noteworthy buildings, including an old Chinese home preserved as a mark of Chinese and Vietnamese architecture coming together.

The Chinese home turns out to be a 400-year-old windowless wooden building. We’re greeted with a warm smile and a gulp of jasmine tea as we take in various artefacts carefully preserved over the years. Ornate jade and mother-of-pearl leap out as do fine silks.

Wall markings show how high flood waters have been every year with the 2013 mark running neck-high. The home has a long, narrow structure leading to a courtyard and finally the back gate.

The famed Japanese bridge that leads to a pagoda has an interesting set of sentries at each end. One end of the bridge has a pair of stone dogs whereas the other has a set of stone monkeys. The most common theory explaining the choice of animals is that the construction started in the Japanese calendar’s year-of-the-dog and concluded in the monkey year.

The bridge’s centre is a busy place where everybody stops for pictures.

Selfie sticks jostle for space and before you can really take it all in, you’re poked by a toothless old lady selling candlelit paper lanterns to be set afloat on the river.

Beware of her charm, for as soon as you agree, you’re left with the Herculean task of getting the right change. That’s, however, a perennial challenge with Vietnam’s currency, the dong, turns you into a millionaire the minute you land. A $100 note fetches you 2,230,000 dong! The Vietnamese love zeroes on their currency and sometimes it’s hard to tell between the similar looking 20,000 dong ($1) and the 500,000 dong ($25)! The good news is though there’s tough bargaining everywhere, everyone makes it a point to patiently count and hand over the change right down to the last dong.

The other must-do when in Hoi An is to get yourself some bespoke tailoring. With every other shop announcing this service, you simply walk into any one, select material ranging from linen to fine silk, do a round of haggling and, in a couple of hours flat, they’ll have your garment sent to your hotel, stitched to perfection!

As we call it a day in Hoi An, post margaritas and wonderful river-gazing, the shops have pulled down their shutters and there are no more paper lanterns for sale. But a light drizzle makes the tree-lined roads glisten in the dark as we make our way back to our hotel.

♦ How to get there: Thai Airways and Singapore Airlines connect Calcutta to Hanoi and Ho Chi Minh City via Bangkok and Singapore, respectively. From Hanoi and Ho Chi Minh City there are short flights to Da Nang, which is an hour’s drive away from Hoi An.
♦ Where to stay: There are mumerous hotels in Hoi An, but it is better stay close to the Old Town.