A geography with history’s criss-cross 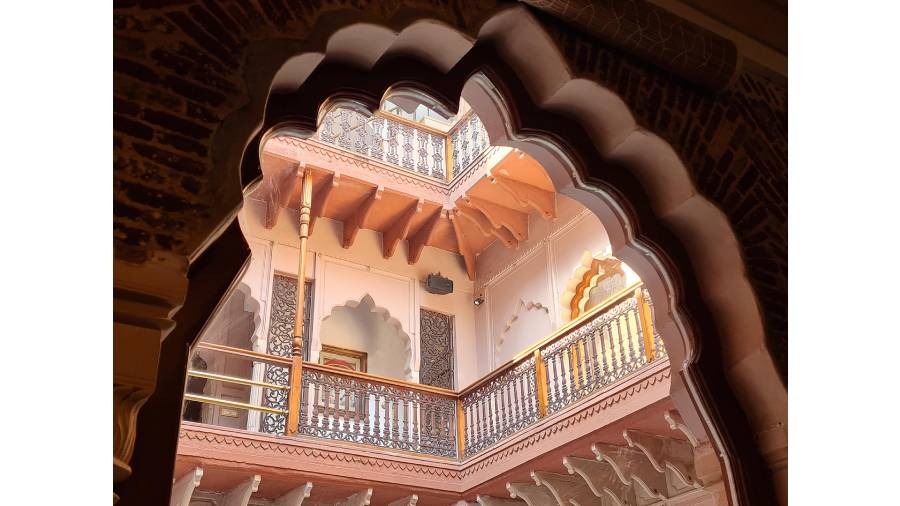 For a moment, it appeared as if a few more ancient bricks of the Purana Qila would come loose. A low, mysterious rumble — the sound was similar to a sonic boom being emitted by heavy, muscled, thudding feet — had broken out diagonally opposite the majestic Sher Shah Mandal, that 16th-century wonder that fuses, wondrously, Timurid and Safavid architectural traditions.

A closer examination revealed the source of the commotion, solving the mystery. It was a Dancing Sardar, although not quite the perfect replica of Mohenjo-Daro’s famous artefact either in terms of gender or in aesthetics. The turbaned Sardar, a young man in wedding finery, was doing a version of the Bhangra, leaving the gathering at Purana Qila wondering whether the Narendra Modi government had, at last, revoked the controversial farm laws.

Alas, that wasn’t the case. The reason for the strapping stud’s jig stood, video-camera in hand, right before him. This was, dear readers, a pre-wedding shoot unfolding with antiquity serving as the backdrop, a prop, to be used and then forgotten, the past cast into the dustbin of the present.

To the visitor’s eye, the unlikely union between modern matrimony and history seemed to be quite contagious in India’s capital city. Earlier, an idle afternoon at Lodhi Garden — amidst parakeets, predatory kites, a solitary dead tree, and the sun turning mellower — had unveiled the bizarre sight of a bride-to-be, dolled up in a gaudy lehenga-choli, traipsing past the tombs of Sikandar Lodhi and Mohammad Shah, past the magical Bada Gumbad and Shish Gumbad, her haughty, young gaze turned away — in disdain? — from stubborn, time-defying relics and architectural wizardry. Her gaze was fixed firmly on the camera faithfully on her trail, like one of GK-2’s poodles.

As the anecdote goes, Lodhi Garden’s famous palm reader, a man as ancient as the space he haunts, a man who makes a living by reading the fortunes of couples by first gently untangling their hands, may have read the crystal ball quite correctly. “Itihas yahan nahi, wahan ban raha hain.”

The word on Lodhi Road is that he meant the Central Vista.

Yet, history can endure, playing hide-and-seek on primitive, serpentine lanes. Chandni Chowk, once “renowned for its wide avenues, its elegant caravanserais… its fabulous Mughal gardens… [and] shops full of jasper and sardonynx for the Mughal builders, mother-of-pearl inlay for the pietra dura craftsmen… Bactrian

camels from Kashgar… logs of cinnamon from Madagascar… and Khemer concubines from beyond the Irrawady…”, had disappointed William Dalrymple greatly with its “municipal urinals”, “tatty warehouses”, “collapsing shop fronts” and “broken balustrades” (City of Djinns).

Perhaps, his then untrained eye had not known where to look.

This is because history need not be frozen as the tangible. It can be thawed, by noticing and by attempting to unfasten Cleo’s tricky knots — Chawri Bazar, near Jama Masjid, once the haunt of the seductive tawaif and the nautch, music and merriment, destroyed, equally, by colonial puritanism and political domination, is now making a living by selling brassware; then there is Dareeba Kalan, a treasure trove, literally and metaphorically, that still guards, jealously, the intricate art of filigreed jewellery.

History also survives as a perfume: Dareeba Kalan’s ittars can overwhelm the senses with a shocking, intoxicating sweetness, relegating — momentarily — the stench of drying vegetables, dust, the sweat of labour and human refuse to the margins of consciousness.

History survives as taste; in Chandni Chowk, eager noses are known to follow, their owners in a trance-like state, the delicious aroma of dough, oil and spices that floats in the air, landing the salivating tourist at the mouth of the Gali Paranthe Wali.

On asking the owner of Old Famous Jalebiwala about the ancestry of his shop, a grizzled face peered back over a cavernous pan in which jalebis were being fried to be wolfed down with delicious rabri and said: “Hum itihas jitne hi purane hain.”

History’s longevity can also be attributed to scripts being rewritten with, unlike the Central Vista, an impeccable fidelity to the past. A glimpse of this near-perfect union can be savoured as one walks into Haveli Dharmpura, a plush, ITC WelcomHeritage Hotel that has risen, phoenix-like, from the decaying shell of an older edifice that existed in an intestinal lane adjoining the Kinari Bazaar and Dareeba Kalan.

Here, at lunch hour, the only music that one will hear is the soft tinkling of cutlery as dishes are served or, after the food has been polished off by the guests, empty plates being removed by polite, quiet, liveried attendants, or the strange ululation of a kabootar-baaz practising his vanishing art on a neighbouring sun-lit terrace.

This music changes with the changing of the light, from day to dusk, from autumn to winter.

As evening descends, one can hear — distinctly — from the terrace of the haveli, a chime, a perfect melody, every note is in place, as the muezzin’s call from the Jama Masjid melds into the pealing bells of the Jain temples.

And all of a sudden, history and geography intersect, the past waltzing

with the present, the then fusing into the now, to offer a fleeting, hopeful vignette, of a possibility, of a future, for two Indias, the Old and the New, the Old with the New.