A chat with Gaurav Tekriwal to decode vedic mathematics 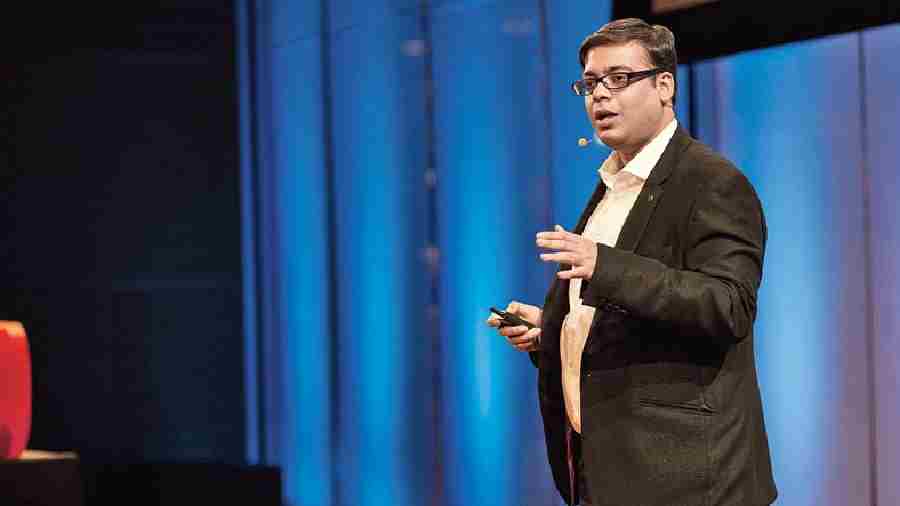 The pressure of solving long mathematical problems is a feeling known to us all. What’s 497x72? Umm! Well Gaurav Tekriwal has adopted a fun and easy way of doing maths, called Vedic Maths. Being the founder and president of Vedic Maths Forum India, the educator has been imparting Vedic Maths skills over 18 years, all around the globe. He is the author of Maths Sutras From Around The World  and Maths Sutra — The Art of Indian Speed Calculation and has spread his knowledge to 4 million students in India, South Africa, United States, Australia, UAE, Ghana and New Zealand through televised shows.

A chat with the seven-time TED/TEDx speaker who was named one of India’s Top Young Visionaries by Indiafrica and Ministry of External Affairs of India.

What is the purpose of Vedic Maths?

Vedic Maths can be said to be the world’s fastest mental maths system. In Vedic Maths you can simplify maths problems and you can make maths interesting. The children get a lot of fun doing maths, it’s no longer dull or boring. It becomes quicker and faster and the interest of maths is retained.

Tell us the history behind it...

It was discovered by an Indian saint, Tirthaji (Jagadguru Shankaracharya Shri Bharati Krishna Tirthaji Maharaja). And he had written a book called Vedic Mathematics where he gave a few formulas by which you can solve mathematical problems with simplicity.

So you stumbled across the book and that’s when you dived into Vedic Maths?

Yes, I did stumble upon the book about 22 years back. It was given to me when I was preparing for CAT by my mother. Because I studied the book it was quite overwhelming to see the method and the simplicity and speed of it. So after a few years of practising Vedic Maths I decided to pursue my career in it and I became a Vedic Maths teacher. Now everything has evolved, we lead a team of over a 100 teachers, from Calcutta, and we teach Vedic Maths.

Is Vedic Maths a way to replace how we traditionally do maths?

Vedic Maths does not seek to replace the traditional maths system. In fact, it seems to complement it. If you’re appearing for a competitive examination, you need to do lots of sums in less time. That is where Vedic Maths steps in. Also Vedic Maths helps to check the answers. It can make your score greater and get better grades compared to traditional maths.

How are students responding to Vedic Maths?

When I teach students , they are overwhelmed and they are so excited by the method since I show it to them... they do it mentally. So they tell me it should be used in schools. And when I teach the older trainers and teachers, they tell me, ‘Where were you? We couldn’t find you earlier in life?’ (laughs). Everybody from ages eight to 80 love Vedic Maths.

How much of the country has adopted Vedic Maths?

So the Samagra Shiksha Abhiyan, which is conducted by the Government of India... in about three to four states it has been implemented. We have worked closely with Dadra, Nagar Haveli, Daman and Diu to implement Vedic Maths over the last two years for the government schools in those union territories. Also the Gujarat government has announced that they would be implementing Vedic Maths from 2023. Same with the Himachal Pradesh government.

Vedic Maths apparently also helps you maintain a positive mental health. How does that work?

Everybody is scared of maths, right? Not only students but even us. It does give you a lot of mental health issues because you get into depression. They get exam stress, there is a big phobia about maths. So Vedic Maths helps in making your mental health better because you get pally with maths. You make maths fun and interesting. Recently I had interviewed one of the prominent mental health practitioners in the US, from Harvard Business School. We did a podcast together where he said that Vedic Maths does improve mental health. You deal with exams better.

Could you give us an example as to how it works?

For a very simple example, suppose you have to do 32x11. All you need to do is create a space between the 32. So you do three plus two which is five. So you put five in the middle of 32 so it becomes 352. The same thing happens when you do 45x11 as well. There are two kinds of methods in Vedic Maths. One is a general method, which is applicable for all the numbers. Then there are these special cases which are applicable to some of the numbers. And that is where the beauty of a system like Vedic Maths comes in because even when you have a general method you can solve a problem in many different ways.