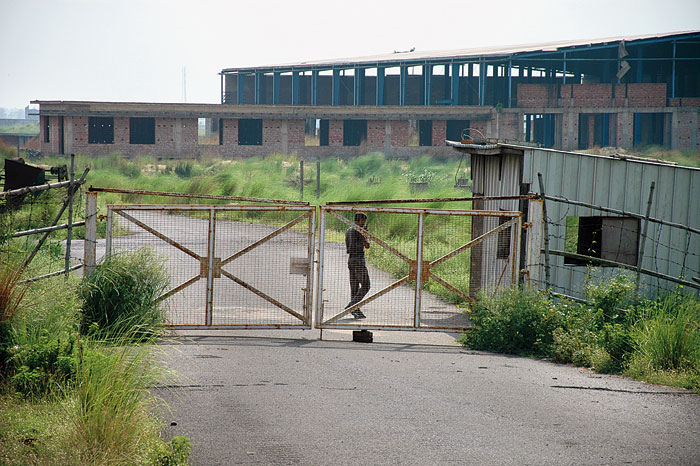 The controversy over land acquisition for the Nano car project at Singur is back under the arc lights
Telegraph file picture
Sambit Saha   |   Calcutta   |   Published 29.11.19, 07:27 PM

The controversy over land acquisition for the Nano car project at Singur is back under the arc lights.

The Tatas have decided to press their claim for compensation after the project was nixed by a popular protest orchestrated by the Mamata Banerjee-led Trinamul Congress when it was in the Opposition.

An arbitral panel comprising three retired judges will shortly decide whether there are any legal grounds under which the Tatas can press their claim for compensation, especially after the Supreme Court passed a verdict on August 31, 2016 declaring the land acquisition for the car project as null and void.

Tata Motors is pressing its claim for compensation for an amount that is a little under Rs 1,000 crore from the WBIDC, a Bengal government entity entrusted with the task of promoting industry in the state.

The WBIDC had leased out 997.11 acres of land at Singur to Tata Motors for the small car plant after signing an agreement in 2007.

The Tatas are pressing their claim on the basis of a clause in the agreement that had provided them indemnity against any infirmity in the lease title — and an arbitration clause that could be activated if there was any dispute between the parties. The arbitral panel comprises Aloke Chakrabarti and Jayanta Kumar Biswas, two retired judges of Calcutta High Court representing Tata Motors and the WBIDC, respectively. Former Supreme Court Judge V.S. Sirpurkar is the presiding arbitrator.

The panel will pronounce its decision on whether it can arbitrate in the dispute between Tata Motors and the WBIDC. The WBIDC has challenged the validity of the arbitration clause in the agreement on the ground that the apex court had declared land acquisition as null and void, which would invalidate the lease deed signed between the two parties in 2007. “We cannot comment on this as the matter is sub judice,” a Tata Motor spokesperson said. The WBIDC officials were equally reticent.

The Tatas moved the plant to Sanand in Gujarat citing a law and order problem in 2008. It is now seeking compensation from the WBIDC, which has denied the claim apart from challenging the validity of the arbitration, especially in the light of the Supreme Court judgment.

The apex court had struck down the land acquisition conducted by the WBIDC in 2006, under the erstwhile Left Front government, on the ground of procedural lapses.

Simultaneously, the Supreme Court had directed the government of the day to return the land to their original owners, handing a major victory to Mamata Banerjee’s Trinamul Congress, which had come to power in Bengal in 2011.

After the apex court verdict, when Tata Motors approached the WBIDC seeking compensation by trying to invoke the arbitration clause in the lease deed, the state agency rejected the plea. The WBIDC argued that the clause had lapsed along with the lease agreement as the apex court had struck down the land acquisition itself.

Dissatisfied, the auto major invoked arbitration and appointed retired Supreme Court judge Ashok Kumar Ganguly as its arbitrator and demanded that the WBIDC nominate someone as well. When the state agency did not do so, the company moved Calcutta High Court urging it to direct the WBIDC to nominate an arbitrator under Arbitration & Conciliation Act, 1996.

The state agency then informed the court that it disapproved of Tata Motors’ choice of arbitrator. This prompted the court to ask the WBIDC if it was prepared to nominate an arbitrator if the car maker picked someone else.

After this, Tata Motors Ltd (TML) named retired Justice Chakrabarti and the WBIDC opted for Justice Biswas as their respective arbitrators — and the high court accepted the nominations. “The nominees are appointed arbitrators, who subject to requirement of section 12, will nominate the third arbitrator in terms of the agreement and thereafter proceed with the reference,” Justice Arindam Sinha wrote in his judgment delivered on March 28 this year. The judgment also clarified that “the court has not entered into the merits of the contentions urged by parties”.

After the formation of the arbitral panel, TML filed a claim of close to Rs 1,000 crore, which included an investment of Rs 440 crore at Singur to establish the plant — a sunk cost that was never recovered — as well as interest and legal costs.

The state agency filed a counter-claim seeking around Rs 200 crore from the Tatas. It claimed it had spent the amount on land acquisition, development and associated infrastructure such as the provision of electricity. The WBIDC also filed a petition before the panel questioning the validity of the arbitration process itself. On Monday, the panel is expected to adjudicate on that aspect.

Tata Motors is banking on the indemnity clause in the lease deed to push its case, which reads: “If a court or any other authority holds/declares that the land acquisition or any part thereof for acquiring said land/or demised land has not been in accordance with the provisions of law or gives any adverse order which prevents the development/use of the said land or demised land by the lessee, then, notwithstanding what is stated elsewhere in this lease deed without any prejudice to the lessee’s rights in law, the lessor shall indemnify and compensate the lessee for any losses as may be suffered”.

The Telegraph had previously reported that TML had written off Rs 309.99 crore from its balance sheet on account of Singur.

Even as Tata Motors, which posted a loss of Rs 1,281.97 crore in the second quarter ended September 30, pursues a legal course, the salt-to-software conglomerate’s involvement in Bengal has been growing.

TCS, the largest entity in the Tata group, operates one of its largest software operations in Calcutta, employing close to 40,000 people. It recently acquired additional land at Rajarhat.

Tata Long Products Pvt Ltd has decided to shift its headquarters from Odisha to Bengal, while another group firm, Tata Hitachi, shifted a large operation from Jharkhand to Kharagpur.