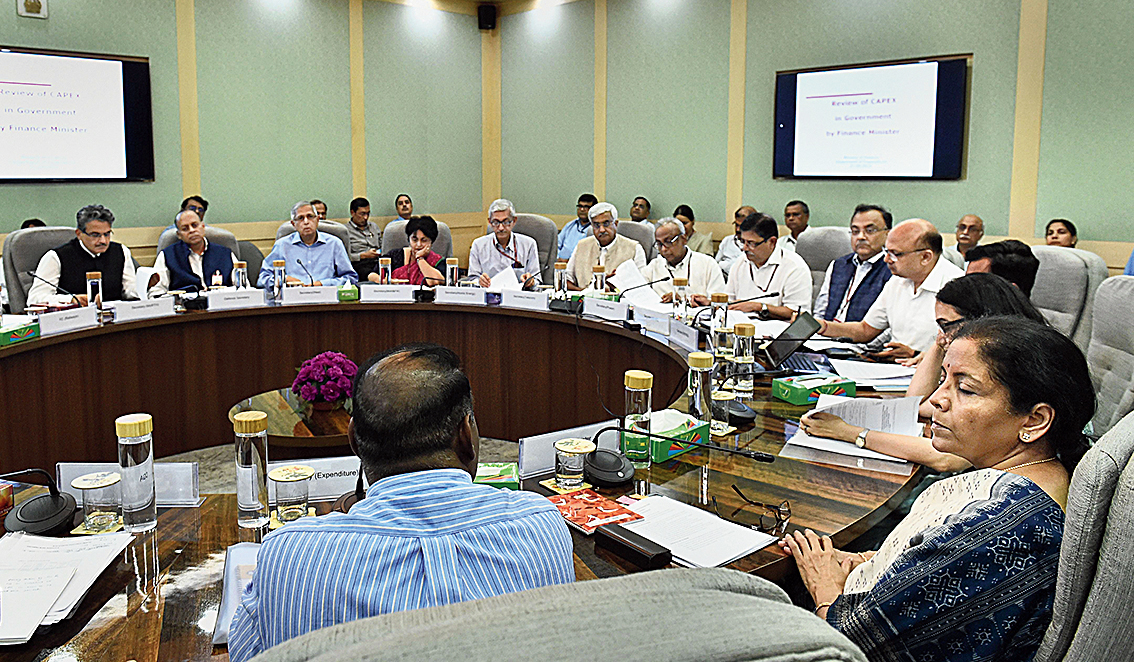 The finance ministry on Friday asked the infrastructure ministries to prepare their capital expenditure plans for the next four quarters and fast-track pending payments to various agencies to boost capex in the economy.

The move comes amid concerns that the government’s capital expenditure could be lowered because of the Rs 1.45-lakh-crore revenue loss on account of the recent corporate tax cut.

After meeting 21 major infrastructure ministries to review the progress in spending, finance minister Nirmala Sitharaman said the government’s capital expenditure was on track and asked the ministries and the PSUs to clear all non-litigation dues at the earliest to keep the investment and consumption cycles active.

She emphasised that all outstanding payments must be cleared before the festival season.

Sitharaman also said around 90 per cent of the GST dues, as on August 23, has been cleared while asserting that consumption will be strong during the festive season.

The minister will also meet the heads of public sector enterprises on Saturday.

“We will have a separate meeting with different agencies of public sector undertakings and other agencies which come under different ministries,” she said.

To a query on fiscal discipline following the rebate in corporate tax and expenditure, the minister said the government will reconcile the fiscal deficit numbers later.

Friday’s meeting was part of a series of meetings held by the expenditure secretary to review capex as well as to ensure that due payments to contractors and MSMEs are cleared.

“The FM’s message that the government’s capex is on target is encouraging. This reassures that there will be no cutback on capex to meet budgetary targets in light of the revenue loss from corporate tax cuts. The government has done its part and now it is for the private sector to follow up to bring in some acceleration,” said Madan Sabnavis, chief economist of Care Ratings.

Expenditure secretary G. C. Murmu said of the total dues of about Rs 60,000 crore, Rs 40,000 crore has been cleared. The remaining amount, which is not involved in litigation, will be cleared by the first week of October.

This meeting assumes significance amid concerns raised by micro, small and medium enterprises (MSMEs) that their payments were not being cleared by the different wings of the government on time.

“The government should not sit on overdue payments,” Sitharaman said, adding the money should go to the people who have been waiting for it. The money should reach the ground, she added.

The Centre’s expenditure, both revenue and capital, provides a major boost to aggregate demand.

Besides, the government has also allocated grants of Rs 2.07 lakh crore to create capital assets, taking the amount available for capex for 2019-20 to Rs 5.45 lakh crore .

Ministries have also been sanctioned Rs 0.57 lakh crore extra budgetary resource, of which Rs 0.46 lakh crore has been approved.

Murmu said meetings with the ministries/departments to assess revised estimates for 2019-20 and the budget estimates for 2020-21 would be initiated from the middle of October 2019.