Shared office place operator Smartworks is eyeing around Rs 120 crore from investors to maintain its stronghold in the coworking space industry, the fastest growing segment in commercial real estate. 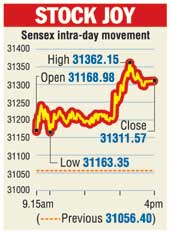 Calcutta: Shared office place operator Smartworks is eyeing around Rs 120 crore from investors to maintain its stronghold in the coworking space industry, the fastest growing segment in commercial real estate.

Founded by youngsters Harsh Binani and Neetish Sarda, the Gurgaon-based company is in talks with private equity players for the stake sale which may conclude this fiscal.

Sarda declined to name the probable investors or the share of equity on offer. "We will close the year with one-million--square-foot space. The target is to reach 5.5-million-square-foot in five years. Capital will be required in acquiring property, fit-outs, technology and marketing," Sarda said.

Smartworks' quest for capital comes on the heels of competitor Awfis raising $20 million in Series B funding from Sequoia Capital earlier this year. Bullish predictions by international property research firms have also emboldened the founders.

JLL predicted 50 per cent growth of leased "alternative" work space in 2017. "Coworking is expected to receive $400 million in investment by 2018," Ramesh Nair, country head of JLL has said in a study, titled "Future of Work: The Coworking Revolution".

The market size for the coworking segment across India is in the range of 12-16 million seats. The demand is no longer limited to freelancers or start-up employees. Small emerging businesses as well as large corporates are also looking at this option.

Sarda cited the example of Tata Communication, which was looking for a 40,000-square-foot space in Pune earlier this year. Smartworks convinced them to come to its centre but with only 28,000sqft area. "Eventually, they got access to 44,000sqft, which is bigger than they what were initially looking for, but at a much less cost," Sarda explained.

Operating out of seven centres and 4,20,000sqft area - the largest being in Sector V, Calcutta, with 180,000sqft - Smartworks has large companies such as ArcelorMittal, Hitachi, Lenovo and Daikin as its clients.

It is building spaces in five more centres covering 2,50,000 sqft, apart from looking at a 50,000sqft building in the central business district of Calcutta. Also on the cards are entry into smaller cities, such as Bhubaneswar, Coimbatore and Ahmedabad by the end of this fiscal.

Sarda explained savings will be both on cost and space sides.

"For instance, the tenant may not every day need large conference hall, auditoriums or meeting rooms. These can be shared on a pre-booking basis. The tenant does not to have to pay for the entire common space but gets access to it at," he explained with the Tatas in mind.

While trying to woo clients to its centre, Smartworks will have to slug it out with some of large real estate-backed players such as WeWork (backed by Embassy group of Bangalore) and CoWrks (backed by RMZ of Bangalore).

However, the industry is still fragmented as suggested by a CBRE research.

According to CBRE, there are 350 shared office operators in India working out of 800 locations mostly in Bangalore, Delhi, Gurgaon, Noida, Mumbai, Pune, Chennai and Hyderabad.

According to the JLL note cited above coworking operators in the top cities could potentially stand at 7-9 million sq. ft. by 2020 because of the cost advantage they will provide as office rental costs continues to rise across India's business districts. "Coworking spaces can lead to a 20-25 per cent cost savings as opposed to working in the traditional office spaces," Nair said in the report.