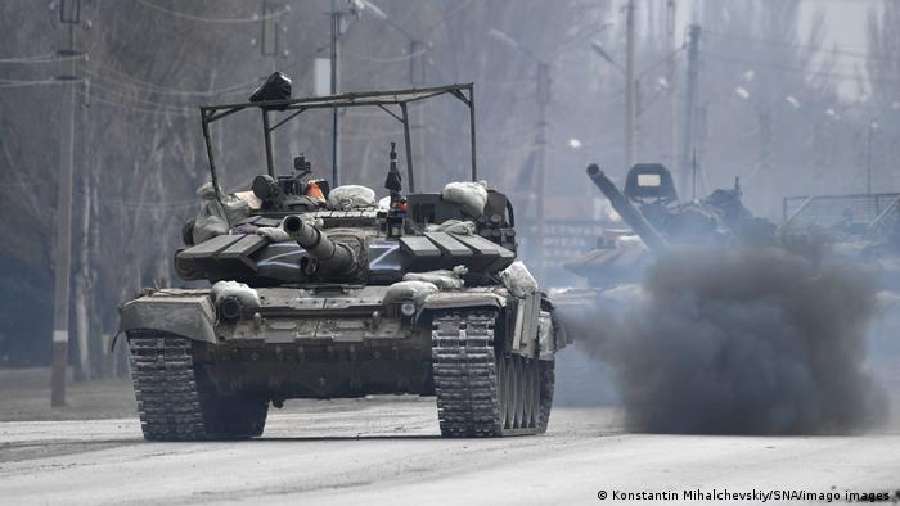 The Russian assault comes at a bad time for India’s economy which has been recovering more slowly than expected from its pandemic hammering.
File picture.
Paran Balakrishnan   |   New Delhi   |   Published 01.03.22, 06:56 PM

India abstained on the US-sponsored UN Security Council “deploring” Russia’s invasion of Ukraine. But we definitely won’t be able to stay on the sidelines when it comes to facing the economic consequences of the war, the most serious conflict in Europe since the second world war.

India’s not a part of organisations like Nato whose members like the US and EU are imposing punishing economic sanctions on Russia. But this country will be hit either directly or indirectly by these measures. The conflict will slow economic recovery, drive up inflation, ratchet up energy prices, pile pressure on the battered rupee, already one of Asia’s worst performing currencies and produce wild swings on financial markets. And that’s just for starters.

Economists and the government now have had some time to look at the potential economic fallout from Russia’s massive military action against Ukraine and the sanctions imposed on the country and they say India’s going to be among the worst-hit nations in Asia.

The Russian assault comes at a bad time for India’s economy which has been recovering more slowly than expected from its pandemic hammering. Third-quarter GDP figures released late Monday showed the economy grew by 5.4 per cent, way below the consensus forecast of 6.0 per cent, hit by a sharp fall in manufacturing output.

Finance Minister Nirmala Sitharaman, without giving any forecasts, is already warning that “When value chains are facing challenges and threats because of these disturbances, our recovery, not just for India, but countries everywhere will be severely hampered.”

The invasion will lead to a sustained rise in oil and food prices globally that’s likely to hurt Asia’s economies and under “such a scenario, India, Thailand, and the Philippines are the biggest losers,” say Nomura economists Aurodeep Nandi and Sonal Varma in a report. When households have to spend more of their incomes on food and fuel, then they have less money for consuming other goods.

The Nomura report forecasts higher inflation, weaker current accounts and worsening fiscal balances which all add up to a “squeeze on economic growth,” Nandi and Varma say. All this is clearly not good tidings for India which had been counting on inflation coming down and growth accelerating sharply to lift the country out of the deep downturn created by the pandemic.

Says Ajay Sahai, director-general of the Federation of Indian Export Organisations: “The crisis has come at the most unfortunate time when we are just coming out of Covid-19. It has added to uncertainties of trade not only with Russia and Ukraine but with the entire CIS region.”

Vivek Kumar, an economist at data analytics firm QuantEco, notes that the invasion has already pushed up energy prices globally as Russia is the world’s third biggest oil exporter globally. Also keep in mind that the government’s just-released budget assumes a global crude price of $70-$75 a barrel and it’s now riding close to $100. Some analysts are looking at oil prices of $120 in the not-so-distant future. “This will impact India’s fuel inflation,” Kumar says.

Now, let’s look at what the central bank estimates as the consequence of each $10-per-barrel rise in the price of crude oil. It hikes inflation by 1.76 percentages points, shaves up to 0.3 percentage points off growth and deepens the current account deficit by a massive $910 billion. The surge in oil prices “poses considerable risks to the Indian economy” is the verdict of Bank of Baroda economist Aditi Gupta.

Inflation has already emerged as a significant problem for the economy and is piling pressure on already tight household budgets. Retail inflation hit a 7-month high in January of 6.1 per cent -- breaching the central bank's tolerance level -- on the back of rising food prices and wholesale price inflation has been in double digits for 10 straight months. Normally the central bank would start raising interest rates to curb inflation but the post-pandemic need for economic recovery could take rate hikes off the table.

For instance, if the crisis lasts for a while, there will be a knock-on impact on costs of sunflower oil (Ukraine and Russia account for an overwhelming 90 per cent of India’s sunflower oil imports); fertilisers (Russia and Belarus right now account for a third of India’s total potash imports); palladium which is used as an input for gems and jewellery and electric vehicles. Russia also is the largest exporter of urea and it accounts for some 34 per cent of global wheat exports so disruptions in supply will drive up prices internationally. On wheat, however, there’s the positive that India may be able to export more at higher prices.

Then, there’s the whole issue of trading with Russia in dollars with the US after the EU, the US and other Western nations like Canada decided to cut several Russian banks from the international SWIFT or Society for Worldwide Interbank Telecommunication payment system.  This will hinder nations that trade with Russia from doing business in major currencies.

India’s exploring ways to boost its rupee-rouble trading arrangements so it can get around the currency sanctions. This involves Russian banks and companies having accounts with state-run Indian banks for trade settlement. (India has used this route to trade with sanction-hit Iran). Sahai points out, however, that the wind-down clause in the US Office of Foreign Assets Control (OFAC) should give exporters time to execute orders and also receiving payments.

India’s non-military imports from Russia totalled $8.6 billion last year and consist principally of oil, fertiliser, coal, precious stones and precious metals. India’s exports which totalled $3.3 billion involve mainly tea, coffee, electronics, iron and steel, auto parts and pharmaceutical products. (Medicines are not included under the sanctions so India’s flagship pharmaceutical sector which exported $542 million worth of products to Russia isn’t affected, though of course getting the products to the conflict zone may be harder).

Domestic exporters are a worried lot. Sahai says he’s especially worried about freight costs, which have soared during the pandemic period as ships have become backed up at ports. Now they are likely to rise even further.

Lastly, but very much not least, there are concerns about the potential knock-on effect on defence deals and military cooperation with Moscow. Russian arms are the lynchpin in the government’s plan to modernise the armed forces. In 2021 alone, India signed or was negotiating with Moscow defence pacts worth more than Rs 1 trillion. There are some big contracts pending and whether they can be fulfilled is a key strategic worry given the ongoing military threats posed by China and Pakistan.

First off is the $5.4-billion deal for five units of the S-400 air defence system, Russia’s most advanced long-range surface-to-air missile defence system. We’ve received the first one but still are waiting for delivery on the other four. India signed the deal back in October 2018 despite advice from then-President Donald Trump’s administration that the agreement could be hit by future US sanctions. We also have deals with Russia for new Kalashnikov assault rifles to replace Insas rifles introduced over 30 years ago, four frigates and the leasing of a nuclear power submarine, a key element in our defence programme, slated for delivery in 2025. As well, talks are at an advanced stage for leasing a second submarine. These talks may be put on hold as we wait to see how the Russia-Ukraine situation plays out.

Also, critically, Russia is the source of all those spare parts for the weapons that it’s sold us in the past. Russia has been a military partner for decades and some 70 per cent of our weaponry is of Russian origin.  Not only that, due to our long association with Russia, our military cooperation involves joint research, development and production of advanced defence systems, all activities that now face disruption.

What’s clear is that Russia’s defence sector will be hit by sanctions imposing curbs on imports of technologies and exports of finished weaponry that could affect its capacity to meet our export orders. We will have to see how much those sanctions will also indirectly or directly affect us. For instance, one of the big hurdles could be CAATSA – Countering America’s Adversary Through Sanctions – if we proceed with weapons purchases from Moscow.

Also, we have some big investments in Russian oil and gas blocks. ONGC Videsh, has invested in Sakhalin-1. Western companies like BP are getting cold feet about their Russian involvement in Russia’s energy sector. Calling out “Russia’s act of aggression,” BP has just announced it will offload its 20 per cent stake in Russia’s Rosneft after concluding it “simply cannot continue” its involvement in the Kremlin’s oil company. The British oil giant says it will take a hit of up to $25 billion as a result of its move. Late last year, ONGC, IOCL and India Oil were seeking to invest jointly in the massive Vostok project of Rosneft, according to Mint newspaper. The companies had completed the technical evaluation of more than half of the 52 license areas of the project, Mint said. It’s not known how the latest developments might affect those plans.

“This Ukraine situation is evolving daily, but the worse the war gets and the longer it lasts, the harder it’s going to be for things to return to normal. The truth is nobody has a clue how bad or messy things could get,” said one Mumbai brokerage analyst speaking on condition of anonymity.