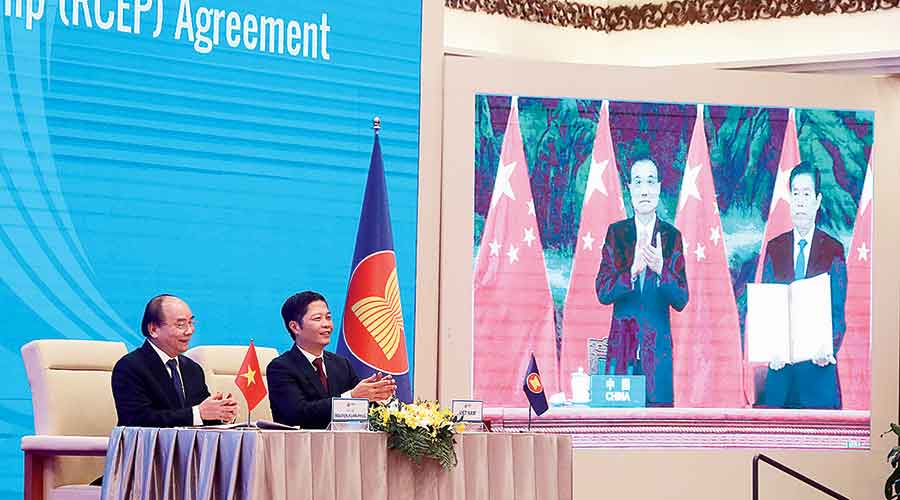 Fifteen Asia-Pacific nations, including China, on Sunday signed the world’s biggest trade agreement, the Regional Comprehensive Economic Partnership (RCEP), sans India, with hopes that it will help recover from the shocks of the Covid-19 pandemic.

The RCEP was signed after eight years of negotiations at the conclusion of the annual summit of Southeast Asian leaders and their regional partners, held virtually this year because of the Covid-19 pandemic.

The agreement, which covers almost a third of the world economy, will progressively lower tariffs across many areas in the coming years, reported Channel News Asia.

After the signing, all countries would have to ratify the RCEP within two years before it becomes effective.

India, one of the leading consumer-driven market in the region, pulled out of talks last year, concerned that the elimination of tariffs would open its markets to a flood of imports that could harm local producers.

But other nations have said in the past that the door remains open for India’s participation in the RCEP, influenced by China.

The RCEP was first proposed in 2012 and loops in 10 Asean economies — Indonesia, Malaysia, the Philippines, Singapore, Thailand, Brunei, Vietnam, Laos, Myanmar and Cambodia — along with China, Japan, South Korea, New Zealand and Australia.

Singapore Prime Minister Lee Hsien Loong said he joins fellow RCEP countries “in hoping that India too, will be able to come on board at some point so that the participation in
the RCEP will fully reflect the emerging patterns of integration and regional cooperation in Asia”. They make up nearly a third of the world’s population and account for 29 per cent of global gross domestic product, he said.

Countries that have signed the RCEP agreement can start negotiations with India for joining the pact once New Delhi submits a written request stating its intention for the same, according to a declaration.