Cost up 20 per cent in the last three months 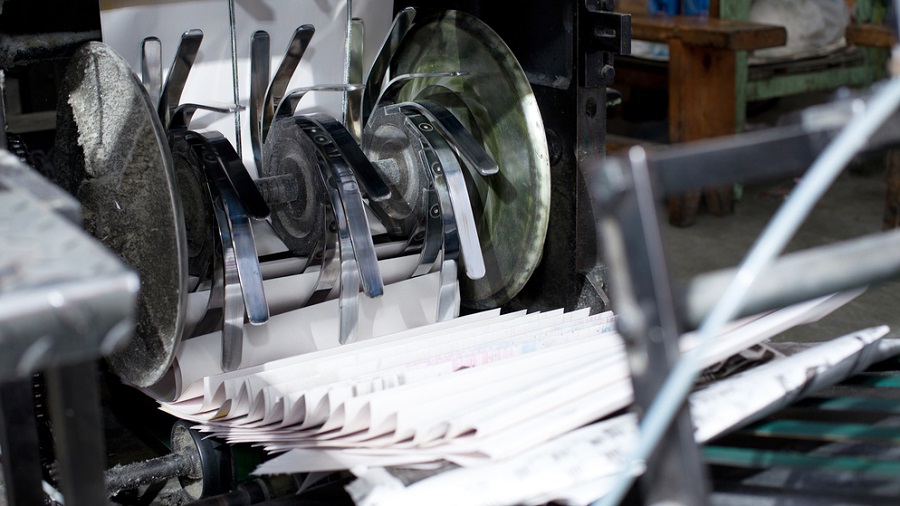 It is estimated that the print media would take two or three years to recover from the current situation
Shutterstock
Our Bureau, Agencies   |   New Delhi   |   Published 16.01.21, 06:40 PM

Newsprint cost has jumped 20 per cent in the last three months due to demand-supply imbalance post-pandemic, prompting news publishers to petition the government for waiver of 5 per cent import duty to help cut cost.

The industry has been hit hard due to COVID-19 led disruptions and the most newspapers have stopped sending newspapers to rural areas where there is less than 50 copies to reduce the distribution cost, said the Indian Newspaper Society (INS) President L Adimoolam.

In a representation to the Finance Minister Nirmala Sitharaman on Thursday ahead of the forthcoming union budget, INS has suggested to take steps as to reduce the customs duty on import of newsprints, a stimulus package for the industry or at least to help the publications by releasing advertisement with an increased tariff of 50 per cent.

"If working out a stimulus package for print media is difficult at this juncture, DAVP (Directorate of Advertising and Visual Publicity) may please consider releasing advertisement for all its departments to all publications with an increased tariff of 50 per cent, which would be highly helpful for the industry as a whole," the INS representation said.

It has also asked to extend the validity of RNI (Registrar of Newspapers for India) Circulation Certificates up to March 31, 2022 which will enable DAVP rates to remain the same till next year.

It is estimated that the print media would take two or three years to recover from the current situation, the INS added.

When asked about the situation, Adimoolam told PTI: "We have been asking for the stimulus package. The government is helping a few industries with stimulus packages. We are (also) expecting some stimulus."

Several newspapers have taken cost-cutting efforts and many editions are closed, the number of pages have been reduced and people have lost jobs. Several small papers have also closed down, Adimoolam added.

According to him, the newspaper distribution has become very costly.

"Sending newspaper to remote and small villages is being slowly reduced. The newspaper reaches only to a nearby town. Villages would be deprived of the news," he said.

After the pandemic, reportedly 3 million tonnes of newsprint capacities have been closed or converted to brown paper grades worldwide, resulting in a demand-supply imbalance.

The Indian publishers continue to be dependent on imported newsprint, due to insufficient domestic capacity/output and poor quality.

"Prices of newsprint have shot up by 20 per cent in the last 3 months. Another increase of 10-15 per cent is in the anvil next month which will severely impact the Publishers," said the INS in the memorandum adding that domestic producers are severely under-stocked on their raw materials to supply adequate quantities.

Requesting to remove 5 per cent customs duty from import, the INS said it will utmost yield Rs 200 crore to the government exchequer in the next fiscal year.

"But in view of the grim situation, it would be a great relief for the print industry, if the government can consider abolishing the Customs Duty on import of newsprint, it said.

However, the Indian Newsprint Manufacturers Association (INMA), which represents newsprint industry such as Emami Paper Mill, Khanna Paper and Shree Rama Newsprint, has said that enough capacity is available and the domestic industry is having full potential to provide unstinted support to print media.

"Domestic industry has full potential to meet the demand in terms of quantity and quality. During COVID-19 lockdown, it is the only domestic industry which came forward to support consumers," said INMA Secretary-General Vijay Kumar.

The domestic new print industry is facing the issue of under-utilisation of the installed capacity as more than 75 per cent market share of the newsprint has been captured by cheap imports and dumping in India by the foreign companies.

When asked about the reason for such situation, Kumar said import duty exemption was availed by spreading a false narrative about domestic produce.

"Encouraging unethical import trade including stock and trade business dissuading domestic produce for want of cheap imports a demand-supply gap was created. Such exemption and unethical imports denied a level playing field to the domestic industry," he added.

The INMA has also filed anti-dumping plea and an investigation was initiated by Directorate General of Trade Remedies (DGTR) on January 20, 2020, and final measures are awaited.

"We understand that DGTR has sought an extension of 5 months for completing their study on the anti-dumping case on newsprint. We request this extension of time be allowed to DGTR for them to comprehensively study the case and submit their final report," said INS adding that it is hopeful that the report will establish that newsprint of 42 gsm (grams per sq metre) and below to be exempted from anti-dumping as the same is not made in India.

Even the quality of other grades of newsprint is very poor as compared to the imported newsprint, it added.

As per the information available on the website of the INMA, the present domestic capacity of newsprint industry is 2.2 MTPA (million tonnes per annum) and over 1.5 MTPA is underutilisation due to continuous offloading of cheap imports.

However, Adimoolam said "it's not true. Almost 100 per cent newsprints produced by the Indian manufactures are being consumed. Only the balance is imported."

The Indian newsprint industry produces newsprints below 45 gsm and the most of the newspapers in India now use 40 gsm and 42.5 gsm, Adimoolam said.

"Instead of 40 gsm, you would have to use 45 gsm (Indian newsprints) and it creates a 12 per cent difference in the cost. Moreover, quality of the Indian newsprints can not be compared with the international quality," he said adding that now the newspaper industry uses the high-speed machine for printing and the domestic newsprint has issues with that.

Moreover, the Indian newsprint manufacturers still follow the BIS standards of 1990, which is almost three decades old, he added.

The Indian newspaper industry required 2.5 MTPA and the domestic production is around 1 MTPA and the balance 1.5 MTPA is being imported by the publications, Adimoolam added.