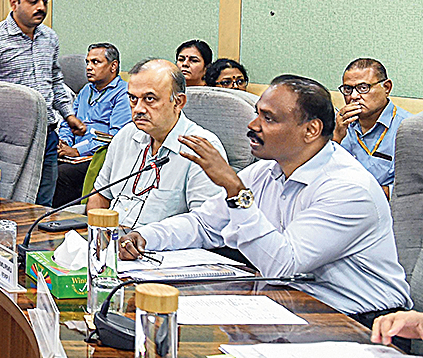 The finance ministry on Friday asked the bigger PSUs to stick to their capital expenditure plans and ensure prompt payments to vendors.

“The government has asked the heads of large PSU companies to stick to their respective capital expenditure plans and speed up their investment activities. The finance ministry will also monitor the release of payments for procurements and other contracts immediately, which would help to pump in liquidity in the system. The payments held up because of disputes are also to be resolved soon,” the ministry of finance said in a statement.

The measures followed similar steps announced recently to boost investment and demand in the economy.

The meeting, co-chaired by economic affairs secretary Atanu Chakraborty and expenditure secretary G.C. Murmu, was attended by the financial advisers of infrastructure ministries.

The meeting reviewed the capital expenditure plans of the PSUs.

“They (PSUs) were impressed upon to adhere to the expenditure plan and accelerate investment activities,” it said.

“The ministry of finance will constantly monitor the progress of large infrastructure projects and follow-up meetings will be held,” the release said.

After the meeting, ONGC executive director N.C. Pandey said as many as 27 projects worth Rs 87,000 crore were on stream. These projects would be completed in three to four years, he told reporters.

“We are on track. We are hopeful that these projects will be completed on time,” he said.

Last week, the expenditure secretary and the economic affairs secretary had co-chaired a meeting with the heads of large CPSEs and officials of the MSME ministry.