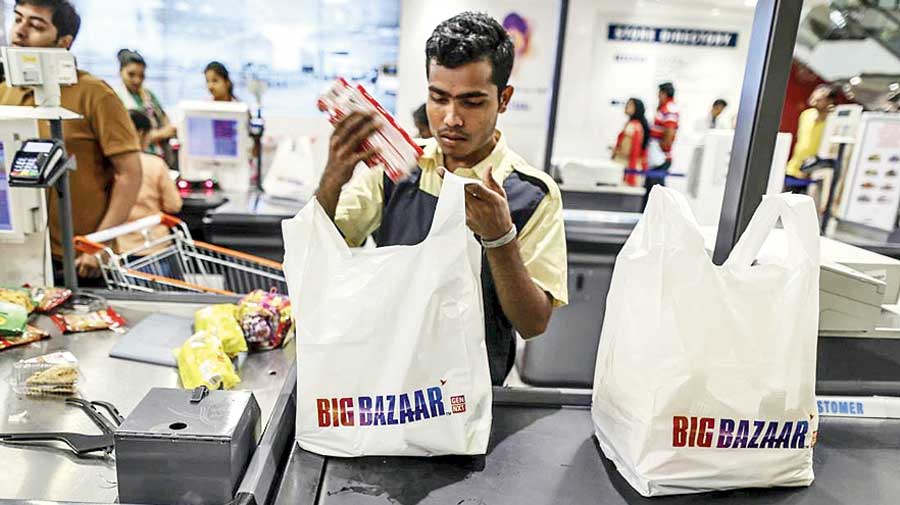 Online retail giant Amazon had last year acquired a 49 per cent stake in Future Coupons Ltd, the promoter entity which owns a 7.3 per cent interest in Future Retail, the operator of more than 1,500 stores in India including grocery chain Big Bazaar.
File picture
Our Special Correspondent   |   Mumbai   |   Published 27.10.20, 12:07 AM

Reliance Industries Ltd (RIL) and the Future group are digging in their heels even as Amazon.com Inc won an interim award against the latter with regard to the sale of its retail business to Mukesh Ambani.

Future Retail (FRL) on Monday hinted that it may challenge the arbitration award before Indian legal forums, to ensure that the Rs 24,713 crore deal with Reliance proceeds unhindered and without any delay.

Late on Sunday, Reliance Retail Ventures Ltd (RRVL), said that it has entered into the transaction for acquisition of assets and business of FRL “under proper legal advice and the rights and obligations are fully enforceable under Indian Law’’.

RRVL added that it intends to enforce its rights and complete the transaction in terms of the scheme and agreement with the Future group without any delay.

Amazon had won an interim award against the transaction after a Singapore-based single judge arbitration panel put the deal on hold. The global retail giant had alleged that the asset sale violated a contractual agreement.

FRL said that it has received a communication from the Singapore International Arbitration Centre (SIAC) in the arbitration proceedings under shareholders’ agreement between Amazon, Future Coupons Private Limited and the promoter group.

“FRL is examining the communication and the order. It may be noted that FRL is not a party to the agreement under which Amazon has invoked arbitration proceedings.

“FRL has been legally advised that actions taken by the FRL/its board, which are in full compliance of the relevant agreements and eminently in the interest of all stakeholders cannot be held back in arbitration proceedings initiated under an agreement to which FRL is not a party,’” it said.

The company added that as per the advice received by it, all relevant agreements are governed by Indian law and provisions of Indian Arbitration Act for all intents and purposes.

“This matter raises several fundamental jurisdictional issues which go to the root of the matter. Accordingly, this order will have to be tested under the provisions of Indian Arbitration Act in an appropriate forum. In any enforcement proceedings, FRL would take appropriate steps to ensure that the proposed transaction will proceed unhindered without any delay,” it noted.

However, the development impacted the share prices of Future Group firms and RIL. Shares of the Future Group declined by up to 10 per cent. While Future Lifestyle Fashions tanked 9.71 per cent to Rs 78.15 on the BSE, Future Retail fell by over five per cent to Rs 73.85 even as Future Enterprises fell 4.99 per cent to Rs 9.53 -- its lower circuit limit.

Similarly,  Future Consumer Ltd also dropped by 4.92 per cent to its lowest trading permissible limit for the day of Rs 7.54 on the BSE.

Online retail giant Amazon had last year acquired a 49 per cent stake in Future Coupons Ltd, the promoter entity which owns a 7.3 per cent interest in Future Retail, the operator of more than 1,500 stores in India including grocery chain Big Bazaar.

Amazon’s investment in Future Group came with contractual rights that include a right of first refusal and a non-compete-like pact.

Also, the deal came with the right to buy into their flagship, Future Retail, after a period of between 3 years and 10 years.

Commenting on the SIAC interim order, Sweta Patodia, analyst, corporate finance group, Moody’s Investors Service, said: “SIAC’s decision to put a stay on the sale of Future Group’s consumer business to RIL is unlikely to impact the latter’s credit profile, given its position as the leading retailer in India and its strong financial position.

“Nonetheless, the decision will likely delay RIL’s plans to expand its retail footprint in India.”

The Future deal would have almost doubled Reliance's footprint. In a statement issued late Sunday, Amazon said it got all the relief it sought, without providing specifics.