Since the Modi government’s late evening decisions, many BJP-governed states and Odisha and Sikkim have cut the state tax on fuel 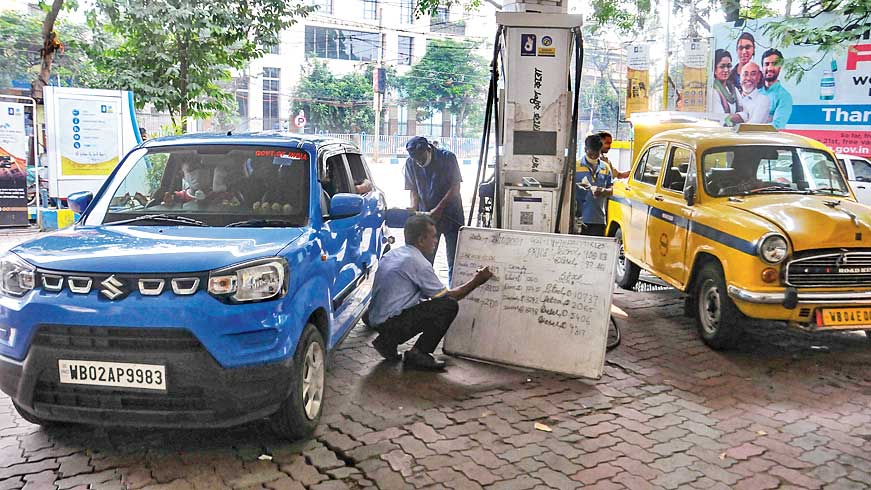 The excise duty cuts on diesel and petrol announced by the Narendra Modi-government will cost Rs 45,000 crore in lost revenue and widen the Centre’s fiscal deficit 0.3 percentage point to 6.4 per cent of the gross domestic product (GDP), Nomura said on Thursday.

On Wednesday, the Centre announced a much needed cut in excise duties on both petrol and diesel by Rs 5 per litre and Rs 10 per litre, respectively, to offset the impact of rising crude oil prices on consumers.

Since the Modi government’s late  evening decisions, many BJP-governed states and Odisha and Sikkim have cut the state tax on fuel.

According to a note from Nomura, the tax cuts could cost the government Rs one lakh crore (0.45 per cent of GDP) on an annual basis in terms of lost revenues.

For the remaining months of this fiscal, it would translate to a loss of Rs 45,000 crore.

“We revise our estimate of the fiscal deficit to 6.5 per cent of GDP (previously 6.2 per cent) versus the budget target of 6.8 per cent. The tax cuts should lower headline CPI inflation by 0.14 percentage point (pp) due to direct effects and up to 0.3pp, if indirect effects are included, although there are offsets from elevated input costs, reopening pressures and an ongoing energy crunch,” the brokerage observed.

It pointed out that the reduced fuel prices should be positive for consumption. However, Nomura has retained its GDP growth projection of 9.2 per cent for the current fiscal because of downside risks from supply-side bottlenecks on account of chip and energy shortages.

“The fuel tax cuts should reduce the burden on monetary policy, at the margin but, with inflationary pressures broadening amid the continued growth recovery, we expect policy normalisation to continue,’’ the note said.

It may be recalled that the monetary policy committee (MPC) has often called for a cut in taxes of the two fuels to lower inflation and anchor inflationary expectations.

Nomura, however, added that the Centre’s move partly reverses the hike in duties in 2020 by Rs 13 per litre for petrol and Rs 16 per litre on diesel, following a steep drop in oil prices, and comes on the heels of higher crude prices pushing retail prices to record highs.

According to the brokerage, there is an economic and political context to the announcement. It said that on the economic side, extremely high petrol and diesel prices exacerbate the broad-based supply-side increase in inflationary pressures.

The timing of the cut – on the eve of Diwali – also seems designed to maximise the growth boost from festive consumption.

Moreover, the government has the fiscal space to pay for these tax cuts as revenues in the current fiscal far exceeds the budgeted target.

Additionally, parsimonious spending has helped to limit fiscal deficit in the first half to 35 per cent of the budgeted target, compared with a 15 per cent overspend of budget in the same period of the previous fiscal.