VFLYX India has found noble civilian goals to use drone swarms in the areas of geo-mapping, agriculture , disaster management and aerial entertainment 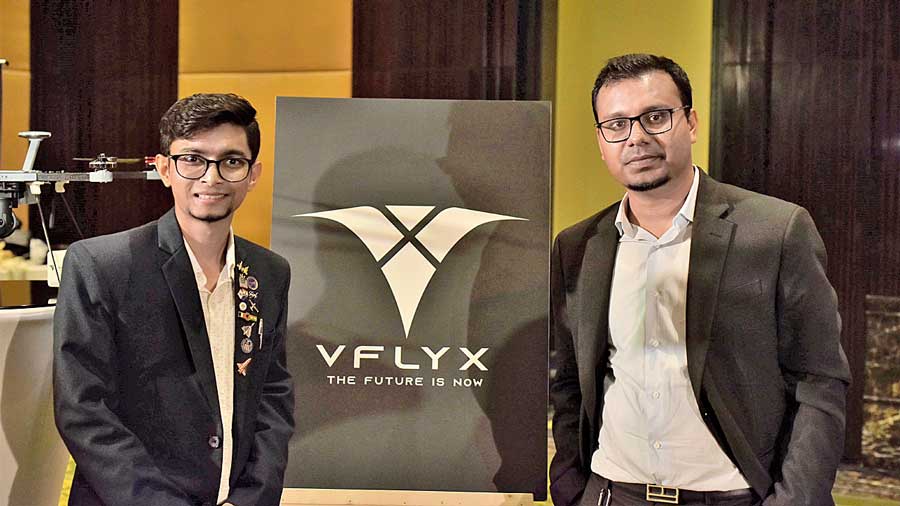 The concept of an army of drones that Mysterio used to trick Spider Man in the movie Spider Man: Far From Home, or the swarm of drones moving like birds in the popular video game Call of Duty: Advanced Warfare, isn't far from reality.

In the virtual world, the bad guys use drones to attain sinister objectives.

But a Bangalore-based startup — VFLYX India which carries out research and development on unmanned aerial vehicles in the country  — has found noble civilian goals to use drone swarms in the areas of geo-mapping, agriculture sector, disaster management and even aerial entertainment.

The Telegraph spoke with Rohit Dey chief technology officer and Vishal Saurav chief executive officer of VFLYX, who said changing regulations have unlocked myriad opportunities for the indigenous development of the sector in India.

Born in Calcutta, Dey (24) is a former Nasa scientist who has studied aerospace science from University of Central Florida, US and a B.Sc. CME (advanced computer electronics and theoretical mathematics) from Christ University Bangalore.

He said that the list of use cases for drones is growing by the day and VFLYX has a differentiated objective to customise a basic drone platform for different end-uses. Governments and enterprises are at present the main users for hi-tech drones.

“We have incorporated peer to peer communication in drones. That way drones in a swarm can talk with themselves. That’s where artificial intelligence and machine learning comes into picture. We can use this in case of natural disasters where personnel on ground can cover more area with a swarm of drones than individual units. Drones can also be used as aerial platforms to enable connectivity in disaster hit areas where power and network is affected,” said Dey.

“Besides mapping and surveillance, we can also incorporate crop health management systems that can help farmers detect and spray specific areas in the field thus saving a lot of money and time,” he said.

Saurav, in his early 30s, is an entrepreneur from Ranchi with a B.Tech in electrical and electronics engineering from Dayanand Sagar College, Bangalore.

He said VFLYX, a new business vertical of the ecommerce gadget startup Xboom Utilities, is having a scalable manufacturing base in Bangalore. “We wanted to start manufacturing drones earlier but due to stringent regulations, we couldn’t do it and were waiting for the right moment.”

This changed when the union ministry of civil aviation notified liberalised Drone Rules 2021. “The new regulation is giving a lot of emphasis on research and development without which we cannot build a manufacturing base,” Dey said.

The global drone market is dominated by the US and China. According to BIS Research, a global intelligence agency, the market will touch $28.47 billion this year, in which India’s share will be about 4.25 per cent. The new rules are expected to aid growth of the industry with several startups already looking at early-stage funding.

Excited at the growth prospects of the company, Dey signed off with a unique end use of drone swarms. “Firecrackers can cause a lot of pollution on Diwali. We can use drones instead for a lighting show in a completely eco-friendly way.”