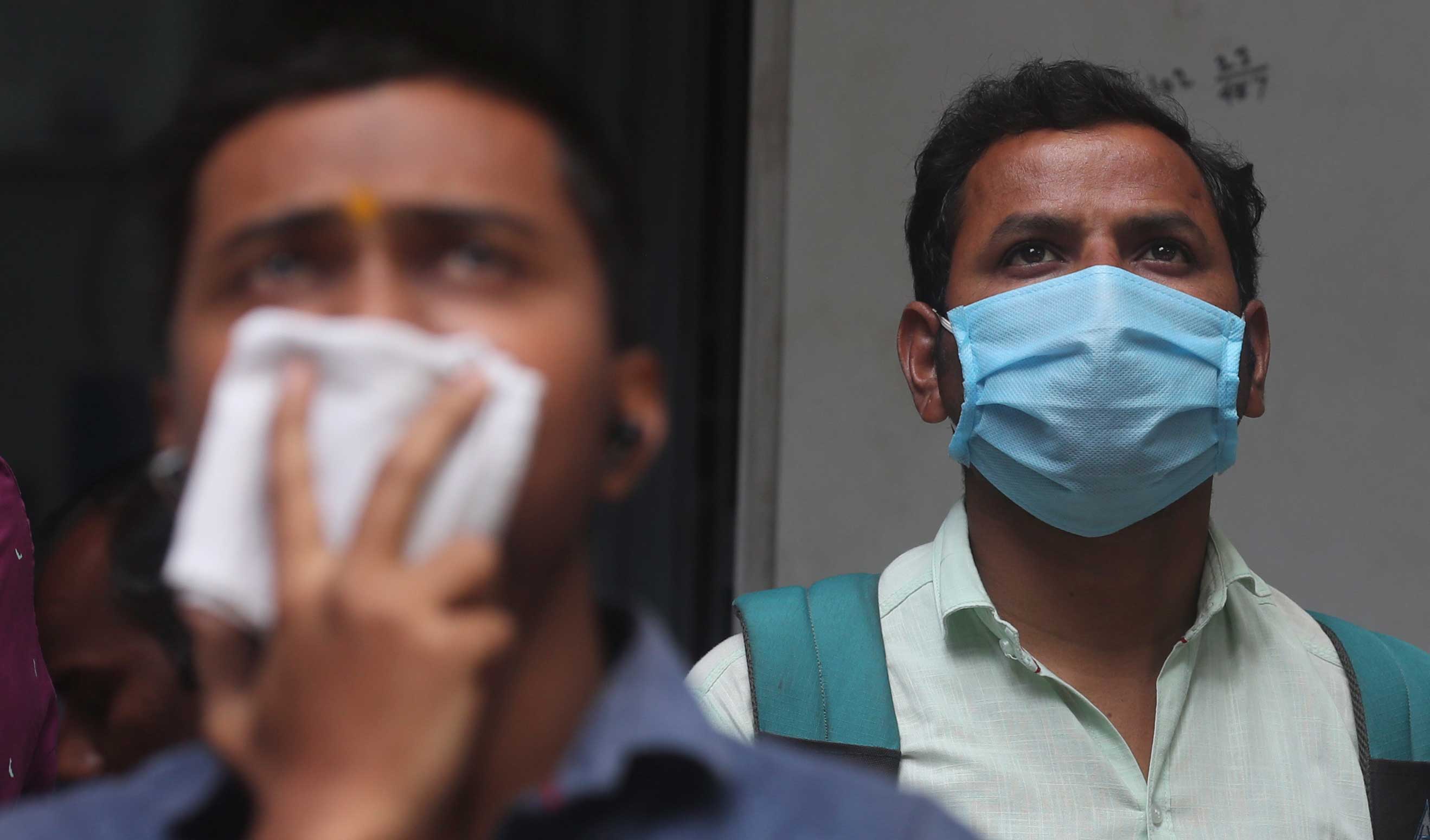 Citizens cover their faces as they watch the stock exchange index on a display screen outside the Bombay Stock Exchange building.
(AP)
Our Special Correspondent   |   Mumbai   |   Published 07.04.20, 08:09 PM

The stock markets staged a massive recovery on Tuesday with the bellwether BSE Sensex catapulting almost 2500 points to tot up a single-day record in absolute terms.

The almost 9 per cent surge over Friday’s close in a holiday-shortened week came on the back of a robust recovery of Wall Street on Monday, driven by concerted central bank action in advanced nations to bankroll an economic revival and dispel fears of a coronavirus-induced global recession.

Resuming the truncated week on a bullish note, stocks maintained their rally as investors used the buying opportunity presented by attractive valuations.

A further leg-up came from reports of the central government preparing fresh stimulus measures to cope with the economy post lockdown.

There was also optimism of higher inflows from foreign portfolio investors (FPIs) following a new regulatory regime that allows them to invest up to the sectoral limit against the current ceiling of 24 per cent.

However, experts said it was too early to say whether the current trend will be sustained as much depends on how the virus is contained across the globe.

This was the best session ever for both the indices in absolute terms. In percentage terms, it was the biggest in around 11 years.

All the Sensex stocks ended in the green with 14 of them gaining over 10 per cent. IndusInd Bank was the top gainer surging over 22 per cent, followed by Axis Bank, Mahindra and Mahindra, ICICI Bank, HUL, Maruti, HCL Tech and Nestle India.

The broader market also participated in the rally with BSE midcap and smallcap indices gaining up to 5.40 per cent even as all sectoral indices finished in the green led by BSE bankex, energy, auto, telecom, tech, FMCG and metal indices, which rose up to 10.70 per cent.

On the global market front, bourses in Shanghai, Hong Kong, Tokyo and Seoul rallied up to 2 per cent and benchmark exchanges in Europe were trading up to 4 per cent higher. Meanwhile, Brent crude futures, the global oil benchmark, rose 2.48 per cent to $33.87 per barrel on fresh hopes of an Opec-led meeting this week reaching an agreement to reduce oversupply.

“It is too early to call out the bottom. Deep corrections usually see bounces followed by waves of selling or correction. Importantly, the news turned positive after a long time and the breadth of markets improved significantly which is an encouraging change in itself,’’ Gaurav Dua of Sharekhan by BNP Paribas said.

The rupee on Tuesday surged 49 paise to close at 75.64 against the dollar, following a rally in the stock markets.

At the interbank foreign exchange, the rupee opened at 75.92 and gained further ground to touch the day’s high of 75.60. The rupee settled at 75.64, registering a rise of 49 paise over its previous close.

The Reserve Bank of India (RBI) has reduced the timing of market hours for call money market, government securities market, currency market from April 7 to April 17 (from 10 am to 2 pm) following the unprecedented situation that has emerged due to the spread of coronavirus.