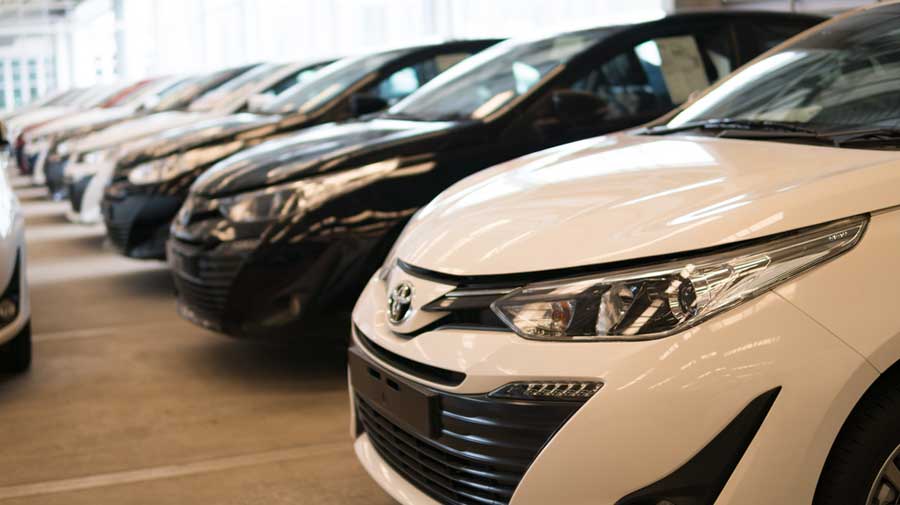 The brouhaha over GST rates burst into the open on Tuesday when Toyota Kirloskar vice-chairman Shekar Viswanathan told Bloomberg in an interview that the carmaker had decided not to expand operations in India because of the country’s high tax regime.
Shutterstock
R. Suryamurthy, Anasuya Basu   |   Calcutta, New Delhi   |   Published 18.09.20, 02:30 AM

Covid-19 — infamously characterised as an Act of God by finance minister Nirmala Sitharaman — has again come in as a handy excuse for a glowering response from the Narendra Modi government to silence the first rumblings of protest from automakers.

Some auto firms have had the temerity to suggest that the high goods and service tax (GST) rate has badly stalled recovery in the industry.

On Thursday, finance ministry sources sent out a stern message to the automakers: cut manufacturing costs and pare royalty payments to overseas parent firms instead of trying to pressure the government to cut GST rates.

The brouhaha over GST rates burst into the open on Tuesday when Toyota Kirloskar vice-chairman Shekar Viswanathan told Bloomberg in an interview that the carmaker had decided not to expand operations in India because of the country’s high tax regime.

“The message we are getting, after we have come here and invested money, is that we don’t want you,” Viswanathan said in that interview. In the absence of any reforms, “we won’t exit India, but we won’t scale up”.

Viswanathan’s statement resonated with other automakers and the rumblings of dissent over the high taxes started to begin, prompting Union heavy industries minister Prakash Javadekar to say in a tweet later that evening: “The news that Toyota Company will stop investing in India is incorrect. Vikram Kirloskar has clarified that Toyota will invest more than Rs 2,000 core in the next 12 months.”

Kirloskar, a minority partner in the car venture, stepped in to try and end the rumpus with his own soothing tweet: “Absolutely! We are investing over Rs 2,000 crore in electric components for the domestic customer and exports. We are committed to the future of India.”

The mild damage-control exercise didn’t apparently work as other automakers turned equally restive though they were too scared to issue public statements.

The government has now decided to come out with a more aggressive response to quell criticism over its tax regime at a time when it is trying to woo foreign investors to set up shop in India.

Driving etiquette says you must not dazzle a flustered car driver in a sudden face-off with a luminous high-beam response — but the government has chosen to do exactly that.

“If the regulatory environment was not conducive, it would be hard to imagine new players investing heavily in vehicle-manufacturing facilities like Jeep, Kia Motors and MG Motor, to name a few. Those companies which can feel the pulse of the Indian consumer and deliver accordingly are ruling the roost,” a source said.

The suggestion to cut royalty payout to overseas parents is unusually aggressive since the royalty was the real reason the Japanese and South Korean automakers invested in India in the first place. Most pay royalties between 3 and 5 per cent. In the case of small global automakers like Suzuki Motors, this is a critical source of revenue.

Automakers have not responded to the government’s suggestion to cut royalties but maintain that it is becoming hard to do business in India because of the high tax rates.

Shashank Srivastava, executive director of Maruti Suzuki India, told The Telegraph: “India’s GDP per capita is low by international standards and because of our demographics profile we have a large number of first-time buyers who buy more value cars. These two factors make for a high elasticity of demand as regards the cost of acquisition of cars. The high sensitivity of buyers to the cost of acquisition makes it imperative to keep the costs low if the industry has to tap the big upside potential that comes from the current low car penetration in our country.”

He said automakers try to optimise costs relating to components, labour, productivity, logistics and retailing. But the costs outside their control are regulatory and statutory costs like road taxes, registration taxes, insurance costs, GST, cess, etc.

Therefore, the industry often appeals for the reduction of the costs of acquisition arising from these elements. “The government obviously has to take appropriate decisions on these based on the overall economy,” Srivastava said.

But an increasingly truculent government is not prepared to listen to any form of criticism and, instead, insists that automobile taxes in India are among the lowest in the world.

A finance ministry source said: “The GST rates on automobiles are less than what value-added tax (VAT) and excise duty rates used to be in pre-GST times. The tax policy on automobiles has been quite consistent for the last three decades and we have incentivised domestic manufacturing by providing reasonable protection from imports. Industry has, on its part, also delivered on its side of the bargain. It has contributed by making large investments and increasing employment.

“This sudden dissent in some quarters on tax rates on automobiles is surprising. These companies should cut down their costs of manufacturing by cutting down the royalty payments to their parent companies abroad instead of asking the government to reduce GST.”

The source suggested the response was coming from frustrated automakers who were unable to stand the heat of competition.

The official said that Japan currently imposed three types of taxes on automobiles: once on purchase, then an annual automobile tax based on engine size and, finally, a weight tax at inspections required once every two years. Over and above this, there is GST at the highest applicable rate, the official said.

Sources also cited the example of the EU where the base rate for VAT/GST on automobiles ranges from 20 per cent to 25 per cent, with a string of other taxes varying with jurisdiction.

“The UK charges vehicle excise duties that vary with car emission norms and has 14 rate slabs varying from zero to £2,175 a year with a surcharge of £325 in the first year and £150 for expensive vehicles,” a source said.

“Besides, there are road usage charges. Further, high parking charges are common across the globe. Most of the countries provide certain concessions to electric vehicles. Given this, it would be unfair to claim that the GST rates in India are astounding or a demand dampener.”

Ravi Bhatia, president and director, JATO Dynamics, an automotive research firm, said: “It is not wrong for industry to seek a stable policy framework and globally comparable taxation regime. ‘Make in India’ can happen only when the government puts money where its mouth is.”

He added: “We have idle capacity and that hurts profitability in a very big way. This sector also has employment generation potential which is not being utilised…. For a country which can economically benefit from improving mobility, the auto sector wants to be seen as a facilitator of economic growth and not a burden or a sin good.”

It is hard to say why the dissent has erupted now after months of poor automobile sales.

One view is that the carmakers want to head off the possibility of the GST Council tinkering with rates again — especially raising the compensation cess on high-end cars — at a time when the Centre is locked with the states in a battle over unpaid dues and inadequate compensation payouts to make up for the shortfall.

The issue is likely to come to a head on October 5 when the GST Council is to meet with the states, which are being asked to vote on two stark and disagreeable options: either borrow a sum of Rs 97,000 crore from a special window to be created by the Reserve Bank of India to meet a small part of the expected Rs 3 lakh crore shortfall in GST collections this year, or raise the entire uncovered sum of Rs 2.35 lakh crore in the form of debt.

The GST compensation cess is expected to raise a paltry Rs 65,000 crore this year, creating a gaping hole in the states’ finances.

The Modi government has broken a circle of trust after it disclaimed its constitutional obligation to compensate the states for any annual shortfall in tax collections this year.

Automakers fear that the compensation cess -- which is levied on cigarettes, pan masala, aerated drinks and cars that are more than 4 metres long — might be raised to meet a part of the dues, which would wreck their operations.

The GST Council was supposed to meet on Saturday but will now meet after the end of the current session of Parliament.