The SBI chairman said there were many suggestions on infrastructure financing and tax benefits for MSMEs, exporters 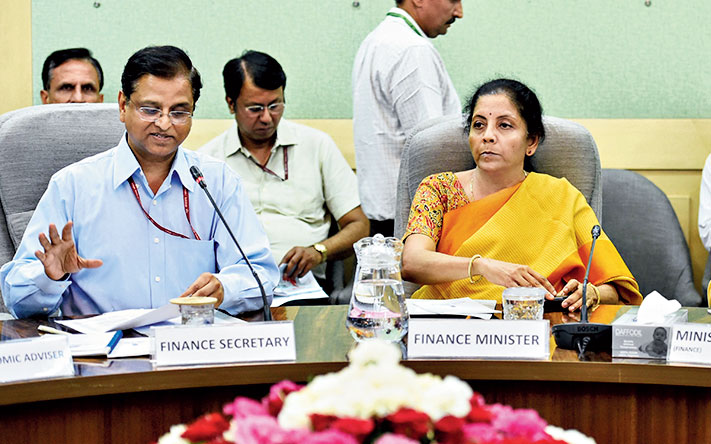 The financial sector on Thursday sought a dedicated liquidity window for NBFCs that can be used as a source of emergency funding from the government.

In their pre-budget meeting with finance minister Nirmala Sitharaman, representatives from the sector also demanded a review of the interest rates on small savings schemes as well as the provisions made by banks for their non-performing assets.

They sought the extension of tax incentives to retail investors in corporate bonds as well as additional tax sops in term insurance plans.

The delegation proposed a committee to review the provisions for bad loans.

Other suggestions include a debt exchange traded fund, domestic capability building in audit and credit rating and the rationalisation of various taxes such as the security transaction tax (STT) in the capital market.

”We discussed how to enhance the corporate bond market. At present retail investors do so through mutual funds. If some tax benefits can be extended to retail investors also, just like it has been extended to mutual funds, they and the corporate bond market would benefit,” Rakesh Sharma, IDBI Bank CEO and MD, told reporters here.

He said liquidity and solvency issues of NBFCs needed to be handled separately and on a case-by-case basis.

”There are issues regarding solvency and liquidity. In case of only liquidity issues, some market window could be opened to make funds available on a case-by-case basis. Solvency related issues have to be handled separately,” Sharma added.

SBI chairman Rajnish Kumar said there were many suggestions on infrastructure financing and tax benefits for MSMEs and exporters. On being asked about the SBI’s capital requirements, Kumar said the bank does not need capital from the government.

Other suggestions include a separate bond exchange and allowing banks to invest in InvITs and make corporate tax progressive to incentivise the MSME sector.

Traders body CAIT on Thursday urged the government to lower the GST rates on various products including auto parts and aluminium utensils and the waiving off charges on digital payments.

Submitting a white paper on the GST to Sitharaman, the Confederation of All India Traders (CAIT), also suggested reducing the rates for items such as hardware, mobile covers and ice cream.