Airbus in talks with Tatas, Indian carriers for A350XWB aircraft 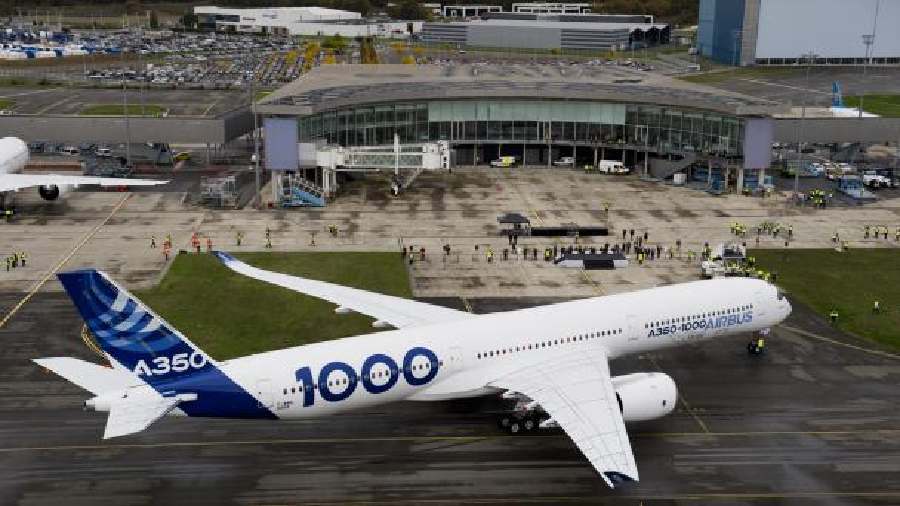 European aircraft manufacturer Airbus is in talks with Tata Group and Indian carriers for a deal regarding the procurement of its wide-bodied A350XWB planes.
aircraft.airbus.com
Our Bureau, PTI   |   New Delhi   |   Published 21.03.22, 01:59 PM

European aircraft manufacturer Airbus is in talks with Tata Group and Indian carriers for a deal regarding the procurement of its wide-bodied A350XWB planes, President and MD of Airbus India & South Asia, Remi Maillard said on Monday.

Wide-bodied planes like A350XWB have larger fuel tanks that allow them to travel longer distances as compared to narrow-bodied aircraft like A320NEO.

A350XWB aircraft can travel above 8,000 nautical miles, with flying time of approximately 18 hours in one flight.

When asked if Airbus is in talks with Tata and Indian carriers for the A350XWB aircraft deal, Maillard said, We are obviously in talks with all airlines. The new owner of Air India Tatas are existing customers of Airbus.

Tatas have Vistara and AirAsia India with them, as we know. We have developed long standing, trustful and respected relationship with the Tata Group, he stated at a press conference here.

The Centre had sold Air India and Air India Express to the Tata Group in September last year.

Maillard said Tatas are Airbus's partner in the defence business too.

We are industrialising and manufacturing together our C-295 military transport aircraft for the Indian Air Force (IAF), he noted.

Of course, we will be privileged to continue supporting the ambition of the Tata Group in the aviation sector across all the complete spectrum, he added.

The wide-bodied aircraft fleet in India has remained stagnant for the last 20 years, he said.

The single-aisle aircraft fleet has multiplied by a factor of six in the same time period, he noted.

We predict a 6.2 per cent yearly average growth for the air traffic out of India. The world average is at 3.9 per cent, Maillard noted.

Airbus is quite bullish on the long-haul international market out of India, he said.

We believe the kind of revolution we have witnessed in the domestic traffic in the last 20 years will now happen in the long haul market, he noted.

We believe that the new generation aircraft, the A350, will be the trigger for this revolution in the international long haul market, the MD added.