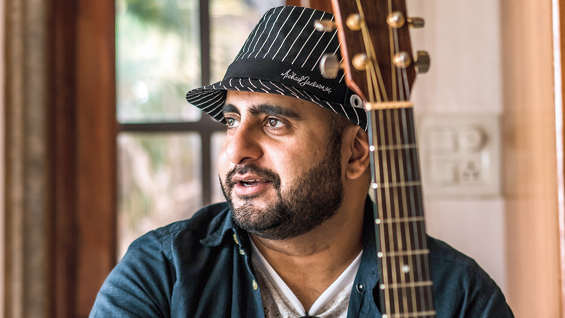 Singer-songwriter, composer, vocal coach and audio engineer, Rohan Solomon is a man who wears many hats. The indie artiste from New Delhi launched his new single Without A Trace last month which showcases an “unfiltered side” to the artiste.

Rohan’s music career started at a young age as the vocalist of Delhi-based alternate rock outfit Cyanide. After moving to New York a few years ago he met his new bandmates and launched his new rock band — By Chance — and also got to play the role of assistant engineer on the Grammy Award-winning track Bubblin by Anderson .Paak. A chat with Solomon.

What’s the story behind Without A Trace?

The song is pretty much about the phases of self-doubt. We all go through it at some point but are pretty reluctant to confide in other people about it. It’s not really a subject many songwriters often write about. I guess the main message would be that it’s perfectly normal to feel those feelings and it’s healthy to talk about it... to a friend, a family member or an audience in my case (laughs). The song came about during a co-writing session with my friend Suhasini Mehta on Skype. That chat session between friends, got me thinking and I just started to really dig deep and open up on the subject; the insecurities we face. Which led to the crux of the song (the chorus: Now I stand here lost in space, watching my life leave no trace). The chorus just set the tone for the song and everything else started to fall in place.

Sonically, how would you describe the song?

It’s definitely a bold choice for a single, as it’s pretty bare-bones, meaning super stripped-down. There’s just me with my voice and a guitar baring my soul for the whole world to see. There are no drums or bass in the song, which sometimes can be used as a crutch or a mask, so to speak. Without all of that, it’s almost like you’re naked and have nowhere to hide. That being said, it made me question myself if this is the right one to put out as a single. But the absence of a rhythm section actually ended up accentuating the story, which, at the end of the day, is what songwriting is all about. Sonically, it’s a power ballad which is focussed on vocals and an acoustic guitar telling a story and is engulfed by a symphony orchestra. This one is certainly different from my previous releases as it doesn’t have a “full band” feel to it.

We were told that the song showcases an “unfiltered side” of you. Could you explain this “unfiltered side”?
Yes, it does. I have never really written or sung about my own insecurities before. I’ve always been a very private person. But I really was digging for gold with this one and wanted to get to the crux of my personality. I used to be shy and reluctant to talk about deep personal stuff like this. I would usually write about so-called ‘on the table’ subjects, from the point of observation of the world around me, not really my private, inner world. But when I wrote Without A Trace... each time I sang it... it’s therapeutic. Now that I’ve released it and shared it with the rest of the world, I think it’s even more therapeutic and cathartic than ever before.

The 7th House Strings also had a role to play in this song.

I had worked with them before in New York City on a track I was producing for another artiste and they just did a really great job. When I started producing Without A Trace, as I got done with the guitars and vocals, the void in the song was just screaming out for a strings section. I decided to give them a call and asked them to work on a section of the track with me and they were very happy to do it. Regarding their music, I like the way they sound together. They’re really good at understanding the story of the song and getting the same emotions out through their playing.

What can your fans expect from you in the near future?

Oh yes. I have been writing new music pretty actively during the self-quarantine period and I am doing so even now. This quarantine period has actually been a period of great self-reflection and has been super productive for me. You can definitely expect more music from me to pop up soon. There is some good material that is stemming from these writing sessions that I’ve been very dedicatedly going about. I write regularly regardless of the outcome.