Another Nizamuddin brews in ashram: Plea

Dad to SC: Rescue my daughter 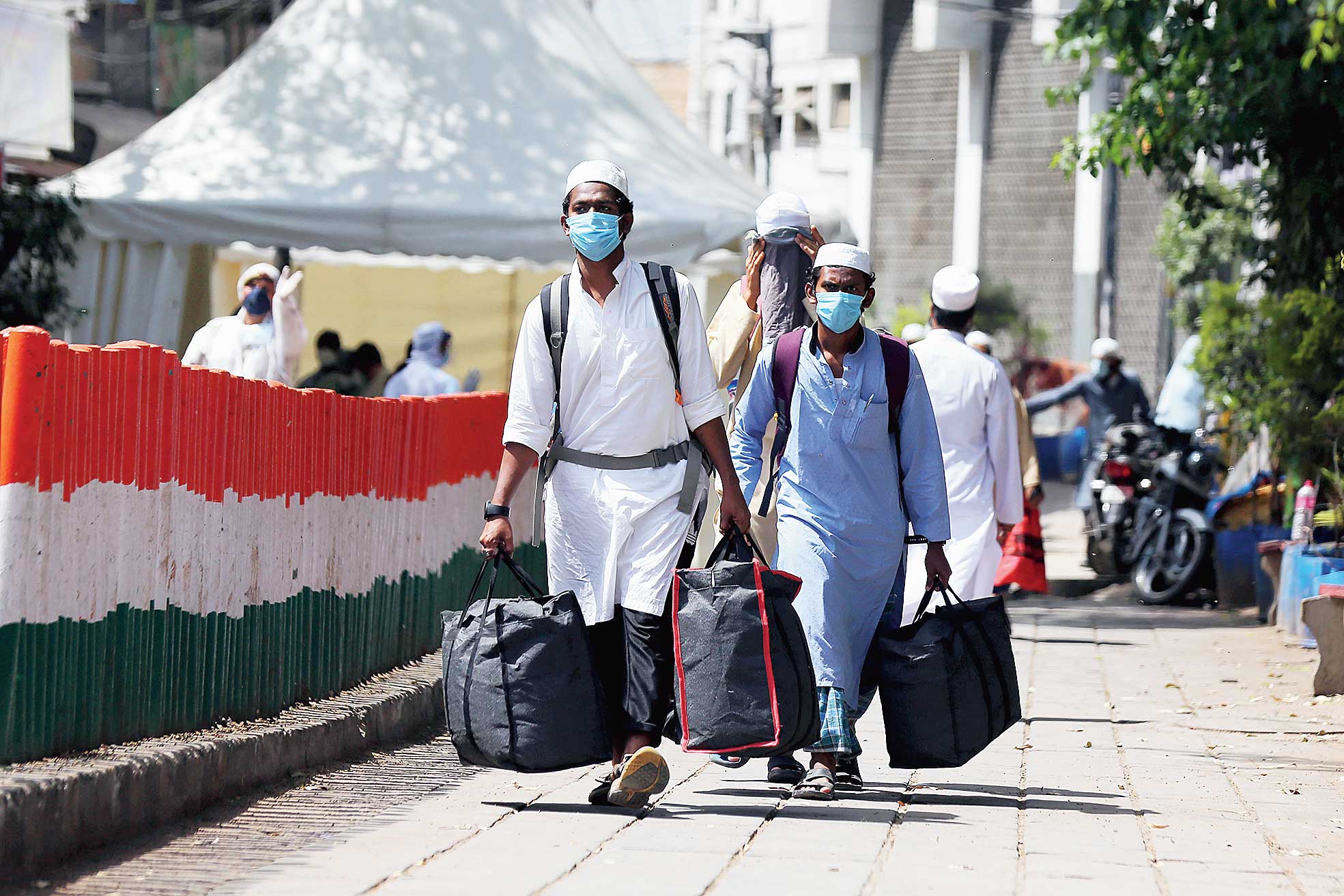 People who came for a religious gathering at Nizamuddin Mosque in New Delhi being taken to the LNJP hospital for Covid-19 test after several of them showed symptoms of the coronavirus.
File picture
R. Balaji   |   New Delhi   |   Published 02.04.20, 11:10 PM

Dumpala Ramreddy, 67, says if the authorities don’t immediately rescue his daughter and 169 other young women devotees he alleges are forcibly confined in dingy rooms at a “fake baba’s” ashram in Delhi, there could be a coronavirus emergency.

Ramreddy, who has been unsuccessfully knocking the Supreme Court’s doors for about a week over the matter, compares the situation to last month’s religious congregation in Nizamuddin that is said to have spread the virus.

The allegation of the women being illegally confined and sexually exploited at the Adhyatmika Vidyalaya (Spiritual School) at Rohini, run by the now absconding “baba” Veerendar Dev Dixit, has been before Delhi High Court since at least 2017.

The panel report said the women were caged in virtual rat holes behind a series of metal doors and grilles, appeared drugged and lived without sunlight or privacy. Many of them were ill but received no treatment.

What the CBI said in its report after the raid remains unknown. The high court did not order an immediate rescue or relocation to shelter homes, as the women’s petitioning parents including Ramreddy had pleaded. It decided to wait till the CBI furnished its final report after investigating all of Dixit’s ashrams across the country.

That report is still awaited, and it’s unclear how far the countrywide probe has progressed and when it might be completed.

When the Covid-19 crisis broke out and the Nizamuddin congregation attracted outrage — although several other religious gatherings elsewhere too had violated the social-distancing protocol — Ramreddy decided to try his luck in the apex court.

“If my daughter Santosh Rupa and the other women captive in Rohini — and the about dozen other ashrams across north India — are not freed immediately, it could become another Nizamuddin crisis where hundreds got infected after living in close contact,” the Hyderabad resident told The Telegraph.

But he says his repeated attempts to secure urgent listing for his March 27 petition, which seeks immediate rescue for the women, have come up against the apex court’s lockdown protocol.

The court registry has told him that only urgent cases will be heard — through videoconferencing — and that these cases must be filed through the advocates-on-record.

Although the Supreme Court allows non-advocates to file petitions under the “petitioner in person” category, this provision has been suspended temporarily as a social-distancing measure.

Ramreddy says he and his wife survive on his meagre annual pension of about Rs 2 lakh — he cannot afford the fees charged by the advocates-on-record.

Supreme Court sources confirmed that individual petitioners are not being allowed to directly approach the court. But they added that it’s for the Chief Justice of India to take a call on such individual matters.

Ramreddy says his daughter, who was pursuing a post-doctoral degree from Iowa State University in the US, had admitted herself to the ashram in July 2015.

In 2017, a “joint committee” formed by Delhi High Court had furnished its report on the women’s horrific lives in the ashram.

A court order of December 20, 2017, quoted from the report to say: “Some of the women inmates are in ailing condition and are not being given medical attention…. She (a committee member) submits that the inmates appear to be under tremendous pressure.

“Ms Nandita Rao, advocate, who is a member of the team appointed by us, submits that over 100 girls were housed in animal-like conditions with no privacy. She submits that during the inspection where the inmates were housed, the passage was so narrow and of such low height that the team had to bend double to go through the same. Metal doors have been installed at short intervals….”

“Ms Rao expressed grave apprehension about the health of the inmates and submits that several of the inmates appear to be under the influence of some kind of drugs or narcotic substances. The inmates are completely confined and are not permitted any access or contact with their relatives or friends. They are kept in close confinement in the dark spaces with no sunlight with metal grills and nowhere to exit therefrom. She submits that even the sleeping area is monitored and the girls have no privacy at any time.”

Ramreddy has mentioned these findings in his apex court petition.

Seeking urgent rescue for the women, he has cited how the Supreme Court had issued orders granting parole or interim bail to several prisoners as a social-distancing measure in jails.

He has also cited the evacuation of over 2,300 people from a six-storey mosque near Nizamuddin, of whom over 530 are said to have developed Covid-19 symptoms.