The Ark that Finkel built

A British Museum curator built a version of Noah's Ark, based on instructions inscribed on a Babylonian clay tablet, in Kerala. Shrabani Basu meets him 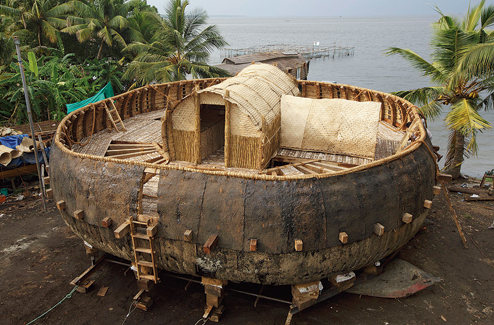 Take a 4,000-year-old recipe to build a boat. Not just any boat, of course, but the oldest boat of all: Noah's Ark. Build it secretly in Kerala. Float the boat on the lake. Mission achieved.

This was what a British Museum curator achieved. His verdict: 'It's a miracle.'

It all began when a 'rather gruff, non-communicative man' called Douglas Simmonds walked into the British Museum in 1985 and placed a collection of artefacts in front of the curator of the Middle East department, Irving Finkel.

Finkel's trained eyes fell on a particular Babylonian clay tablet. No larger than a cellphone handset, it was inscribed with a cuneiform script — the first script in human history — and was instantly recognised by him as the story of the Babylonian flood.

He knew he would need many hours to decipher the whole script. Simmonds, however, was not prepared to leave the tablet — which his father had brought back to England after wartime service in West Asia — at the museum.

But 24 years later, Simmonds was back, drawn by an exhibition at the British Museum on Babylon. Finkel spotted him and asked him about the flood tablet. This time Simmonds agreed to leave it with Finkel. Soon it was resting on the curator's desk. Armed with a lamp, lens and freshly-sharpened pencils, Finkel, who described himself as a 'flood detective', began his work.

The discovery — described in his 2014 book, The Ark Before Noah, Decoding the Story of the Flood — proved that there was an older version of the story of Noah's Ark, even before the one from the Book of Genesis. It emanated from Babylon nearly 4,000 years ago. Finkel discovered that the 60 lines inscribed on the tablet contained detailed instructions for making the Ark. And in it, the Ark was not oblong, but round. In fact, it was a coracle.

'It was the most amazing thing,' Finkel says. 'It all added up. In Mesopotamia, they used round coracles. These would not sink; they just needed to float. I found that the measurements given on the tablet for the ark were real coracle measurements. God had to make sure that they got it right!'

The story of Noah's Ark is well known in Christian, Muslim and Jewish religious texts. God, the story goes, was going to destroy the world, but dictated to Noah that he should build an ark and take his family and all the animals to safety. That an older story existed in ancient Babylon has been known since the 1870s.

The deciphering of the script led to an unusual request. A film company wanted to re-build the Ark using Finkel's de-coded tablet as the manual. They knew three men based in Oman, who specialised in building replicas of ancient boats. The boat, however, would be built in Kerala.

'For obvious reasons, the boat could not be made in present-day Iraq, so they chose Kerala,' Finkel says. 'It had to be built with all the ingredients the Babylonians would have used — palm trees, pith, reeds, bitumen. Kerala had everything they needed, though the bitumen was not of such good quality.'

Over four months the film crew, architects and builders were in Alleppey. 'There was a boatyard in a quiet location on the lake. It was surrounded by leafy jungle growth. The project had to be kept dead secret. Otherwise hundreds of journalists would come around asking questions,' adds Finkel, who with his long white hair and beard looks almost Biblical himself.

Everything had to be done by hand. The workers could not use glue or nails. Twisted palm fibre was used to secure the joints.

'They were fantastic workers,' Finkel says. 'Many of them were Muslim, and they knew about the Safina Nuh (Noah's Ark in the Quran). The day they launched the boat and towed it out to the middle of the lake, it was amazing. It was virtually dusk, and the lake at that time was choc-a-bloc with passenger boats, tourists drinking their gin and tonics... and suddenly they saw this huge coracle floating out, and they couldn't believe it. It was very theatrical.'

The original size of the Ark — as written on the tablet — would have been the size of half a football pitch, Finkel says. The reconstructed vessel, set over two levels, was bigger than one-fifth of the original. It even featured Noah's house, which is supposed to be built on the boat. In the Babylonian version, it was a small Mesopotamian hut built with reeds.

'The weight of the finished boat was about 35 tonnes. It could easily pack a lot of well-behaved animals,' Finkel laughs. 'When I reached Kerala, they had already finished the boat. It came floating out of the water straight from the Babylonian age. It was amazing.'

So was there an actual flood of biblical proportions in Babylon? Finkel believes that there was a real fear of flooding and stories of death and destruction that arose from these anxieties. 'The myth of the flood story, to build the boat, is an antidote to this very fear.'

The reconstructed Ark, which was launched this summer, is waiting for its new tenants. According to Finkel, Sheikh Nasser of Kuwait, who has a house in Kerala, is interested in it. 'He will probably dock it in his private backwater and throw candle-lit parties,' Finkel says.

Sadly, the man who handed Finkel the tablet died in March 2011. Simmonds did not get to see the Ark.