The Haryana government is excavating a channel and developing a creek, part of an effort at reviving the Saraswati river mentioned in the Rig Veda. But the project has triggered controversy, writes T.V. Jayan 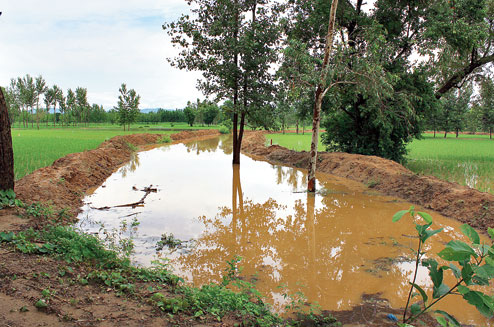 The canal - 10 or 12 kilometres long - snakes its way through lush green fields. Seasonal rains have brought work to a temporary halt. But when the labourers get back to it after the monsoon season, a river called Saraswati will take shape.

Or so they say.

In Haryana, where the digging is taking place, there is a sense of excitement. In other circles, where the river - its existence, its location and the campaign for its revival - has been hotly debated for years, there is scepticism.

For the proponents of the river, the canal is a part of the Saraswati river mentioned in the Rig Veda and other Hindu scriptures. And for the Bharatiya Janata Party (BJP), in power in Haryana and at the Centre, the time has come to resurrect it.

In April, the Haryana government sanctioned Rs 50 crore for the project. The government has promised to pump in more money as the work progresses. The excavation - at present in Bhita village in Haryana's Bilaspur block - is being carried out under the Mahatma Gandhi National Rural Employment Guarantee Scheme.

The project entails the excavation of an identified paleo channel some 50 kilometres long and developing a creek so that water can flow smoothly through it.

"Over the years, it can become a river of reasonable size," says octogenarian Darshan Lal Jain, an industrialist and president of the Saraswati Nadi Shodh Sansthan, a body that has been steadfastly campaigning for the revival of the lost river. Jain was recently appointed to a multi-disciplinary committee constituted by the Union ministry of culture for the Saraswati Heritage Project.

The river revival has for long been a favourite project of BJP governments. When the Atal Behari Vajpayee-led National Democratic Alliance came to power, the place from where the stream supposedly originates - Adi Badri, on the foothills of the Shivalik - was secured as the Saraswati Nadi Udgam Sthal and a pond was constructed nearby to collect water.

For the pro-Saraswati lobby, the revived stream will have many benefits. The administration says it will attract tourists - religious as well as recreational - helping the state to make money. To top it, it will also help the farmers of the state, it says.

"To me the project is much more than religious," says Gagandeep Singh, a 2002 batch officer of the Haryana civil services, who, as district development and panchayat officer in Haryana's Yamuna Nagar district, is overseeing the project to revive the river.

"Every year farmers in the district lose crop over a vast stretch of cultivated area because of floods in the Somb. If we can divert the waters, as much 10,000 acres of land can be reclaimed," he says.

Singh believes the project will also help recharge groundwater in many parts of the district, where levels have plummeted perilously because of overexploitation.

But will it? Or will the project be yet another white elephant?

Critics of the project believe that it is a "fake Saraswati" river which the state and the central government seek to revive on the basis of evidence not scientifically validated.

They also hold that the revival of the river is just an attempt to "equate" the Harappan civilisation, which is believed to have predated the Vedic period, with the Vedic civilisation. It would second the belief of Hindutva ideologists that Aryans were from India.

"Equating the civilisations will help in the propagation of the belief that Indo-Europeans didn't come to India in the 2nd millennium BC, as is widely believed, but went out to other geographical regions from here," says a scientist at a national institute, who doesn't want to be named.

Mayank Vahia, who is at the Tata Institute of Fundamental Research, calls for more research into the Indus and Saraswati Valley civilisations. "More rigorous studies will settle many of these controversies scientifically," he says.

Of course, the controversy over whether the Saraswati existed - or is mythical - continues. Old topographical records mention a river called Saraswati which merges with the Ghaggar, a seasonal river that flows in the plains of Haryana and Punjab, and which is known as Hakra in Pakistan.

Even among scientists, there is a rift. Geologist Khadg Singh Valdiya, considered an authority on the Himalayas and an emeritus professor at the Bangalore-based Jawaharlal Nehru Centre for Advanced Scientific Research, thinks that there is "enough geological and sedimentary evidence to show that the Saraswati (the Ghaggar) was a big river" in the past.

"And there is proof to establish its glacial origins too," Valdiya says.

Archaeologists have discovered ancient settlements along the banks of the Ghaggar and nearby places. "More than a thousand settlements excavated in the recent past are from the Ghaggar river basin," says Ravindra Singh Bisht, former joint director-general of the Archaeological Survey of India.

But beyond this argument, there are other issues as well. There is, for one, concern over diverting river waters to revive a channel. Under fire is a plan proposed by the Oil and Natural Gas Corporation Limited under its corporate social responsibility programme. The public sector giant plans to explore the possibility of drilling the so-called underground channels of the lost river and drawing water.

"If the authorities are planning to use borewells to supply water to the dry bed, it would be the height of absurdity and guaranteed failure," warns Michel Danino, visiting professor at the Indian Institute of Technology, Gandhinagar, and author of the book The Lost River: On the trail of Sarasvati.

Reviving a river, he adds, is desirable, especially because rivers have turned seasonal or disappeared in the last few decades. "But the question is whether it can realistically be done in the case of the Saraswati," says Danino, a member of the Indian Council of Historical Research.

The only way to revive the Saraswati in its upper basin is through the massive reforestation of the Shivalik Hills, which will help retain rainwater, and large-scale rainwater harvesting in the plains through thousands of ponds and small checkdams. Short of this, it will be a waste of public funds, he says.

What about the ecological implications of diverting river waters? In this case, says Himanshu Thakkar, co-ordinator of the South Asia Network of Dams, Rivers and People, there may not be an ecological imbalance as the rivers belong to the same basin.

"But the real question is: why do we need to do it, even if it is for religious purposes? Rivers are worshipped all over India. And there is a crying need for conserving and protecting most of them," Thakkar says. "Instead of focusing attention and resources on them, efforts are on to revive a river which disappeared thousands of years ago for unknown hydrogeological reasons."

But whether the river - if and when revived - would be the lost Saraswati is under dispute, too. "How is it different from a canal which is being built for irrigation? By naming it Saraswati, people with vested interests are actually attempting to befool the people," says a scientist.