When it comes to getting married, young Indians are opting for the works, cost be damned, as a snap poll by The Telegraph demonstrates 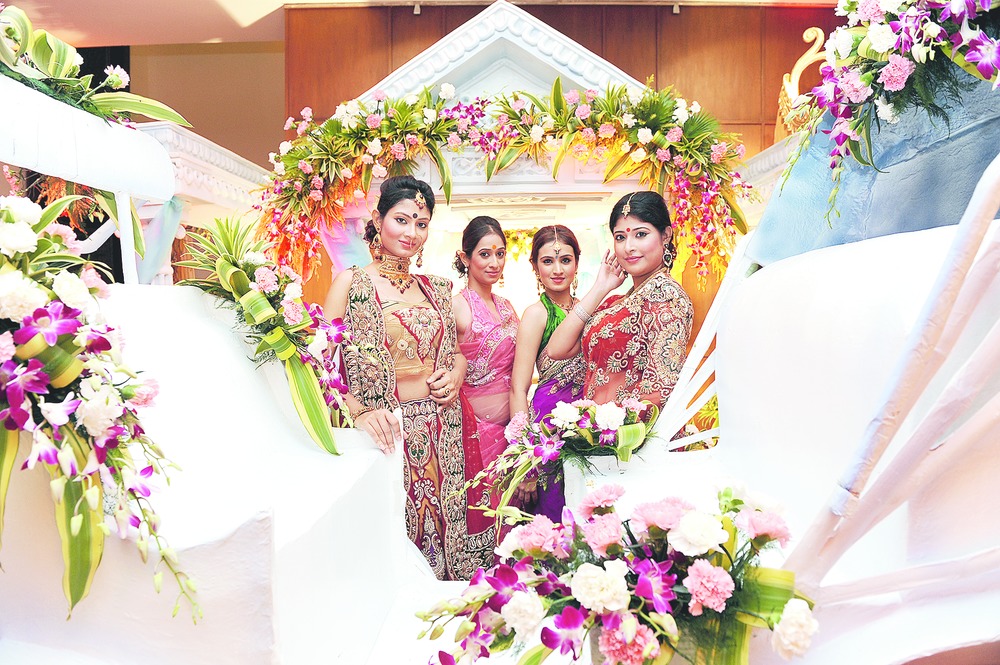 Monisha Kanwar, 21, has a dream. She wants a wedding that people will remember. She sees herself wrapped in jewellery, wearing a rich lehenga, being carried to the wedding venue - a desert palace - in a palanquin. And the PR professional won't mind spending Rs 1 crore on it.

"I want the works," she says. "It is not a 'status' thing. I want to do this because weddings are a once-in-a-lifetime affair."

Young Indians are going in for big fat weddings like never before. Earlier, their parents were the ones who wanted lavish dos for them; now the young are planning them out, expenses no bar.

More often than not, it is the about-to-be married couple that walks into the office of Gunjan Bansal, founder, L'amore Weddings, with a long list of requests. In many cases, she adds, the parents' role is limited to signing cheques and drawing up guest lists. "Young couples are getting more and more involved in their weddings," agrees Shreya Dutta of Krafted Knots-Weddings and Celebrations, Bangalore.

A snap poll of 74 youngsters, conducted by The Telegraph, demonstrates that about 61 per cent want a big wedding and almost 90 per cent would like it to be held somewhere exotic.

Such weddings can cost anything between several lakhs of rupees and several crores, the planners point out. But for a large section of young Indians, cost is not a factor. "The spending capacity of Indian society has spiralled drastically," says Rumaiza Fathima, co-founder of The Dream Theme, Chennai.

Budding corporate lawyer Sakshi Pasricha, 23, has decided that she will marry only when she has Rs 60 lakh set aside for her wedding over the next five years. "I am working very hard with the single aim of having enough money to have a dream wedding," she elaborates.

There was a time, not so long ago, when over-the-top weddings were frowned upon. But that's passé; today extravagant affairs are to be celebrated. Young couples want destination weddings (Goa, Kerala, Pondicherry and Rajasthan in the country; Thailand, Indonesia, Mauritius, Greece, Spain, Italy and elsewhere in the world), several days of celebrations before the event, performances by their favourite singers, special LED effects and so on.

People are still talking about the wedding of Rishi Jain and Surabhi Agrawal, who come from affluent business families in Calcutta. Their wedding was an 11-day affair - three receptions, over 1,000 guests, 45-course meals by chefs who had been flown in from Thailand, and finally a wedding at a palace hotel in Jaipur.

"For 11 days I was made to feel like a princess," says Agrawal.

Social scientists believe that a lavish wedding is merely a sign of contemporary times. "Youths now quickly respond to consumerism and a lavish lifestyle, an assertion of the successful self in an era of globalisation," points out Ruchira Goswami, who teaches at the National University of Juridical Sciences in Calcutta. "So a wedding is more like a demonstrative event, a marker of success and social status."

There are several reasons the young want a big affair. One, they stress, it is a "lifetime" event. "I shouldn't look back after many years and have any regrets," Anand says.

Another important factor is that their peers - friends and relatives - have had gala weddings. "I can't be left behind," argues Vaishnavi Sharma, 22. "I work hard and I party hard. And I want my wedding to be one, big party too," the PR professional states.

Most parents are happy to go along with their children. "These days, children have access to the best of things - be it brands, gadgets or weddings," says Sakshi Vakhera, mother of a 19-year-old. "My son is already looking forward to upgrading to the iPhone 6S. So if he wants a fancy destination wedding, we will let him go ahead."

The buzz that the social media creates over celebrity weddings is another factor, Fathima holds. "Youngsters are influenced by the social media buzz and the fact that when a celebrity gets married, everything goes viral even before the guests leave the venue."

The cyber world, for instance, is still revelling over the recent wedding of cricketer Dinesh Karthik with squash player Dipika Pallikal (picture above).

"The Christian wedding was charismatic with a dramatically lit up altar that hosted the holy cross accentuated by an Art Deco inspired crystal chandelier with suspended wisterias against a floral bedded wall as the central backdrop," Fathima elaborates. "The sparkler entrance has gone viral."

It's no longer just the celeb and the rich who have such weddings. "Young people take personal loans from banks for big weddings," says Ishaan Sarkar, CEO, Select ED, an event management company. "All that they want is to have a wedding that is 'better' than those of their friends or relatives. And there is no limit to 'better'," he says.

Indeed, there is nothing that weddings do not have. Dutta cites the case of a non resident Indian couple who planned out their wedding a year before the event. They got married on a beach with an amphitheatre-styled seating around them and the sea as the backdrop. Each guest was given a personalised beach bag filled with must-haves such as sunscreens, sandcastle builders, beer chillers, flip-flops and beach towels.

"We did a Caribbean themed sundowner, followed by a Mad Men cocktail night, a Bohemian mehendi and haldi party and Sufi sangeet," she says.

Some couples ask for customised monogrammed bathrobes for their guests. Some want elephants and a revolving jaimala stage where couples exchange garlands. Top singers including Shankar, Ehsaan and Loy, Sonu Nigam, Mika and Honey Singh are in great demand, says Tarandeep Singh, CEO of Master Sound. "We organise LED screens and projectors. The effect must be grand."

Raj Jaiswal, director, Wedding Sutra in Calcutta, agrees that most youngsters want theme weddings. "Some want their weddings based on peacocks or on a Rajbari, and weddings in palaces or beaches. Those who can't afford exotic places settle for a destination wedding in Puri," he says.

"Themes that revolve around love, fire, air and water are much in demand," holds Delhi wedding planner Kanika Seth. "For one wedding, the theme was, 'Around the world in four days', where we chose the couples' four favourite cities and arranged everything - décor, food, music and costumes - around them."

Most youngsters polled by The Telegraph indicate that they want a large number of guests to attend their wedding. But Candice Pereira, co-founder, Marry Me, says that the number of guests does not always make a wedding special. Her company, for instance, recently organised a wedding for just two guests.

"The couple from the UK came for a traditional private wedding ceremony. They started their celebrations in the UK with their legal wedding, moved on to Vegas, then to India," Pereira says.

Lavish weddings, social scientist Shiv Visvanathan believes, are an example of "conspicuous" consumption. "The idea is to make others envy them. It is a social signature that they make with big fat weddings," he says.

Bollywood has added to the fad. The seeds, some film scholars believe, were sown way back in 1994 with Hum Aapke Hain Kaun, a hit film that revolved around marriages and grand rituals. In recent times, too, gala weddings and songs have been showcased in a large number of films, from Vicky Donor to Queen and Tanu Weds Manu Returns.

"People want to imitate actors on the silver screen for the most special occasion of their life. There is an aspiration value attached to it," says adman Prahlad Kakkar.

"If there is one thing that's entirely recession-proof in India, it's the wedding industry. There are over 10 million weddings in the country every year. Even the bridal mehendi market is worth Rs 5,000 crore," Bansal says. "Also, with half of India's population fairly young, the marriage market is set to boom like never before over the next five to ten years."

Big, indeed, is getting bigger. "The sky is the limit," says Pereira.

I want the works!

The Telegraph carried out a snap poll of 74 young men and women — and found that most want a big wedding, oodles of guests and a honeymoon abroad. Here are the findings: