There’s a movement within a movement simmering in Jammu and Kashmir. Ladakh, the oft-ignored region of the state, wants out. Partha S. Banerjee spoke to Tsering Samphel, one of the more prominent voices from the Buddhist outpost, about why 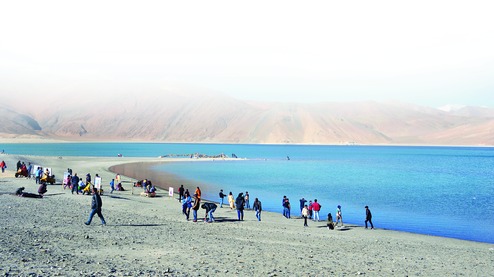 The houseboats are empty, the shikaras drift listlessly. The Dal Lake is shimmering yet melancholy, the enchantress left with none to enchant. A new stunner is on the itineraries today, 500 kilometres to the east, charming an unending stream of tourists. For the tens of thousands visiting Jammu and Kashmir this summer, it's Ladakh's Pangong lake that tops their must-see lists; the Dal only evokes television images of stone-pelting rioters.

Even as concertina coils entangle Srinagar's often locked-down roads, empty of visitors, Leh, Ladakh's once earthy district town, is booming with tourists, untroubled by the tumult down in the Valley. If the towering mountain range, traversing the state, separates the lush scenic splendour of Kashmir from the rugged austere beauty of Ladakh, it also segregates two entirely different cultures. And no echoes of aazadi waft over its snowy jagged lines.

"No Ladakhi has any part in the Kashmir movement," says Tsering Samphel, a veteran Ladakhi politician who heads the Congress party in the district. "The cry for independence has no basis for us. We live in our own world. But when we hear of the killings there in Kashmir, all the violence, we are disturbed, mentally disturbed, because we are so closely connected to the Valley."

"And we are affected," he continues. "The government is barely functioning in Srinagar. In some villages in the Valley, there are no policemen, no official work is getting done. Policemen are scared to wear their uniforms and everything is in the hands of the Hurriyat leaders. The government is sanctioning very little developmental work. And that is affecting us here in Ladakh because many development projects are stalled. When the state capital is affected with bandhs and strikes, we are affected too. And they discriminate against us. When projects are stalled in Kashmir, they stop the money flow here too."

Ladakhis want no part in Kashmir's secessionist movement but they want to secede from Jammu and Kashmir, and turn their district and the adjoining Zanskar region into a Union Territory. It is a longstanding demand, championed by all local politicians. In the 2014 Lok Sabha elections, Samphel lost to BJP's Thupsten Tsewang by just 36 votes "because he promised to make Ladakh a Union Territory in six months. Well, that hasn't happened," he smiles, "but it has to happen. The circumstances will make it happen. We see the creation of UT in the near future." In four or five years? "Yes, it has to be. Ladakh will have to be separated from J&K. Circumstances will push Delhi to take that decision."

"If the Indian government, if Modi sahib, wants to deal with a hard hand against the Kashmiri separatists," Samphel reasons, "then he must squeeze them. Separate Ladakh from J&K, take out Jammu, squeeze them. Squeeze their space, their physical space, their mental space. That's a way of disarming them politically." And then adds, "But there is no clear indication from Delhi about what plans they have to bring peace to the Valley."

"Modi's real test is Kashmir," Samphel observes. "That's his toughest examination paper. He has to clear this paper." How are his preparations getting along? Not too good, according to Samphel. "During the UPA regime, there was an attempt at political accommodation. That's how peace was restored; the situation now is getting worse than in the 1990s. The central government had said, 'The sky is the limit'. There were interlocutors talking to the people concerned. There was backdoor dialogue, secret communications, they (separatists) were kept engaged. And why deny them (separatist leaders) visits to Pakistan? Or prevent them from attending dinner at the Pakistan High Commission? Why beat them when they cry aazadi? One guy shouting aazadi won't make Kashmir independent. Keep them engaged. Let them attend seminars."

Will Modi pass? In many respects, the odds are stacked up, feels Samphel who was Ladakh's MLA in the Jammu and Kashmir Assembly between 1987 and 1992, the period in which the insurgency erupted. "With the daily television debates and the news about lynching, the Kashmiris are feeling the heat of Hindu dominance. They think the whole of India, and particularly the India media, is against them. And, of course, Pakistan is fuelling the fire. The PDP's coalition with the BJP has had a very adverse impact. There is a sense that the regime in Delhi will further suppress the Muslim Kashmiris."

While there are some Muslims in Ladakh too, most Ladakhis are Buddhists and, therefore, never sympathetic to the Kashmiri call for independence. Indeed, Ladakh is culturally and geographically closer to Tibet; it was a part of western Tibet's Guge empire in the early 10th century and when that empire broke up, one of the Guge king's sons, Pal-gyi-gon, became Ladakh's first monarch. Back then, Kashmir was predominantly Hindu and, bizarrely, it was a Ladakhi Buddhist prince who paved the way for the Valley's conversion into Islam.

The prince, Rinchen, came to Kashmir in 1320 following differences with his father, only to find the then Hindu kingdom in disarray after the depredations of a Mongol invasion. The king had fled and the chief minister sought Prince Rinchen's help to restore order. But Rinchen was more ambitious than the chief minister had reckoned; he had the minister assassinated, married his daughter and became king. After accession, the Buddhist prince wanted to convert to Hinduism, the then court religion of Kashmir, but was refused by the orthodox Brahmins. So he took to Islam. Rinchen Shah was born.

Back in Ladakh, Rinchen's father and his descendants continued to rule the state, with only occasional disruptions, until 1834 when the Dogra general from Jammu, Zorawar Singh, marched into Ladakh with an army of 10,000 men. The then Ladakhi king accepted Zorawar's terms (a tribute of Rs 15,000) for withdrawal but his queen would have none of it. The affronted Zorawar now marched into Leh, setting alight the nine-storey palace that overlooks the town; it was because of his conquest that Ladakh became part of the kingdom of Jammu and Kashmir, and eventually of India.

But Ladakhis now want to undo the link that Zorawar had forged, not least because of the troubles in Kashmir. "Let Jammu become a separate state, let Kashmir, along with Kargil, be given greater autonomy, and let Ladakh and Zanskar be turned into a Union Territory," Samphel proposed. "This internal division, on the lines of the Dickson Plan (proposed by Owen Dickson, Australian jurist, who was UN representative in Kashmir in the 1950s) could also go some way in resolving the Kashmir issue. But more importantly, it would free us from the unrest in Kashmir."