Jailhouse Rock:  The happy life of Chhota Rajan in Tihar

It was tom-tommed as a major breakthrough. Last year, the notorious Chhota Rajan was arrested abroad and brought back home. Since then, Velly Thevar reports, his captors have kept him well-padded behind bars 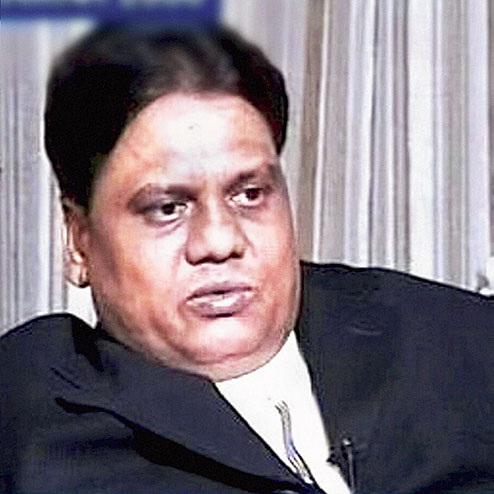 On October 25 it will be a year since gangster Chhota Rajan’s arrest in Indonesia. Rajan, a friend-turned-foe of the mafia boss Dawood Ibrahim, is currently in Delhi’s Tihar Jail and is being treated almost like a state guest of the Intelligence Bureau (IB) and the Central Bureau of Investigation (CBI).

Last month, the 56-year-old celebrated his punarjanm or rebirth in his high security prison cell amidst cartons of imported liquor. A cake was cut and a couple of prison officials came to join the in-jailhouse festivities after the lockdown time of 5pm. Some people gifted him an expensive diamond ring. Some others got him garlands. Jail officials, however, wouldn’t let the garlands through, as they were afraid they had no way to check for bombs hidden among the flowers, reveals an officer from the Delhi special cell who did not want to be identified.

Rewind to September 15, 2000. Rajan was in his friend Rohit Verma’s flat in Charan Court, Sukhumvit Soi, Bangkok, when Dawood’s Man Friday Chhota Shakeel’s men made an assassination bid on him. The rat-a-tat of guns. A volley of bullets. A scene out of Kill Bill. Verma and his wife died. But Rajan fled to survive.

Today, at Tihar, Rajan, is treated with kid gloves that also serve him well, apparently, on orders from the topmost in the national security establishment. He has a special room with a toilet attached; he is afforded home-cooked food and other privileges. His health issues — he is on dialysis — are attended to with alacrity.

Chhota Rajan was born Rajendra Sadashiv Nikhalje. He worked with Dawood Ibrahim in his crime syndicate. The two were notorious. Then in the mid-Nineties came the big split. Rajan and Dawood parted ways. It is widely known that soon after, Rajan became one of the main informers for the IB on Dawood’s activities and contacts. And Chhota Shakeel took his place in Dawood’s life.

After the failed attempt on his life, Rajan’s business partner and drug baron, Santosh Shetty, helped him find escape and safe haven. After his extradition to Mumbai, Shetty said in his statement to Mumbai police that he had dropped Rajan at the Cambodia border from where he managed a Cambodian army chopper for his getaway. Rajan was sure Dawood had spread the dragnet for him.

Rajan was on the move  the next 15 years, sometimes living on a ship, sometimes in Australia, sometimes in Iran. His kidneys started failing, he developed a fatty liver, heart problems, sugar fluctuations and hypertension. He wanted to come back home.

There is a lot of speculation about how or why the Indian government landed this big fish.

On November 5, 2015, Chhota Rajan landed in Indonesia from Australia masquerading as Mohan Kumar. Why the Australian officials tipped off the Indonesian authorities is not clear. What is known is that at the immigration counter in Bali when Rajan was asked his name, he blurted out his real name.

The IB tried to mislead the media about Rajan’s identity for the first 20 hours of his arrest. It said the man caught was Cyanide Mohan from Bangalore, the same who had killed 23 women. But then, the Bangalore police said Cyanide Mohan was in their custody.

Sources say the CBI was well aware of Mohan Kumar’s real identity, but the IB had no clue.

Soon after Rajan landed in India, prison officials received an SMS. It read: “How long will you save this dead pig from death, very soon I will do his ‘The End’”. The message was from Chhota Shakeel; the real source of that threat: Dawood himself, perhaps. Funnily — even intriguingly — the Mumbai police, which had been rubbing its hands in glee at the prospect of Rajan facing trial for over 68 cases, has done little to get him to face charges.

The CBI is clinging to the murder case of crime journalist J. Dey to keep him in prison. Mumbai’s additional commissioner of police (crime), K.M.M. Prasanna, says, “We have deputed Marathi speaking officers — one DCP, two ACPs and some 40 policemen — to the CBI. They have been helping CBI decode the cases.”

This begs the question whether the State really wants  Rajan to be brought to book. After all, there are serious charges of murder, extortion, smuggling and drug trafficking against him.

Former Mumbai police commissioner and now BJP MP from Baghpat in west UP, Satyapal Singh, says, “Chhota Rajan is not useful to us anymore. His network is almost non-existent.”

Some believe the rebirth celebration last month was not just to mark Rajan’s escape from the jaws of death, but also his introduction to the Indian intelligence agencies, the same that have ensured his safety for so many years.

And so ladies and gentleman, we have an elephant in the room. What colour it is, nobody could be sure; it could well be a white one.