Advertisement
Home / 7-days / ‘I’ve inherited his legacy of goodwill, but... he is a difficult role model to follow’

‘I’ve inherited his legacy of goodwill, but... he is a difficult role model to follow’ 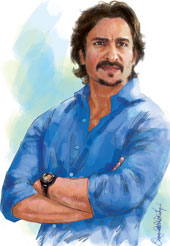 There Are Nawabs, And Then There Are Nawabs. Saif Ali Khan, The Nawab Of Bollywood And Pataudi, Tells Roshmila Bhattacharya That His Father And Grandfather Were Not Quite Like The Breast-baring Nawab He Recently Met In Lucknow   |     |   Published 21.04.13, 12:00 AM

Saif Ali Khan doesn’t believe in playing safe. He flagged the year off with the big-budget franchise Race 2, which had him in a starring role, and ended up with a box office gross of over Rs 100 crore. Any actor in his position would have stayed true to the formula of success. Not Saif, though. These days he is sporting a golden mane and a fake Russian accent, masquerading as a zombie hunter.

“My competition is not so much with others as it is with myself,” Khan says. The star-producer reasons that while it is important to have huge commercial hits, it’s equally important for him to do the kind of cinema he believes in and which reflects his sensibility. Which is why, now that his zom-com Go Goa Gone is all set for release, he is shooting for the gangster-thriller Bullet Raja in Lucknow.

So is the Nawab of Pataudi — the first born of cricketer Mansoor Ali Khan Pataudi and actress Sharmila Tagore — feeling at home in the city of nawabs? Khan insists that he doesn’t understand what being a nawab means. One of the nawabs he recently encountered in the Uttar Pradesh capital, he elaborates, had exposed his left breast because he was feeling hot. That’s not quite the nawabi image that conjures up when he thinks of his father, Mansoor Ali Khan Pataudi, or his grandfather, Iftikar Ali Khan. “They were austere, disciplined sportsmen and did not believe in wasting money on a lavish lifestyle,” he explains.

The Chhote Nawab, as he is often referred to, reminds you that a year after he was born on August 16, 1970, privy purses were abolished through the 26th amendment to the Constitution of India. “So I just caught the fag end of the glory days when cars with flags flying and special number plates drove straight to the tarmac with their passengers where a plane was waiting to fly them off,” he reminisces. “Pataudi, my hometown, is a different world today, but I still love it.”

Right now, of course, he is neither in his palace at Pataudi nor in his apartment in Mumbai. He is comfortably settled in Lucknow’s Taj Hotel that has redecorated the rooms in one wing and fitted them with DVD and music systems for its B-town guests. “Movie stars are more like princes today,” he chuckles over the telephone.

Not craving to get back home to his begum of six months? He replies that while he’s looking forward to being with his actress-wife Kareena Kapoor, she is a working woman too. “It’s good to be apart for brief periods with other things to do because when you are living together 24x7 it can lead to one partner imposing unfair demands on the other,” he rationalises, pointing out that Kareena and he plan their holidays together and a break in the Maldives is coming up soon.

He reasons that when a man is in a relationship he is usually torn between his love life and his work. “Marriage is a kind of commitment that you make to each other. And even though today that bond is not unbreakable, it still makes the relationship more secure. You can focus on work and making money to secure the future,” he avers.

Khan still has a string of law suits pending against him, but, by his own admission, is a “good boy” today. He believes he is calmer and more patient and settled than ever before. He agrees that part of the change has to do with turning 40 — which he did almost three years ago.

“When you’re younger, you fight over anything and everything you don’t like about your partner,” says Khan, who was earlier married to the actress, Amrita Singh, with whom he has two children. “But today I’m more accepting than expecting. Now I don’t over-think or over-react. I balance my time among my wife, mother and children. At work, I’m happy to see that there’s a market for ‘different’ kinds of films too provided you get the budget right. I want to read and write more, understand classical music and play the guitar better. And, yes, improve the mind,” he asserts.

Unlike most other actors, his interests are not limited to box office collections and workout routines. Khan can converse on anything, from philosophy to politics, from sports to books and music. He attributes this to a sound education at Lawrence School, Sanawar, Lockers Park School in Hertfordshire and Winchester College in England, where his father had studied too. “But I did not take advantage of my tenure at Winchester. My classmates went on to Oxford and Cambridge, but I was not academically inclined. When I applied myself, which was not often, I stood first. I should have studied harder,” he rues.

There’s relief mixed with pride because his daughter Sara has been accepted by Columbia University in New York — and Khan is confident Sara’s world will open up in a “marvellous way” once she settles down there. Quiz him on the buzz that the pretty teenager had been set on a career in the movies, and he says firmly, “Acting is a wonderful job even though it calls for a lot of hard work and patience. Sara is free to do whatever she wants, but not at the expense of a good education. She has always been more academically inclined and I would want her to focus on a university degree first.”

Is that a diktat for his son Ibrahim too? Khan admits that his younger child is not as serious about studies as his daughter. “But Ibrahim’s already been lectured extensively on the subject and has promised to focus more on academics. He’s a lovely guy,” daddy says with a fondness that is not hard to miss.

It’s obvious that while on the subject of academics Khan is inflexible, in other ways, he’s an indulgent parent who allows his children a long rope when it comes to choices. He admits as much, quoting from Khalil Gibran. “Your children are not your children/they are the sons and daughters of Life’s longing for itself/they come through you but not from you/and though they are with you, yet they belong not to you/you may give them your love but not your thoughts/for they have their own thoughts…”

It’s not often that you find a Bollywood movie star quoting Gibran, but then Khan has pedigree. His mother, Sharmila Tagore, was the great great grand-niece of Nobel Laureate Rabindranath Tagore and made her acting debut in the third part of Satyajit Ray’s celebrated Apu trilogy, Apur Sansar, in 1959. His father, the Nawab of Pataudi, was not just a suave cricketer-captain, but widely known as a well-spoken gentleman.

“There was something unique and special about abba,” the son agrees. “Many movie stars who appear larger than life on screen are demystified when you see them at home. But abba was a very enigmatic person and more of a mystery at home. You never knew what he was thinking of and that is the trait of a superstar,” he says.

He recalls that when someone from the family told his father that Saif was thinking of marrying Kareena, Tiger Pataudi’s reaction was true to style. He responded that Kareena had always been very nice with him, but since Saif was the one who was marrying her he hoped she would be equally nice to his son. “I’ve inherited his legacy of goodwill, but his distinctive way of thinking and doing things has passed away with him. He is a difficult role model to follow,” admits Khan who, following his father’s death on September 22, 2011, was entrusted with the responsibility of his mother, two sisters, Soha and Saba, and the estate.

Life, he agrees, has changed, but it moves on. “When you lose someone you love, you learn to accept the idea of death. It’s no longer so frightening,” he says. Perhaps that’s why he can see the lighter side to the dark, decaying culture of the undead. With Go Goa Gone which opens on May 10, he has turned the horror genre upside down and made zombies more fun than frightening. No, Saif Ali Khan Pataudi never did believe in playing safe.