Life without wife, maybe; life without baby, never. Actor Tusshar Kapoor is not alone — a growing tribe of urban Indian men is opting for adoption or assisted reproduction to experience the joys of fatherhood, finds Sharmistha Ghosal 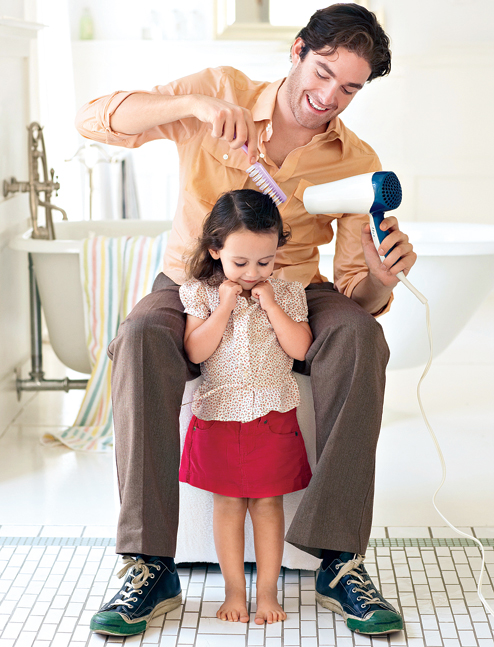 Little Laksshya is the centre of all attention. His grandparents are around him, as is his father, the actor Tusshar Kapoor. The only one missing is the mother. Kapoor's baby was born to a surrogate mother last week.

"My urge to be a father was more than the need to get married and that has been fulfilled now," says Kapoor, who is single. "The stereotypical definition of family is changing. And though I believe in the institution of marriage, it can wait till I find the right partner," Kapoor, 39, says.

In recent times, there have been several cases of single men opting for fatherhood - through surrogacy or adoption. Most such men are young, successful and secure in their careers, and do not wish to go through the cumbersome and often thorny process of marriages and relationships. Delhi-based psychologist Aruna Broota holds that they are either "defiant of social norms" or "really fond" of children.

Indeed, men are following the path that many women took 10 or 15 years ago. "For the past 15 years, I have been helping unmarried single women wanting to become mothers. But this trend of single men wanting to become fathers is relatively new, and such cases are coming to me for the past one-and-a-half years now," says Dr Firuza Parikh, director, assisted reproduction and genetics, Jaslok Hospital, Mumbai. Dr Parikh helped Kapoor become a father through surrogacy and in-vitro fertilisation (IVF).

Aditya Tiwari, a Pune-based software engineer from Indore, hit the headlines when he adopted a baby boy in January after a long bureacuratic struggle. The baby, who suffered from Down Syndrome, had been abandoned by his parents. "I saw him at a shelter home and felt an instant connection. I knew he was my child," says Tiwari, 27 and single.

Life has changed completely since then for Tiwari, who now divides his time between his demanding job and little Avnish.

Parents are stepping in to help out many of these single men. When Tiwari is at work, his parents take care of the child. "Marriage can wait and I am sure I will get someone as my wife who will share similar views and love Avnish," Tiwari adds.

Some men would rather not get married. Rajatava Banerjee, 34, is among them. "I saw my cousin suffer when his wife moved out with their child. He has no access to his son. I decided not to marry, since I wouldn't be able to survive such a breakdown of relations," says the software engineer from Calcutta. But Banerjee loves children and, after many rounds of discussions with his parents and friends, has opted for assisted reproduction through surrogacy. He is going through the procedure, says Dr Goutam Khastagir, an IVF expert and gynaecological surgeon.

Banerjee's family is by his side, but that's not always the case. In fact, Jyoti Swaroop Gupta, 45, initially faced stiff opposition from his family, especially his mother, when he adopted his first child, Amitesh Mangla, in September 2009. "My younger sister finally convinced my mother. And now my mother is not only a doting grandma, she also plays the role of a loving mother to my children," says the divorced government servant who has now adopted a second son.

There are different reasons why single men want to adopt or have children by surrogacy. Dr Parikh recalls that in one case, the father was a young widower who had lost his wife to cancer and who couldn't contemplate marriage again. "Another man went through a divorce because his wife did not want children. So he went ahead and planned a child," Dr Parikh says.

The urge to be a father can haunt a man in his sixties, too. Barasat resident Dipak Bhattacharya is looking for a healthy surrogate mother to carry his child. "I have saved and invested money wisely for a baby. I heard of a couple in Haryana having a surrogate baby at the age of 70. With people living longer, 60 is the new 40," Bhattacharya, 60, says.

Doctors, however, question a man closely to see how serious he is about having a child. Dr Parikh says Kapoor had been thinking of becoming a father for five years. "We had a few sessions of counselling with him and he came across as a sensitive, clear thinking and logical person, who had the support of family and friends, which is very important for a child's welfare. So, we decided to go ahead with it."

Many suggest that the concept of family has been slowly changing. Even some years ago, same sex couples with children were unheard of - but are not uncommon any more. "Now men are aspiring to parenthood in unconventional ways and there is social acceptance to this desire. This is important for those in same-sex relations. It redefines what we mean by family, which need not be a heterosexual family that is till now the only acceptable form," says Ruchira Goswami, a sociologist at the National University for Juridical Sciences, Calcutta.

What does the law say about it? According to chapter three of the National Guidelines for Accreditation, Supervision and Regulation of Artificial Reproductive Technology (ART) Clinics in India, 2005, prepared by the Indian Council for Medical Research (ICMR), there is no bar to the use of ART by single women. The successive draft ART (Regulation) Bills in 2008, 2010 and 2013 proposed that ART in India would be available to all, including single persons and foreign couples. However, the draft ART Bills of 2014 and 2016 have sought to restrict surrogacy to married Indian infertile couples only.

"The final version of the ART Bill has not yet been debated in Parliament and the ICMR 2005 guidelines rule the roost. Moreover, there is neither a distinct ban on single parent surrogacy for single Indian parents, nor any statutory codified law that bars the same," states Anil Malhotra, international family law advocate and author of Surrogacy In India: A Law In Making (2013) and Surrogacy In India: A Law In Making - Revisited (2015).

The rules are clearer for adoption. The latest guidelines governing the adoption of children notified on July 17, 2015, permit single parent adoption, but bar single men from adopting girls.

There is some concern, however, about a trend that negates the role of the mother. "I think every child wants a feminine touch, which is part of growing up. But if a man has a good support system, where his mother or sister can take care of the child and give the child adequate time, the mother may be missed less. But a mother is a mother as these are bonds created by nature," says Dr Broota.

Single fathers refute this argument. "A father can also be a mother, just as a mother can be a father to a child. No one is absolutely indispensable. All one needs is pure love," Gupta argues. "I know that unlike others, my child will not get to know who his mother is. But he is my son, my blood and that's enough," Kapoor adds.

Sociologist Andre Beteille feels there is a long way to go before this trend becomes a wide enough practice to affect the family structure. "Single males adopting or becoming fathers through surrogacy might be taking place in increasing numbers nowadays, but that's not enough to change the social fabric or the concept of family in the long run," he says.

( Some names have been changed to protect identities)