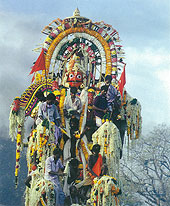 Balasubramanium Sekar’s friends often envy his perfect family life. His wife is an efficient homemaker and his children shine in school. “Nobody knows my dark secret,” says Sekar, founder, Social Welfare Association for Men, a Chennai-based non-governmental organisation (NGO) that works in the area of AIDS awareness and human rights.

Every year, on the first full-moon night after the Tamil New Year — which falls in April — Sekar tells his wife he has to go on an official two-day tour. It’s actually a cover-up. Sekar spends those two days in Koovagam, a small village 180 km south of Chennai.

About 25,000 transvestites from across India gather at Koovagam to celebrate the Kuthandavar-Aravan festival, in which they pretend to marry a warrior-god, Aravan, mentioned in the Mahabharata.

Sekar will do the same. “I’ll dress like a woman, sing and gossip with my girl friends and have homosexual sex in the paddy fields — without worrying about the police and the public,” he says. Sekar justifies his annual rendezvous at Koovagam saying it’s the only chance he gets to flaunt his sexuality. “I have always wanted to be a woman. Koovagam gives me the space to become one, without standing out from the crowd.”

An STD booth is the only sign of modernity in Koovagam. A nondescript, sleepy and sultry village, Koovagam is dotted with thatched huts, mud roads, two shack-like shops and sprawling, dry paddy fields. The closest urban town, Villupuram, is a 40-minute bumpy drive away.

Koovagam has 400 farmer families. But on hot April days, as they wait for the rains to bathe their paddy fields, the village looks almost deserted. Even the historic 200-year-old Aravan temple, in the heart of the village, lies locked.

But Koovagam springs to life on the last full moon night of April. This is festival time in the village. For a few days, the quiet of the village is replaced by a cacophony of colours and music as thousands of people descend on the village. Almost all are eunuchs, or hijras, as many like to call themselves, and cross-dressing men, dressed in silk saris and jewellery. The Aravan temple is decked in banana leaves and flowers.

The festival is unique because it is dominated entirely by the third sex. “In India, the life of a hijra is marked by rejection, abuse and loneliness. This festival is one of the few mass gatherings of people of alternate sexuality where they feel free to be who they are. This makes the event socially intriguing,” says Lalita Kumaramangalam, executive director, Prakriti, a Chennai-based NGO that works with transgender and HIV-infected people.

The Kuthandavar-Aravan festival is an enactment of a legend from the ancient Indian epic, the Mahabharata. According to the epic, Prince Aravan had to be sacrificed by the Pandavas to win the war against the Kauravas. Aravan asked to get married and enjoy sexual bliss on his last night. To fulfil this wish, Krishna took on a female form, married Aravan and became a widow the next day.

Over the years, the Aravan festival has started attracting thousands of cross-dressing men. “Cross-dressing men lead double lives. The festival gives them a platform to flaunt their feminine side,” says Asha Bharathi, president, Tamil Nadu Aravaganigal Association, a Chennai-based group that works with the transgender community.

Six months before the Aravan festival, Umesh, a Bangalore-based homosexual male, starts saving money for the big day. On weekends, he shops for saris, bangles and wigs. “I fulfill all my fantasies during the festival. I dress, walk and talk like a woman. I get married to a man, Lord Aravan, and put vermilion in my hair. There are no restrictions and no one’s watching,” says Umesh.

Though the festival is spread over 18 days, it reaches a crescendo only during the last two days — which fall on the first two days of May this year. The temple is opened and decorated. Shops selling artificial jewellery, clothes, cosmetics and camphor spring up along Koovagam’s mud roads. The village bustles with people. Men can be commonly seen buying wigs, blouses and brassieres. Nobody stops to stare.

The Miss India-mania has touched the Aravan festival. A Miss Koovagam competition organised at the festival is a huge draw. “Over a 100 eunuchs compete for the crown. They come prepared with their best make up, clothes and answers to questions posed,” says M. Mathew, programme officer at the Association for Rural Mass India (ARM), a Villupuram-based NGO that works with the community. It also organises a dance competition, a debate and a Best Hair competition at the festival.

A little political colour is also being added to the show. This year, the ARM will organise a rally demanding ration cards and jobs for the transgender community. “We are demanding that the government take action against teasing and violence against hijras,” says Mathew.

But for two days, the 25,000 transgender and cross-dressing men who converge in Koovagam forget their worries. The half-horse village metamorphoses into an arena of festivity, prayers and sexual encounters. The villagers join in, renting out their rooms or setting up shops. For the villagers, too, the festival is a way of life.

On the last night of the festival, the eunuchs get married to the Aravan idol. The temple priest ties a matrimonial thread — called a thali — around the neck of all the brides, to the beat of marriage music and the chanting of mantras.

Then, as per legend, they consummate the marriage. “Sex has a religious sanction that night. Everybody does it — either with their own partners or someone they pick up at the festival,” says Prakriti’s Kumaramangalam. Given the housing space crunch in Koovagam, the sprawling paddy fields come handy. “The fields are full of copulating couples at night,” says Kumaramangalam.

The free sex at the festival has begun attracting a lot of outsiders in recent years. “Ten per cent people attending the festival are outsiders. They come looking for easy fun,” says Kumaramangalam.

HIV thrives in these high-risk settings. “There is intense multi-partner homosexual activity and low usage of condoms. There is also a risk of the infection spreading to the general population,” says Kumaramangalam.

In the last few years, NGOs have begun setting up safe-sex stalls and mobile clinics for distributing condoms and organising awareness programmes. “Even the cultural programmes and Miss Koovagam competitions we organise have the HIV issue weaved into them,” says ARM’s Mathew.

On the last day of the festival, the morning after the wedding revelry, an image of Aravan is paraded around the village and then destroyed. The now-widowed eunuchs break their thalis and bangles and don white saris. The mourning is marked by dramatic wailing and chest beating.

The mourning seems more than symbolic. It ends the transgender community’s brief escape from real life.