Bong for Buck; it's Calcutta

The city's youth have a new narrative of belonging and a new grammar. Upala Sen reports 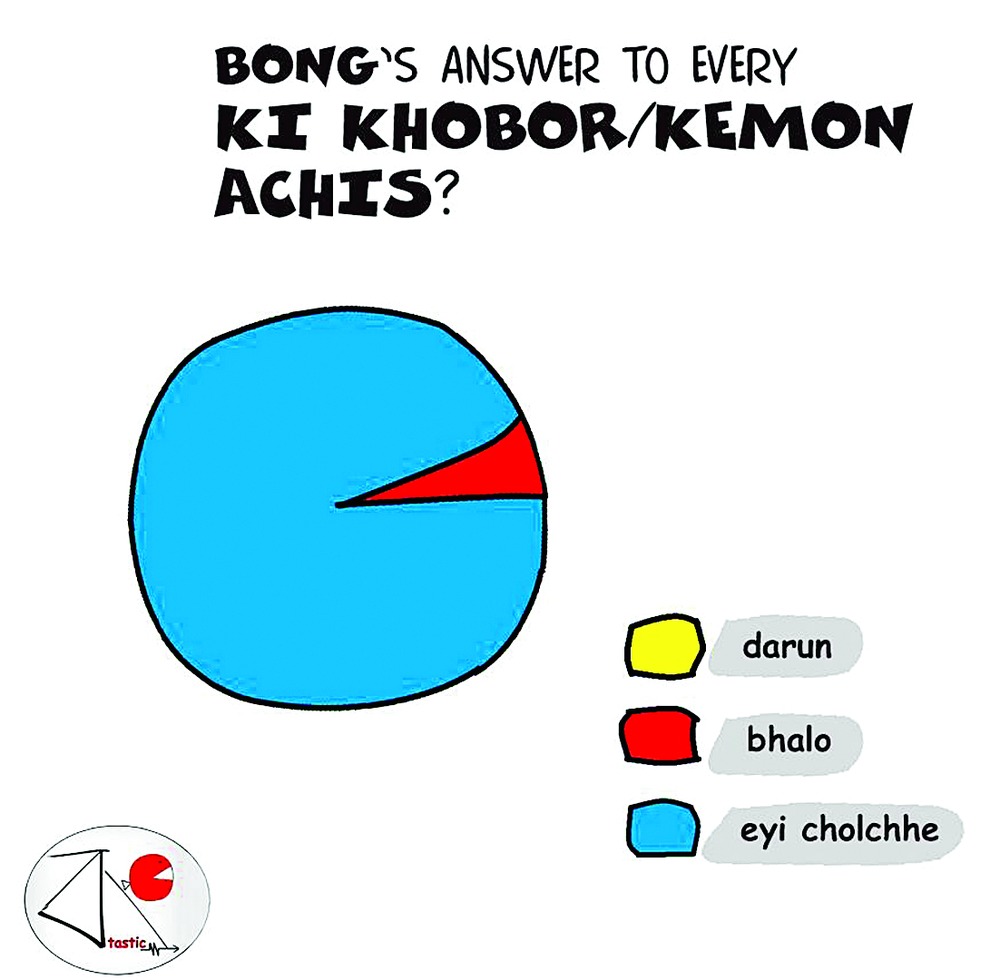 That's what The Bong Sense is all about - a Facebook page, a representation of the most commonplace, adhesive Bengali things.

Within five months of its debut, it has garnered a lakh followers, enough to ensure that Bong or not, you will have seen at least one Bong Sense doodle - stick figures or graphs against saffron or copper sulphate-blue backgrounds with short messages in neat good-boy hand - coming into your Facebook homefeed, completely unsolicited.

Bongtastic, a compound of Bong and statistics, and not Bong and fantastic as you might have thought, is a similar Facebook page, but older to The Bong Sense by a couple of months.

When its founder, the 26-year-old Rohan Mitra started the page this February, the very first post, a pie chart titled "Things Bengalis are tired of hearing" got 2.4 million views. Within four hours it went viral. From 54 likes to 5,000 plus likes. The posts that followed were mostly graphs and charts and clever imaging with punny one-liners and very, very Bengali in-jokes.

Both The Bong Sense and Bongtastic were born of a longing for home and its comfortable little-big familiarity. "Buy mangsho on Sundays, the trip to Gariahat for a haircut, the zoo in winter, littered with orange peels...," Arpan's list of reminiscings is long.

"I left the city immediately after school. For my grads. I am now in Bangalore. Before this, I was in Chennai, Raipur... So there was this lingering feeling of Bangaliyana. I am a mechanical engineer. I can fix things. So this is how I fixed this [fractured Bangaliyana]," says Rohan.

According to Arpan, another trigger is the deep sense of belonging that comes through only after the jolting geographical dislocation.

"When you step back from things, you can see the fine structures more clearly," he says. "I now love the nihilist and complicated way a Bengali thinks. It had seemed perfectly normal when I used to live in Calcutta. Bengalis are not super optimistic by nature, don't believe good things will happen to them, and this is something I find extremely funny and endearing now."

The Bong Sense and Bongtastic are not just imbued by the emotions of their creators, they are also steeped in their nerdiness.

One of the more recent posts of The Bong Sense is a "character interaction chart" from Gupi Gyne Bagha Byne. "It is perhaps too much for the audience to take in," admits Arpan. "Sometimes, I get too academic." He had a moderate expectation of the page when he set out, he says. "I had already tested the material in other pages. I was expecting a 1,000 followers in the first week, what happened next was beyond expectations." His fan following has so far been unflagging.

Bongtastic, according to those in the know, shouldn't be judged by its current number of followers - a little over 30,000 - or the current posts, mostly reposts of other Calcutta and Bengali-centric sites and pages. "Office project work. I am not getting time to concentrate on this," explains Rohan, who, like most of his audience and Roy, is a probashi.

Not so, the birthers of Calcutta Cacophony and Beacon Kolkata.

"Everyone wanted to leave Calcutta. Everyone seemed to think there was nothing here. Actually, a lot was happening. Only, people didn't know about these things. We wanted to fill in the blank," says Ankita.

The Instagram account invited photo submissions. "We reposted photographs of Calcutta," says Ankita. The response was good; nearly 25,000 followers. The Facebook page was born eventually. The page, as it stands today, is a mix of articles, memes, scribbles and photographs, apart from announcements of Calcutta events. It has above 60,000 plus followers with a reach of above 3.5 lakh.

As the responses increased, the team grew. "From doing our first few meetings on the footpath, we have graduated to renting a place when the need arises," says Rishi. As for the team size? That would be 80. "It's all work-from-home. And most of us are students - school and mostly college - doing this because we want to do this," says Ankita.

Today, the team calls itself a "social media publicity forum" for all things related to Calcutta.

Earlier this year, the Kolkata Book Fair reached out to Calcutta Cacophony, for the Kolkata Lit Fest. "You presume that the literary fest is common knowledge. Wrong. It is limited to this group, this intelligentsia. We spread the word," explains Rishi.

What is the one takeaway from running an initiative like this? Says Ankita with a laugh, "That true blue Calcuttans are crazy nostalgic about the city. They are our regular visitors. They are the ones who stay back. Not because they have to, but because they want to."

Beacon Kolkata sprung from the consciousness of Mohammed Sohail, a student of NSHM College, Calcutta, in 2014. "There was a lack of grass roots information about the city that would appeal to the youth," says Sohail. So he put together a monthly magazine, all of a single black-and-white broadsheet titled The Beacon - your daily dose of Kolkata.

"The initial cost was borne by saving up pocket money and applying the 'beg-borrow-steal' model but the distribution was all about long hours spent on the streets, outside colleges or pleading with restaurant owners to display copies of the issues."

A couple of months down the line, Sohail met Debdutto Banerjee, an MTech student and a photographer with a very definite focus - Calcuttascape. "It is with Debdutto's help that the online avatar of Beacon Kolkata worked out in 2015," says Sohail, who now helms a team of five people from a "small place".

Beacon Kolkata has about a lakh viewers, of whom about 80 per cent are from the city. It's a young audience. "Between 18 and 35," says Sohail.

The site is a "full-fledged online magazine" with stories and information and updates about the city. There are the usual listicles, memes, photo stories, videos and event promotions, all created by students and fresh graduates.

But what Sohail takes pride in is that Beacon Kolkata plumbs the innards of the city. "Everyone thinks Calcutta is about rosogolla. Calcutta itself has been stereotyped. How many people know about the Chhana Express that pulls into the city every morning at 5am? We tell those stories."

There is a lot of cross-referencing and posting going on between these initiatives. The impact of this coming together, much like Arpan's character interaction map, first befuddles, then overwhelms and finally, reassures.

No, the sun is not setting on this empire.