In 1962, China attacked India. At the height of the war, Prime Minister Jawaharlal Nehru feared that the whole of Assam, Tripura, Manipur and Nagaland too would pass into Chinese hands. So he wrote two secret letters to US President John F. Kennedy — letters whose existence successive Indian governments have denied. An extract from Bruce Riedel ’s new book 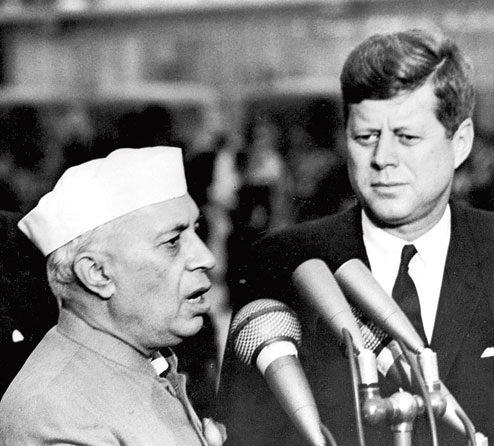 The Chinese victory was swift and decisive. By early morning on November 20 the Fourth Division had ceased to exist as an organised combat formation. The PLA (People's Liberation Army) seized the Se La pass and then moved south past the town of Bomdila. The Indians' heavy equipment and artillery were captured, as were the American automatic rifles still in their crates. The eastern portion of NEFA [North East Frontier Agency] was also in Chinese hands, as was all of the territory that Beijing claimed in the eastern sector south of the McMahon Line. More than 32,000 square miles of Indian territory was lost to the PLA.

News of the "Black November" disaster began to arrive in New Delhi on November 17, but its full extent only became apparent two days later. In his diary [American ambassador John Kenneth] Galbraith wrote that November 19 "was a day of unbelievably dismal developments. The Chinese had taken over most of NEFA and with incredible speed. The Indians at all levels are in a state of shock." All Indian Airlines flights across the country were cancelled to divert the aircraft to military use. In his memoir written years later, Galbraith writes that not only Assam but also Bengal and Calcutta were at risk, although in retrospect he acknowledges that attacking them would have posed formidable logistical challenges to the PLA.

On the evening of November 19, the ambassador was hosting a delegation of US senators, including Mike Mansfield (D-Montana) and Claiborne Pell (D-Rhode Island), for dinner at Roosevelt House. The Indian finance minister Morarji Desai was the guest of honour. Galbraith recalled that Desai "was sunk in gloom... it was a hideous evening and I brought it to an end as quickly as possible."...

At the peak of the crisis on November 19, [Jawaharlal] Nehru wrote two letters to Kennedy. They were delivered immediately by the Indian embassy in Washington to the White House and also to Galbraith in India. The existence of these two letters, especially of the second one, was not made public at the time. In his diary Galbraith makes only a cursory mention of them, writing that "not one but two pleas for help are coming to us, the second one of them still highly confidential."

For years afterward, successive Indian governments denied that the letters existed. Nehru's successor Lal Bahadur Shastri said he had conducted a thorough review of the prime minister's secretariat and the ministry of external affairs, but found no evidence of them.

For its part, the US Department of State archives acknowledged that two letters had been received by JFK from Nehru, but kept the contents secret. For years, copies of the letters held at the John F. Kennedy Presidential Library and Museum were heavily redacted, allegedly in part at the request of the government of India. Then in 2010 the library made available the original letters in full, giving scholars the opportunity to analyse the exact text.

The first, "EYES ONLY", letter begins with an expression of Nehru's gratitude for what Kennedy had already done since the attack began in October. "We are extremely grateful to you and the Government and people of the USA for the practical support given to us," Nehru wrote... Nehru then told the President that during the lull in fighting in early November, the Chinese had "made full preparations" for a second attack. Two Indian divisions were now "fighting difficult rear guard actions" in NEFA and might not last much longer.

Nehru described the grim battlefield situation: "The Chinese are, by and large, in possession of the greater part of the North East Frontier Agency and are poised to overrun Chushul in Ladakh" in the Kashmir. "There is nothing to stop them till they reach Leh..."

Then Nehru came to the point of the letter: India needed "air transport and jet fighters to stem the Chinese tide of aggression. A lot more effort, both from us and from our friends will be required to roll back this aggressive tide." ...

Nehru was thus asking Kennedy to join the war against China by partnering in an air war to defeat the PLA. It was a momentous request that the Indian Prime Minister was making. Just a decade after American forces had reached a cease-fire with the Chinese Communist Forces in Korea, India was asking JFK to join a new war against Communist China. Galbraith sent the telegram in advance of the letter because he knew he had to buy some time for the President to consider the huge commitment India was seeking. He said he would urge Nehru not to start any air strikes prematurely and for the Indians' "careful consideration of the acceleration of the conflict in the air". Yet he warned the President that the "Indian mood is desperate and the situation indeed grim". Galbraith's urgent telegram concluded, "I have learned of this move under conditions of greatest confidence even senior ministers not being yet informed. My staff is not informed. You must protect the fact of my knowledge and this warning now and indefinitely."

India's ambassador in Washington, Braj Kumar Nehru, delivered the second letter late in the evening of November 19. It began with a dire assessment of the situation facing India: "Within a few hours of dispatching my earlier message of today, the situation in the NEFA command has deteriorated still further." Nehru wrote that "the entire Brahmaputra Valley is seriously threatened and unless something is done immediately to stem the tide the whole of Assam, Tripura, Manipur and Nagaland would also pass into Chinese hands." Even worse, Nehru warned that the Chinese had "massive forces" north of Sikkim and Bhutan, and "another invasion from that direction appears imminent."... Without American airpower Nehru believed India faced "a catastrophe for our country."

India's only hope was to counter China's gains on the ground with the use of airpower, but India lacked "air and radar equipment to defend against retaliatory action by the Chinese." Nehru made his request specific: "A minimum of 12 squadrons of supersonic all weather fighters are essential. We have no modern radar cover in the country. The United States Air Force personnel will have to man these fighters and radar installations while our personnel are being trained." The Indian Prime Minister spelled out the implications of his request, writing that "US fighters and transport planes manned by US personnel will be used for the present to protect our cities and installations" from the Chinese. Moreover, American pilots and fighters would "assist the Indian Air Force in air battles with the Chinese air force over Indian areas," while Indian aircraft attacked Chinese PLA troops and supply lines on the ground. Air attacks inside Tibet would be undertaken by the Indian Air Force alone.

In addition to the fighters and radar installations manned by Americans, Nehru also requested "two squadrons of B-47 Bombers" to strike in Tibet. India would "like to send immediately our pilots and technicians for training in the United States" to operate these sophisticated long-range jet bombers. The Prime Minister assured JFK that the equipment would not be used against Pakistan, but only for "resistance against the Chinese." The stakes were "not merely the survival of India," Nehru told Kennedy, "but the survival of free and independent governments in the whole of this subcontinent or in Asia."...

In this second letter Nehru was, in fact, asking Kennedy for some 350 combat aircraft and crews: twelve squadrons of fighter aircraft with twenty-four jets in each and two bomber squadrons. At least 10,000 personnel would be needed to staff and operate the jets, provide radar support, and conduct logistical support for the operation...

Ambassador B.K. Nehru was so stunned by the contents of the messages from Prime Minister Nehru that he did not show them to any of his staff and kept the only copies in his own desk. Many years later he told an American historian that Nehru must have been exhausted and psychologically devastated by the news of India's defeats when he sent the two letters. The British Prime Minister received similar letters that Harold Macmillan referred to briefly in his memoirs as "agitated"...

The ambassador [Galbraith] and the visiting US senators called on Nehru the morning of November 20 and then shared lunch with the Prime Minister. After lunch Galbraith hoped for a nap, but instead "a message came from President Kennedy" replying to Nehru's two urgent letters. Kennedy proposed to send immediately a high- level mission led by ambassador Averell Harriman, a longtime friend of Galbraith's, to assess India's needs. He also promised to immediately increase the airlift of supplies and to deploy the US Navy to the Bay of Bengal. An aircraft carrier was dispatched to sail to Madras, but was later recalled when the crisis eased. Galbraith informed the Indians of Kennedy's promises and then "had dinner with the children" before a long telegram arrived from Secretary Rusk "asking questions I had answered before" about the "second midnight letter". Galbraith's diary reports that he "dictated a lengthy answer to all points and then ended with the prediction that the Chinese would not, as the Indians assumed, press forward on all fronts."

What Nehru asked Kennedy for

• “A minimum of 12 squadrons of supersonic all weather fighters are essential. We have no modern radar cover in the country. United States Air Force personnel will have to man these fighters and radar installations while our personnel are being trained.”

• “US fighters and transport planes manned by US personnel will be used for the present to protect our cities and installations” from the Chinese. Moreover, American pilots and fighters would “assist the Indian Air Force in air battles with the Chinese air force over Indian areas,” while Indian aircraft attacked Chinese PLA troops and supply lines on the ground.

• Air attacks inside Tibet would be undertaken by the Indian Air Force alone.

Extracted from JFK’s Forgotten Crisis: Tibet, the CIA, and the Sino-Indian War by Bruce Riedel; Published by HarperCollins; Price: Rs 699