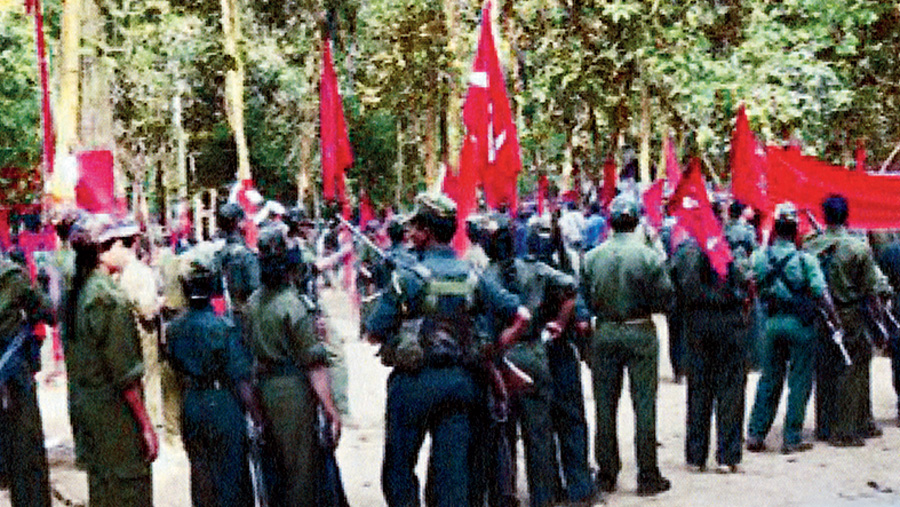 Speculation over Muppala Lakshmana Rao alias Ganapathy, the former general-secretary of the outlawed Communist Party of India (Maoist), surrendering is rife. The possibility of Ganapathy’s surrender not only signals the fall of the ‘revolutionary ideology’ but also highlights factionalism among the Maoist leadership. Having lost substantial ground to the security forces, the Maoists are now limited to pockets in Chhattisgarh, Jharkhand, Odisha and Maharashtra. With Nambala Keshav Rao alias Basavaraj taking over the mantle of general-secretary and Madvi Hidma, a tribal from Sukma, the chief of the Central Military Commission, the ideological imperatives of the Maoists may be taking a back seat. Basavaraj’s prime strategy, it seems, is to scotch the growing perception that the Maoist movement is on its last legs.

While their movement is losing support base and is not being able to spread to new areas, it wouldn’t be right to write the Maoists off. The killing of 17 security personnel in Sukma in March this year and, again, 15 of them in Gadchiroli, Maharashtra, in May 2019 demonstrate the ability of Maoists to launch strikes. The State may have an upper hand but it has not been able to end the conflict. While dealing with the Maoist conflict, the Indian State has adopted the twin approach of security and development along with surrender and rehabilitation and ensuring the rights of local communities. The development initiatives, the State claims, have been ‘effective’ but the challenge has remained. Similarly, in their decades-long movement, the Maoists are yet to achieve any of their stated objectives. In a conflict in which both parties are engaged in violence and counter-violence, the only option that could reduce risks is dialogue.

The State does not have a rich experience in this respect. Peace talks between the Maoists and the government of undivided Andhra Pradesh ended abruptly adding to mutual bitterness; the West Bengal government’s intention to hold peace talks did not materialize either. A number of well-meaning civil society organizations have, however, underlined the need for dialogue between the State and the Maoists.

The role of the State is critical in facilitating a dialogue. It is the State that must create the conditions that would convince the Maoists to sit across the table for negotiation. As a first step, the withdrawal of the Central Armed Police Forces deployed in and around areas with Maoist presence would send out a positive message. Since Maoist violence is on the decline, a temporary withdrawal of the CAPF merits scrutiny. The Maoists should reciprocate by shunning violence completely. A second step should be the identification of civil society groups, especially those working at the local level, which can articulate the demands of the Maoists and reason with the State’s perspective. These organizations must be able to identify local issues integral to the dialogue. This is because contrary to the popular idea that the Maoist insurgency concerns overarching national issues, the grievances at the local level differ substantially.

The Maoists must come up with clear demands concerning the people they claim to represent. Coating such demands with ideological rhetoric creates ambiguities in the entire process. The absence of a formal dialogue between the State and the Maoists notwithstanding, there are reports of informal negotiations between the Maoists and the local people, political parties and social organizations across multiple spaces and fora. Formal negotiations might consider drawing ideas from these exchanges. But attempts by one party to win over the other could potentially derail the process. This, in turn, would have disastrous implications for the people that both warring parties claim to represent.