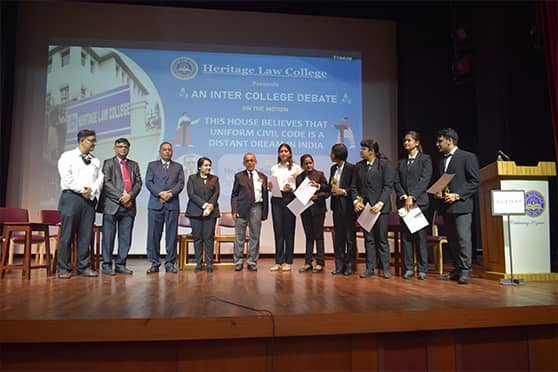 The winner and runner-up teams receive trophies and certificates. Students

Advertisement
Summary
The motion of the inter-college debate competition was ‘This House believes that Uniform Civil Code is a distant dream in India’
South Calcutta Law College, Sister Nivedita University, Jogesh Chandra Chaudhuri Law College and UEM were among the participants

Heritage Law College, Kolkata, hosted an inter-college debate championship last month to mark Zero Discrimination Day. The motion of the debate was This House believes that Uniform Civil Code is a distant dream in India.

“The topic of the debate is very interesting and exciting in the present scenario. It is a universal truth that social change is inevitable and some changes are uncontrollable, while some changes are manageable and evolve according to the needs of the society,” said Subhrangshu Sekhar Chatterji, dean of Heritage Law College.

Highlights of what the speakers had to say:

While I was coming into the building, I saw a flag outside. It was not of any caste, religion or creed, but identity. It was the Indian flag, which is a symbol of peace and harmony. This is what binds us all because we find beauty in our diversity and the Uniform Civil Code (UCC) is something that can help us achieve it in a better way.

India is a very religious country and if we go forward with the UCC, there’s bound to be some kind of political backlash, especially from religious groups.

— Nilanjan Bose, Calcutta University: Department of Law, for the motion

The preamble of the Constitution states that India is a sovereign, socialist, secular, democratic republic. By the term secular, I mean that the state and religion are separate and must be left like that. For me, the idea of UCC is absurd because unity at the expense of diversity comes with another concept, the erosion of identities.

Section 1 of the Indian constitution states that India is a union of states. We will strive to achieve unity and this generation will bring success to the nation.

— Samudra Gupta, University of Engineering and Management, against the motion

I would like to stress the need for implementation of UCC, firstly to address the gender disparity produced by different religious laws. Secondly, to address personal laws. Thirdly, to aid the integration of India and fourthly, to ensure that all the citizens in India have an equal footing and lastly to promote secularism.

The main motive of the UCC is to implement a jurisdiction that would be just and unbiased for all the citizens of India, irrespective and regardless of their tribe, caste and religion. Maximum civil laws of India, which govern the masses regarding all civil matters, such as the Indian Contract Act, 1872, The Civil Procedure Code, The Evidence Act 1872 and The Partnership Act 1932, can be categorised under a uniform civil code because they treat everyone equally.

— Somsourjo Roy, University of Engineering and Management, against the motion