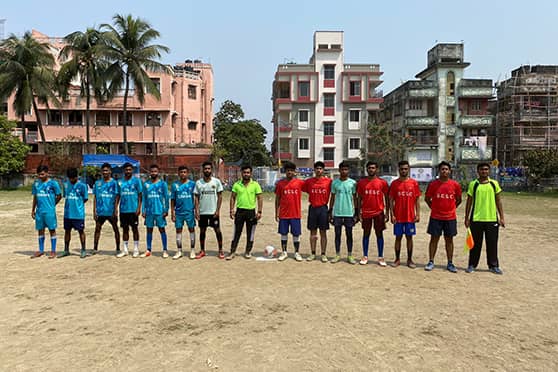 The football teams from Ballygunge Science College and Gariahat ITI before the final match. Source: Students

The triannual event hosted by the students’ union of South Calcutta Law College was the first fest to be held offline since the campus reopened in January 2022.

The second day saw students participating in Cross Examination, a debate competition; Banglish Medley, a solo singing competition; and Bring It On, a solo dance competition.

From Bharatanatyam, Odissi and Kathak to contemporary, the Bring It On stage saw dances of all genres. Kohinoor Dutta from Asutosh College won the competition. Anju Dutta and Paramita Sarder, both second-year students of Gariahat ITI, bagged the second and the third positions.

The fest drew to a close with a live concert by singer Silajit Majumder and his band.