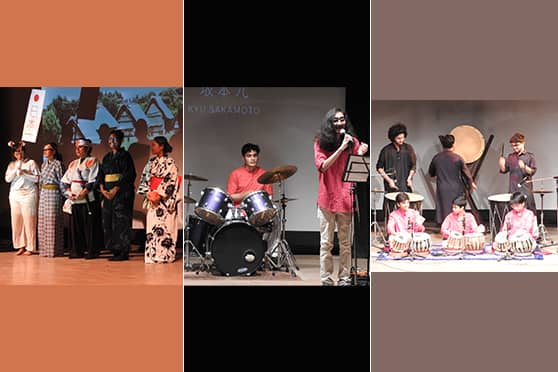 The beats of the taiko and the soulful melody of Japanese music filled the air at Rabindra Okakura Bhavan on April 3. The audience witnessed cultural performances as students took the stage to showcased their talents at the 37th In-Nichi Bunkasai, an Indo-Japanese cultural programme.

The two-hour programme included a table-taiko fusion, a Japanese folk tale skit called Momotarou, Haiku recitation, solo music, dance and a performance by band Yume. The language teachers joined in the fun by putting up two plays — Sagishi no Seijin and Mind Your Japanese Language!

Edugraph caught up with some of the performers

I have been taking tabla lessons from Pandit Tanmay Bose for 14 years. It was amazing to perform today. The entire concept of playing the taiko (a Japanese percussion instrument) was initiated by Bose and former consul general, Kolkata, Masayuki Taga. It is a joint effort to bring together two cultures. We practised virtually. After that, we met each other, discussed the art and practised.

I study Japanese at the International Institute of Language and Culture (IILC). I performed the Japanese song Homura by Lisa. I participated in a virtual singing competition organised by the NKKS and the consulate general of Japan. It was held virtually last year. I won the competition, which gave me the confidence to sing today. I am a self-trained singer. I was nervous at first but the people were very nice and it felt good to be back on stage.

I started learning Japanese in 2018 at Ramakrishna Mission Institute of Culture (RMIC). I danced to the tune of Sayonaro no Natsu. This song happens to be from an anime called Up on Poppy Hill. I performed waacking and contemporary.

I was a part of Momotarou, a theatre performance. I narrated, co-authored and also helped with the props. The story is about an old lady and gentleman finding a peach. They cut the fruit and find a little boy inside. As the boy grows up, demons disturb the villagers and he plans to defeat the demons so that the villagers can live peacefully.

I have been studying Japanese at Ramakrishna Mission Institute of Culture for the last eight months. I played the lead character in the play, Momotarou. We have been preparing for two-and-a-half months. First, we wrote the script and got it approved. Then we edited it and zeroed down on the cast. Initially, we started practising our dialogues, timing and sequence of scenes virtually. During the last month, we meet once or twice every week and rehearsed offline. We got to know more about the culture of Japan through this folk tale.

I have been studying Japanese at Ramakrishna Mission Institute of Culture since late 2021. I played the role of Oji San, a grandfather in Momotarou. I wore a costume called Yukata. This experience helped me brush up on my acting skills.

I arranged the background music for the play Momotaru. The song was pre-recorded. It took two weeks to get the music together. I study the Japanese language at Ramakrishna Mission Institute of Culture.