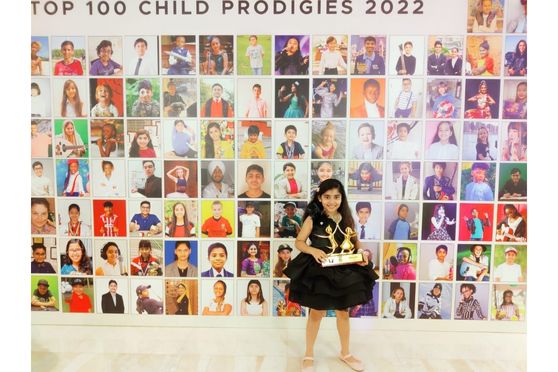 Abhijita Gupta has been recognised as the world's youngest writer by the International Book of Records Source: Abhijita Gupta

Advertisement
Summary
The young prodigy, Abhijita Gupta has recently been recognised as the world's youngest writer by the International Book of Records
The nine-year-old Abhijita is the granddaughter of poet duo Rashtrakavi- Shri Maithalisharan Gupt and Santkavi Shri Siyaramsharan Gupt

The young prodigy, Abhijita Gupta has been recognised as the world's youngest writer by the International Book of Records. She started writing poetry and prose at the age of five and first published at the age of 7. Currently a class four student.

The nine-year-old Abhijita is the granddaughter of poet duo Rashtrakavi- Shri Maithalisharan Gupt and Santkavi Shri Siyaramsharan Gupt. The young writer has been a source of inspiration for all aspiring writers as she has already penned three books “Happiness All Around", “We Will Surely Sustain” and “To Begin with…The Little Things”.

The Telegraph Online Edugraph recently got into a candid chat with the young writer to know more about her inspirations and what inclined her towards the field of writing at such a young age.

“I pay close attention to my surroundings. I might not have the precise words to express it right then. But as I begin writing, it is at that point that I give words to my sentiments. I guess you could say my surroundings greatly influence my writing” said Abhijita.

The little girl invokes her creative muse to create a vivid and unique portrait for distinct composition. She is also considered to be the first Indian kid to bag a four book deal, and hold 6 records for her writing skills. Some of her records includes:

1. 'Grandmaster of Writing' by the Asia Book of Records for her poetry and writing skills at such young age,

4. India book of records for being youngest author to write poetry and prose and

5. India book of records for being youngest to write a nonfiction book on pandemic.

“I felt fantastic, and believe me, the experience still feels surreal. At the same time, I've asked my parents numerous questions, including why children my age don't write and dismiss it as boring. Why does no one believe that children can write and write well? Why do young authors receive less attention than others? Because, in my opinion, every child has the ability to dream, and giving words to one's imagination is the act of writing. It's astounding…” says Abhijita about her recent accomplishment.

The talented Ghaziabad girl participated in “Azadi ka Amrit Mahotsav” which celebrated 75-years of India’s independence, and was honoured for her unparalleled works. Appreciating her contribution, the Ministry of Culture on behalf of the Government of India invited Abhijita to be amongst the 40 youth icons to be a part of the “Mauka Hai” song written by Manoj Muntashir, composed by Rochak Kohli and sung by B Praak. Abhijita studies in the prestigious Presidium School and has made her school and parents proud by winning the title of 'Grandmaster of Writing' by the Asia Book of Records, at such a young age, for her poetry and writing skills. Abhijita is a powerhouse who has hosted Mindwars state battle season 2 and represented U.P. state as a guest with Shruti Ulfat.

Oxford Bookstore witnessed the Digital launch of her third book, named “To Begin with…The Little Things”. The book was launched in October 2021 by Dr. Charu Wali Khanna, who is a Member of the National Commission for Women. According to the International Book of Records and World Book of Records UK, after this launch, Abhijita received a royalty worth Rs. 3 lakh, earning her a place in the book of records.

When not writing, the little writer can be found sketching, painting and selecting books at local bookstores. A big fan of Ruskin Bond, Abhijita aspires to continue the legacy of her great grandparents. Abhijita is also the lyricist of a song released on 2021’s Children’s Day. You can listen to the song here.

“My second-favourite pastime is reading, and like most kids my age, I also enjoy hanging out with friends, watching movies with my parents, and making memories with loved ones. I really enjoy my tennis lessons as well” adds Abhijita when speaking about her other interests.

More than 10,700 copies of her three books have already sold cumulatively across platforms.

Her three books, Happiness All Around, We Will Surely Sustain and “To Begin with…The Little Things” were released in November 2020, February 2021 and October 2021 respectively. All three books – published by Invincible Publishers - are collections of short stories and poems.

Famous from a very young age, Abhijita is a prime example of when you're doing something you love, you'll learn a lot more, achieve your goals, and become the best possible version of yourself.