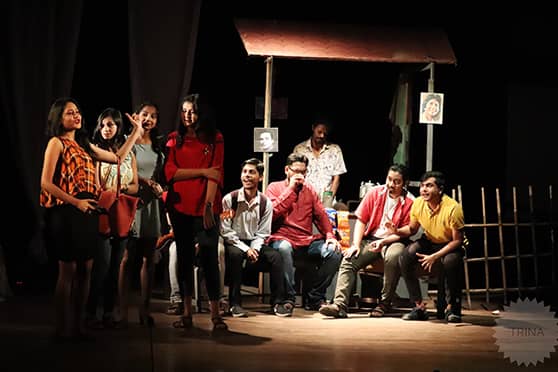 I returned to the auditorium to watch a theatre show after one and a half years and it was a moment I would remember for a very long time to come.

On September 24, masked and armed with hand sanitiser, I queued up outside the Gyan Manch auditorium to catch the first offline performance of Udbhab’s Natyokarer Mrityu.

Following Covid protocol, the auditorium was only half-filled. But what was unmissable in the scattered audience, despite the faces being masked up, was the joy and relief of being able to return to a favourite activity.

Getting back, after a long wait

“The last time I performed on stage was at Binodini Natyotsav, a theatre festival by the West Bengal government, in November 2019. In between, we tried to adapt to digital and audio plays but somewhere the emotion of performing in front of a live audience was missing,” said Shubhankar Karmakar, after the show. Shubhankar, a Microbiology graduate from Calcutta University, played the lead role in Natyokarer Mrityu, a modern adaptation of Luigi Pirandello’s play Six Characters in Search of an Author.

Udbhab, the five-year-old youth theatre group that staged Natyokarer Mrityu, put up another play at Gyan Manch that week, called Achhe Din Banchte Din. It was directed by Indrayudh Sarkar, a 2021 Computer Science graduate from Heritage Institute of Technology.

Over the last few weeks, several other groups stepped inside auditoriums with brand-new plays.

There was Ankur with Eka Ki?, directed by Subhadip Chakrabarti, an assistant teacher of Patha Bhavan, on September 25 at Gyan Manch. 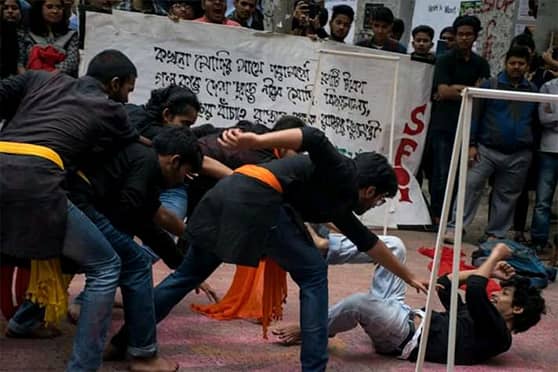 The show must go on, even if it’s virtual

Many theatre aficionados took to the virtual platform during the lockdown to keep their passion for theatre alive. Some tried to deal with the stress and anxiety by sharing videos on social media.

Somporko, a theatre group run by mostly school and college students, has been performing street plays for the last five years. During the pandemic, they came together to produce the virtual play, E Desh Tomar Noy. Directed by Jitaditya Chakraborty, a postgraduate student of Drama at Rabindra Bharati University, E Desh Tomar Noy was streamed on their Facebook page in January this year.

“It was really difficult to organise and execute such a show virtually. Co-ordinating rehearsals became a major issue. But we made it happen,” said Vishal Dahal, a first-year Journalism and Mass Communication student of Vijaygarh Jyotish Ray College, who performed in E Desh Tomar Noy. 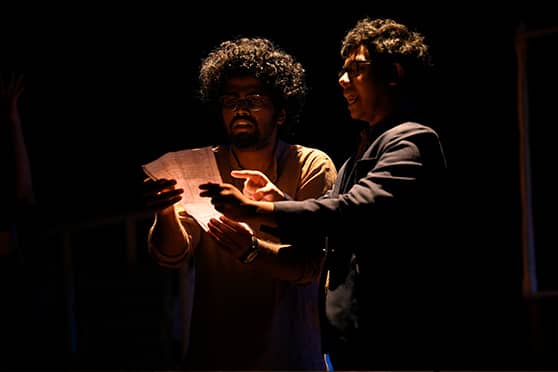 Preparing to get back on stage

Stuck at home, youngsters wrote scripts, produced music and developed scenography. Aratrick Bhadra, a first-year MA student of Journalism and Mass Communication at Jadavpur University who directed Natyokarer Mrityu, used the lockdown to develop the scenography and work on the details of the production.

“It was suffocating, as we were not able to perform on stage. This pandemic has shown us some alternatives to proscenium but there’s a strong attraction that we actors feel for the stage and cannot survive without it,” he said.

The pandemic made way for “quite a lot of free thinking” for Shubhayan Dey, a second-year Economics student of Presidency University. “While I was at home, I worked on how the music could blend in with the theatrics of the play,” said Shubhayan, who did the background score for Natyokarer Mrityu.

What youngsters have been struggling with is also being reflected in the plays they are performing. Like Ankur’s Eka Ki? focused on depression and the different aspects and crises of college life.

“We try to reach out to people with lucid and relatable stories. Continuing the rehearsals amidst the pandemic was quite difficult as we had to maintain Covid protocol. We are happy that the show was a success,” said Subhadip Chakrabarti, the director of Eka Ki?. 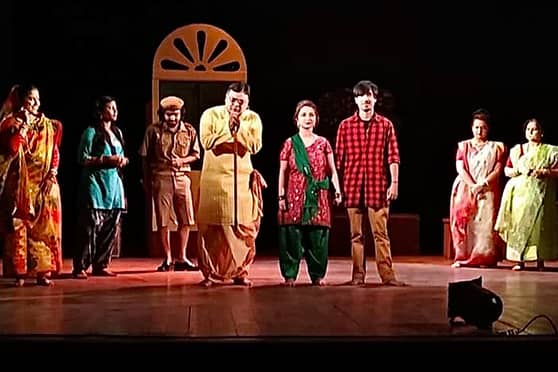 When the curtains went up

This was a moment that everyone had been waiting for – those on stage as well as those in the audience.

“Getting back on the stage after such a long time was indeed a relief. We have been rehearsing for the last three months. Our last few rehearsals were with the entire team to perfect the choreography,” said Priyanka Bairagi, a second-year History student of South Calcutta Girls’ College, who performed in Nabarupe Nabadurga.

Sayan Bhattacharya, a first-year Master’s in Bengali student of St. Xavier’s College found it difficult to get back in form after such a long gap. “I was out of practice. Getting back in shape was indeed a tough job in the beginning. We took more time than usual to master our parts,” said Sayan, who was part of the Eka Ki? production.