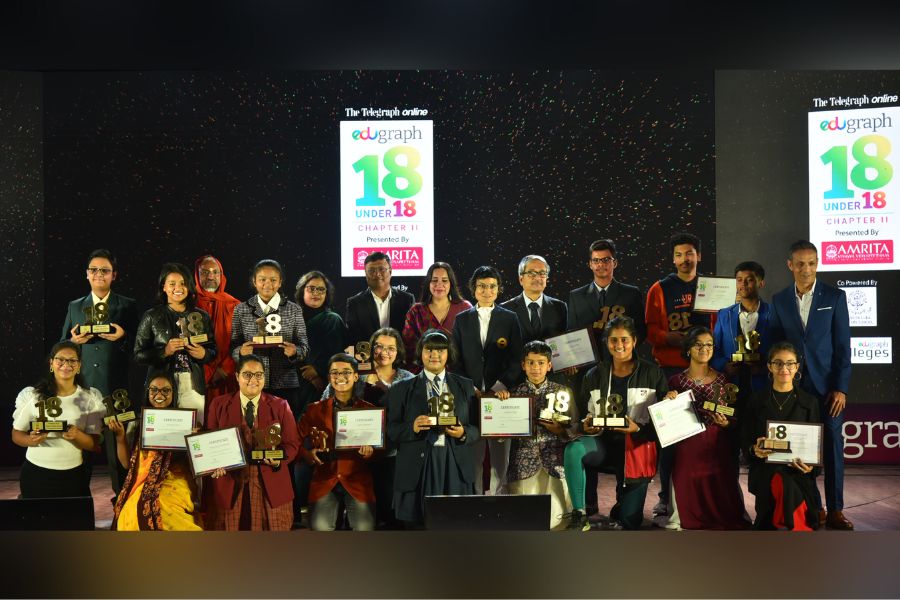 Advertisement
Summary
The event had as its chief guest Ms Piyali Basak, the first woman from India to scale Mt Everest without oxygen support
The Grand Finale saw stellar performances from participants as well as singer Anupam Roy, a guest and a jury member

The Telegraph Online Edugraph 18 under 18 Awards Chapter II, turned out to be a stellar night full of inspiring stories, beautiful performances by judges and participants, and of course, the recognition of the 18 young stars for this 2023 chapter.

Our 18 achievers for this year, handpicked by our 9 esteemed jury members, took to the stage at GD Birla Sabhaghar on 19January, at the Grand Finale that saw Piyali Basak as a Chief Guest.

Piyali, who has created history by becoming the first woman from India to scale Mt Everest without oxygen support, shared her inspiring story of overcoming astronomical odds, all in the single-minded pursuit of her dream.

Eastern India’s first-ever awards to felicitate 18 youngsters under the age of 18 is a unique initiative because it seeks to shift the spotlight from children’s academic achievements to their other activities and talents – to recognise their efforts and their dedication and encourage them to follow their dreams.

And now introducing our 18 winners:

Aditya Roy, a class 10 student of South Point High School. He is presently the captain of the Bengal U17 State Cricket Team since 2022.

Agniva Biswas, a class 9 student of Douglas Memorial Higher Secondary School. He is a Bharatnatyam Dancer and a Centre for Cultural Resources and Training Scholarship holder.

Anirban Roy, a class 7 student of Don Bosco School, Liluah, Howrah. He is a flautist and has been playing the flute since he was 4 years old.

Lahama Das Talukdar, a class 11 student of Berhampore Lipika Memorial Girls' High School. She is a talented singer who specialises in the Indian Classical (Dhrupad) style of music.

Antarjita Pal, a class 12 student of Harimati Devi Uchchatara Madhyamik Bohumukhi Balika Vidyalaya. She is an all-rounder with interests ranging from theatre and art to poetry and anchoring.

Mondrita Chatterjee, a class 12 student of Hill Top School, Jamshedpur. She is a social worker who is interested in the overall development of rural communities that lack basic amenities like hygiene, sanitation, housing, and schooling.

Mrittika Mallick, a class 9 student of Binodini Girls School. She is a chess player and with a rating of 1867, she secured third place in the Asian Youth Championships 2022 held in Bali, Indonesia.

Prajya Biswas, a class 9 student of Narayana School, Durgapur. She is a scientist and innovator and is already recognised as one of the Top 100 Influential Indians for her innovations.

Radhika Kejriwal, a class 8 student of Mahadevi Birla World Academy. She is a skater and she won three gold medals in the West Bengal Roller Skates Championship held in 2022.

Rajvi Purkayastha, a class 9 student of Delhi Public School, Guwahati. She is a violinist with an innate love for music, who has already released her first album containing instrumental tracks she has composed.

Shreyansh Vikas Mishra, a class 11 student of Sai International School, Bhubaneswar. He is an all-rounder with a keen interest in science and is passionate about playing badminton, football and cricket as well.

Shruti Majumdar, a class 6 student of The Future Foundation School. She is an artistic gymnast and a CCRT scholar, who also practices Kathak and plays the table.

Syndrela Das, a class 8 student of Kalyani Public School, Barasat. She is a table tennis player and currently an under-15 state champion in the sport.

Vaduguru Saiswaroop, a class 8 student of BDM International. He is a karateka who has already earned a black belt and aspires to represent India at the International level.

Arnav Daga, a class 10 student of Sri Sri Academy. He is a card stacker who already had several records to his name. He is currently working on building the largest playing card structure to make a place for himself in the Guinness Book of World Records.

Sohini Sanjay Mohanty, a class 9 student of KIIT International School, Bhubaneswar. She is a tennis player and was the first girl from Odisha to represent India in the finals of the U14 World Juniors Tennis Championship in The Czech Republic.

Arnav Sinha, a class 10 student of Motilal Nehru Public School, Jamshedpur. He is an innovator who created a hand-free sanitiser dispenser during the Covid-19 pandemic. He also won 1st position in Robotics Competition at the IRC School League at the State Level and went to Delhi for the Nationals in 2018.

Vidula Prakash Abhale, a class 10 student of J. H. Tarapore School, Jamshedpur. She is a rock climber who has won numerous accolades and certificates in Bouldering and Climbing both in India and internationally.

The winner of the Popular Choice Awards was Amandeep Kaur, a high jumper from DBMS English School, Jamshedpur, who was selected through a voting campaign run on the 18 under 18 website.

The 18 Under 18 Awards Chapter II is presented by Amrita Vishwa Vidyapeetham and co-powered by Vivekananda Mission School, Joka.