Take a ride back to childhood with these seven Christmas movies 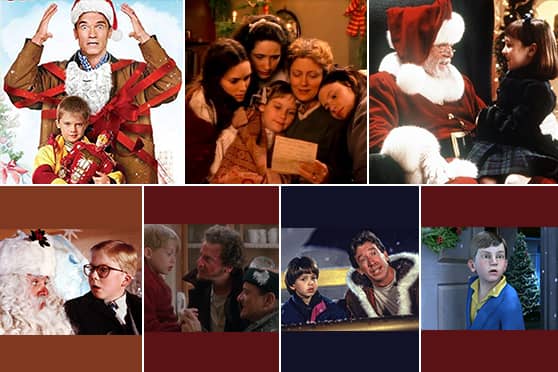 Advertisement
Summary
A list of movies that will keep you entertained this Christmas at home
Family drama to comedy, seven movies that have given us the festive feel from childhood

With festivities around the corner, it is time for a long movie marathon to get into the holiday mood. Grab yourself a mug of hot coffee and some popcorn and get under a warm blanket because here are seven feel-good movies on Christmas, that are not only heart-warming but are also nostalgic enough to give you a walk down memory lane.

A Warner Bros. film, released in 1990, is by far considered as one of the best Christmas movies of all time. The story revolves around an eight-year-old who was accidentally left alone at home, while his family left for a Christmas holiday in Paris.

As the story unfolds, we get to see how the boy, Kevin McCallister was initially elated to be in charge of the entire house. However, in later development when a few thieves try to break into his home in Chicago, Kevin gives them a good fight. Watch this comedy movie to know whether the thieves succeeded in their wicked plan or not?

The Polar Express by Robert Zemeckis

Released over two decades ago in 2004, The Polar Express is one the finest Christmas classic ever made. The fictional animated adventure film is an adaptation of a novel of the same title written by Chris Van Allsburg.

The Polar Express is a story about a young boy, who boards a mysterious train to the North Pole on Christmas eve. The train is set to take all the passengers, especially children, to the North Pole where they would visit Santa Claus who is making preparations for Christmas. However, on this mysterious and fantasy-filled journey, the boy meets a girl and several other characters and encounters some difficult circumstances. In addition to this, the film also gives us a good lesson about true friendship, bravery, and the spirit of festivity.

Miracle on 34th Street, a comedy-drama based on a story by Valentine Davies was filmed during the time of Christmas. This Christmas movie fits the bill for this holiday season. The story revolves around a six-year-old girl and her beliefs about Santa Claus. The young girl, Susan, along with help of a lawyer has to officially legitimise that a department storeman, acting as Santa, is the actual Santa Claus.

Although the 2019 version of the Little Women is more widely popularised, however, the 1994 version is by far one of the most promising and one of the best Christmas movies ever made. Shot in mostly snow-covered and cold locations, Little Women is for sure a holiday-spirited film.

The film is an adaptation of Louisa May Alcott’s two-volume novel, having the same title. The plot surrounds the story of March family, who have to deal with several issues, starting from financial crisis to failed love life. The film begins and wraps up at Christmas in different years. With perfect music and screenplay, Little Women is a combination of friendship, family, togetherness, and celebrations.

Jingle All The Way by Brian Levant

An American Christmas comedy, Jingle All The Way narrates the story of a father who is in desperate need of a Christmas gift for his son. On Christmas eve, he is seen trying his best to buy a Turbo Man action figure. All the stores were out of them, and he has to travel all over town and compete with everybody else in order to find one.

The Santa Clause by John Pasquin

Another American comedy-drama, The Santa Clause is the first film of the series. The film shows how a common man had to become a Santa Claus, unknowingly, due to some unfortunate circumstances. However, when he agreed to deliver the gifts, he was asked to keep his secret and not reveal his identity at any cost to anyone.

A Christmas Story by Bob Clark

The 1983 comedy film narrates a story about how a nine-year-old kid desperately wants a ‘Red Ryder Carbine Action 200-shot Range Model air rifle’ as his Christmas present. As the plot develops, Christmas arrived and the boy Ralphie Parker, received plenty of gifts. However, none of the presents made him happy as all he wanted for Christmas was a Red Ryder BB Gun. Among all the gifts he had received, there was one box which he had opened at last. Was it the Red Ryder B.B. Gun? Give this movie a watch this holiday season to find out what happened.