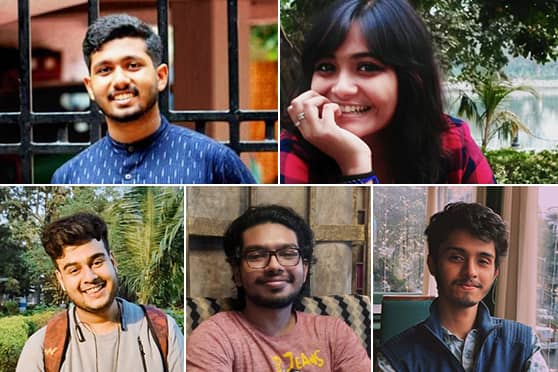 The New Year has been tough for students. Forced to return to online classes amid a surge in COVID cases, many are tackling the virus themselves or taking care of affected family members alongside preparing for exams.

Amid the unparalleled rise in COVID cases, students have had to strike a balance between looking after their families and studying for their upcoming exams. “I spent the first two years of my college life in a different city working incredibly hard to try and build a creative space for myself there. Then it was gone in a snap and I was catapulted back to my hometown. Now I am stuck between a saga of incomplete frustrations ― be it the space and people from my almost ending college life in Bangalore or my family testing positive once again here in Kolkata. I feel myself ricocheting between parallel worlds, be it the demanding academics of a final-year college student, or that of a son and brother taking care of his closest ones during such tough times,” said Arpit Bhattacharya, a fourth-year Fashion Communication student at NIFT Bangalore.

The terrifying yet familiar feeling

While the third wave of COVID necessitates urgent protective measures, one cannot ignore how damaging it is to have to repeatedly close campuses and leave students to learn from their homes, robbing them of the essential social dimension that enriches the learning process. “We did see it coming but were not quite prepared. Now it feels as if our worst fears have come true. Even on the last day of college before the winter break, I did not think that it would probably be the last time I met friends and teachers for a while. I was just beginning to get used to the new normal routine once more, only for it to be suspended again. The dreadful, yet familiar, feeling of being locked indoors has crawled its way back into our lives. It makes one feel a bit helpless. It is quite unsettling even though I had become used to the dreariness of online education for about a year and a half,” said Harsha Roy, a second-year law student at Calcutta University.

The shift to the online medium has also hit students who were able to regain their confidence and concentration skills through the brief period of offline classes. “It feels like a prolonged deja vu at this point. We know that a lockdown is the most necessary course of action at this point but it feels so emotionally draining to again lock myself in the house for days to come, with no idea when all of this is going to end. Moreover, after the taste of offline classes and how much it boosted my learning capabilities and concentration levels, being forced to sit in front of a screen all day long is proving hard to cope with,” said Dayita Samanta, a second-year English student at Loreto College.

The slow but consistent erosion of secondary and higher education is felt by students across the spectrum. “Teachers and students both understand that the online mode fails to capture the essence of learning. There are a large number of students on the wrong side of the digital divide. They had some hope of catching up on what they missed when campuses were re-opening up but once again are left behind. Throughout the pandemic, the entire educational process seems to have acquired an unrealistic quality, something entirely detached from the past, our housebound present and the unsettling future,” said Songborto Biswas, a second-year English student at Scottish Church College.

Despite the overwhelming challenges, most students are adapting to and navigating the circumstances remarkably well. They are juggling academic as well as personal stress. “Today is a far cry from what we hoped for and expected from 2022. It is heart-breaking to have to be away from the ones you love. I keep myself busy throughout the day, listening to music, working on projects, keeping in touch with the people who matter. What wouldn’t any of us give for our lives going back to being the way they were? All we can do is take each day as it comes and remember that there is, there has to be, light at the end of the tunnel,” said Swapnil Sengupta, a third-year Electrical Engineering student at Jadavpur University.

International Day of Education 2022: Skills that students picked up in the pandemic

University of Sheffield scholarships for international students from developing count. . .