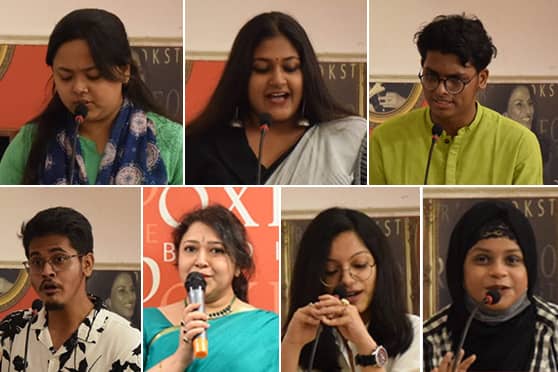 Santapan Saha, a second-year BTech in Biotechnology student of Heritage Institute of Technology, Kolkata, was the winning storyteller while Hreesav Bhattacharjee, a third-year BCom-LLB student of St. Xavier’s University, Kolkata, bagged the first prize for poetry.

Over 15 participants narrated and recited their pieces in English and Bengali. Edugraph caught up with some of the performers.

I recited an original Bengali poem, Manush. It’s about the deeds of humans. In was in Class XI when I discovered my love for writing. I run a YouTube channel called HREEE_AL, where I rap and recite poems and rap. I want to pursue performing arts. I am studying law as a backup career option. I do regular gigs and perform online, too.

I performed a Bengali poem written by me called Nobboi Shotoker Bhalobasha. It’s about love in the 90s — stares and eye contact, unspoken emotions, and waiting for hours to catch a glimpse of your beloved. It was an age when there were no smartphones, just data recharge and SMS packs. I tried elaborating on this, taking the audience on this journey through my poem. I have been writing poems in English, Hindi, Punjabi and Bengali since two years. The lockdown gave me time to find myself and my potential.

I recited Africa by Rabindranath Tagore. My mother used to take me to recitation classes in our neighbourhood. Gradually, I started taking interest and liking it. I quit the classes before academic pressure but continued to read and recite. During the lockdown, I started writing in Bengali.

I narrated an original story written by me. It’s about taking a chance if you feel a connection with someone. I write since Class V and have a website (www.nomadscholastic.com). I regularly publish my writings. The pandemic gave me time to focus on myself.

I translated Before the Law by Franz Kafka into Bengali and narrated it. When I heard that I would have to narrate a story in four minutes, Tagore came to my mind first. But then I thought that most people might narrate his works. I wanted to do something different so I chose a short story from the collection. I have been writing original Bengali compositions since Class XI and have been reciting since Class VI.

I wrote a story with my grandfather as the protagonist. It’s about love. When our dear ones travel to some unknown world, we mourn their absence. It’s not about mourning but feeling that this love can be metaphysical. I have been writing stories in English for the last three years. The pandemic opened my eyes. Ruskin Bond and Sudha Murthy have influenced me.

I performed a piece written by me. It was about how a person with ADHD (Attention Deficit Hyperactivity Disorder) suffers in love. It’s called If You Fall in Love with Me, Don’t. I have ADHD and was misdiagnosed for many years. You face a lot of problems while making friends, especially when you are in a relationship with your partners. I wrote the piece so that my fellow ADHDers can relate to it.

I recited a self-composed Bengali story, Jatra. It’s about women getting detached from their families when they marry. More than you miss the members of the family, you kind of miss the memories you made with them. It’s been about four years that I have been writing. It initially started off as bedtime diary writing and then developed into a hobby. I am a Hindustani classical singer, trained for 16 years. Music helps when you are overcome with emotions. But there are times, when even music doesn’t help. That is when writing helps.

The protagonist in my story dreams about his book not doing well and then gets to know that his book was actually doing very well. I started writing when I was in Class IX. Incidents from my life that stand out in my personal observations are what I usually pen down. I was very nervous but thankfully I got to watch some of the other participants perform, which gave me the courage to perform.

Minister of State for Education stresses on NEP that envisions Education system roote. . .

The Edugraph 18 Under 18 Awards Chapter II recognised these 18 young achievers from E. . .