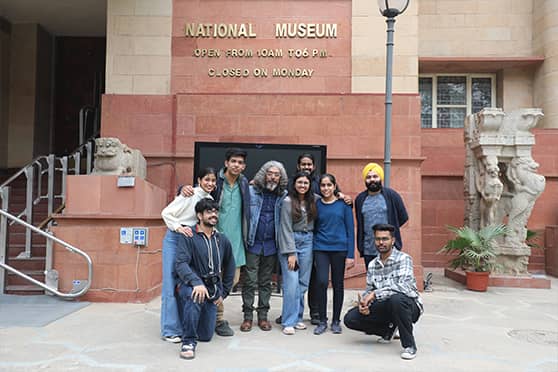 Advertisement
Summary
From innovative hologram projections to interactive gesture flipbooks experience, the students used new-age technology to narrate stories of the past
Two faculty members guided the students on the project

Gone are the days when you would walk into a museum and see rows and rows of artefacts on display. With digital and technical advancement, one can now get information on artefacts digitally and also make innovative use of sensory organs to know more about exhibits.

Seven students of the Communication Design department of the Indian Institute of Art and Design (IIAD), New Delhi, sparked new life into the exhibits at National Museum in Delhi with a series of technical upgrades.

“When Tricolor India Pvt Ltd approached us with the project, I decided to discuss it with the students. When I was in college (National Institute of Design, Ahmedabad), we were exposed to a lot of live projects and the experience of working alongside the faculty was very enriching. The advantage of a live classroom project is that your teacher becomes the head designer who understands the needs and the demands of the client and the industry. He provides vision and at the same time if things are not up to the mark, guides you to produce industry-standard output. The experience enriches the students as real work is part of their portfolio, leaving them far more confident,” said Shaaz Ahmed.

Museums are working towards creating interactive and immersive digital facilities that go beyond simple exhibitions, by using technologies such as virtual reality, augmented reality, projection mapping, and other digital interventions.

The project involving the National Museum aims to bring about change by designing digital installations, displays, and information distribution systems that engage and interest the visitors. The seven-member team was assigned three halls of the museum — Central Asian Antiquities, Company Paintings, Buddha Gallery and the Museum Reception — to work on.

Some of the innovative upgrades to look out for include National Museum Tour Application, multi-touch walls, holograms, interactive pond, flipbook, and rotoscope.

The National Museum Tour Application is designed to allow visitors to visit all the halls and masterpieces while accessing the details and location using a map and itinerary on their phone.

Flipbooks are digital books that are manoeuvred by hand gestures. 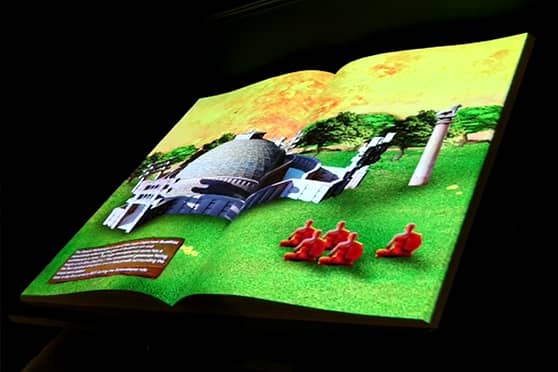 Holograms are digital life-like projections with information in text or images while multi-touch walls are touch-screen interactive video walls. 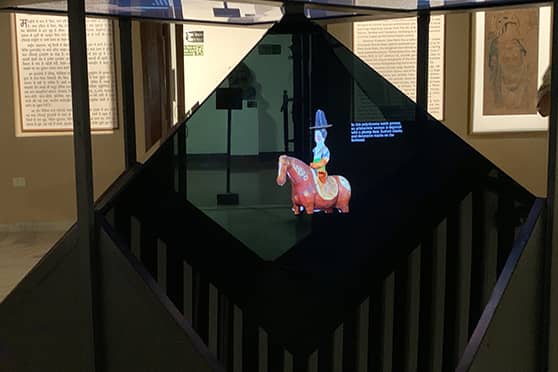 Hologram created by the students of IIAD. Source: IIAD

The interactive pond is an artificially programmed pond that disseminates information while creating the ambiance of a real pond. Rotoscopes are touch and interactive animations for motion pictures on digital stands. 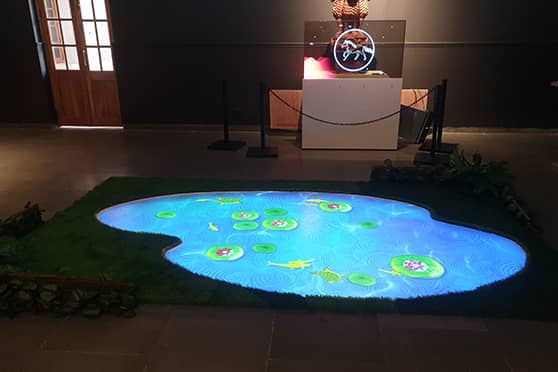 Interactive pond created by the students of IIAD. Source: IIAD

I worked on animation and character design for eight films based on the life of Buddha displayed on the rotoscope in the Buddha Gallery and characters for circular projection in the Central Asian Antiquities Gallery. These are digital projections in circular spaces. In the films on Buddha, we drew references from existing Buddha sculptures from the museum as well as Ajanta paintings. But finding the right balance between the references and a visually good-looking character for the audience was the biggest challenge. Finalising how the faces were going to look, the jewellery and clothing took some time but the process became easier after two-three initial characters were wrapped up. Working on this project made me realise the importance of team work. By receiving and giving feedback at every stage of work, we were able to correct our mistakes and get new perspectives on things, which in the end resulted in a higher quality outcome. — Sreeram Jayaram, a third-year student

I worked on the projection at the museum’s reception with other teammates — a 270-degree projection of Raagmala, a map for the multi-touch table, an interactive pond and a flipbook in the Buddha Gallery. The aim was to create a calming space for the visitors and hence the projection of an interactive pond on the ground. I took inspiration for the elements from the paintings of the Pala period. As visitors engage with this projection, ripples similar to those seen in a real pond will form, giving the impression that you are walking on water. For the flipbook, we used a simplistic gesture-based technology that allows visitors to turn pages by waving their hands. The brief for the 270-degree project was to present the Raagmala paintings uniquely. At different times of the day, different ragas were sung and the king would commission the painter to paint the complete scene. The idea was to use the method of immersive storytelling via projection mapping with sound, animation, video, and images. — Shreya Bhardwaj, a fourth-year student

Rotoscope is a technology that uses a canvas and a moveable screen. The screen above the canvas recognises the graphics behind it and triggers animation and user interfaces. Rotoscope is being used as a medium of storytelling where users can interact with the artwork and learn about the eight major life events of Buddha in the form of animated films. It makes it easy for users to understand the life of Buddha in the form of visuals rather than heavy text. I researched all the eight life events of Buddha, Sarnath Pillar, and how it represents different aspects of Buddhism and how Buddhism spread from India to different parts of Asia. Most of the information and resources were provided by the curators of the gallery. The resources helped in understanding the context and in designing things accordingly. I learned how to interact with clients and collaborate with people from multiple disciplines to bring an idea to life while making it functional and aesthetically pleasing. This opened my mind because till now I was used to working with designers and most of the projects in college end in a high-fidelity prototype stage. Here, I saw the product developing from the designing stage to the assembling stage and then testing and refinements. — Deepak Gupta, a fourth-year student

I worked on the user interface of the multi-touch table and several digital projections. A visitor-centric approach was needed. The goal was to understand the needs of customers and their wishes based on the information provided. While working on the projects it was necessary to understand what has already been done and the different types of technologies that we can use in the museum. While working on the character projection, I researched the Bezeklik paintings (of China) to understand their visual language while creating the actual characters. Understanding the nationwide target audience and creating something according to their needs has been challenging. I have learned to be persistent during the process of design. — Janvi Khera, a fourth-year student

The National Museum Tour Application is designed to allow visitors to access all the halls and masterpieces in the museum on their phones. The app can be downloaded by scanning QR codes present on the multi-touch walls. The multi-touch walls were to replace kiosks disseminating information on the museum. While being informative, we had to be engaging and attractive as well. This was done with the use of text, maps and images on the halls and masterpieces. The design was meant to be modern and aesthetic, while the visual language itself was derived from the forms and colours of the peacock, our national bird. My primary source of information was the artefacts themselves, which gave me a sense of their lifestyle, aesthetics, symbolism, and religion. This research helped me to finally come up with the imagery for the hologram. I learned how to communicate and work with teams and often collaborated with designers, businessmen, coders and government officials. — Risaal Shaan Sabbir, a fourth-year student

I contributed as a visual designer for the project creating intricate designs developed from basic text and narrative content shared with us. I developed the interactive corner, augmented reality recognition photo booth, Ramayana painting story boards for 270-degree mapping, projections, signages and instructional panel, and user interface for backend display controller on iPad for the App. This project aims to create a mutual relationship between technology and museums. It helped explore how leading cultural institutions around the globe are using innovative digital solutions in order to heighten the visitor experience and how the same could be incorporated based on the folklore and heritage of India. — Aishwarya Shyam Kumar, a fourth-year student

I worked on hologram animations, transparent OLED animations, storyboards for 270-degree Ramayana projection, the film on spread of Buddhism, interactive pond projection in the Buddha Gallery and the flora-fauna projection in the Company Paintings Gallery. My work ranged from animating paintings of plants, birds and animals to moving visuals for a transparent display. I played a lot with lines and geometry. It helps to look at something with fresh eyes and stepping away to work with a different context is refreshing to the mind. This also translates into my biggest learning from the project. This project taught me to appreciate the depth and value Indian history has to offer to curious minds across the country. — Nikhil Shankar, a fourth-year student.