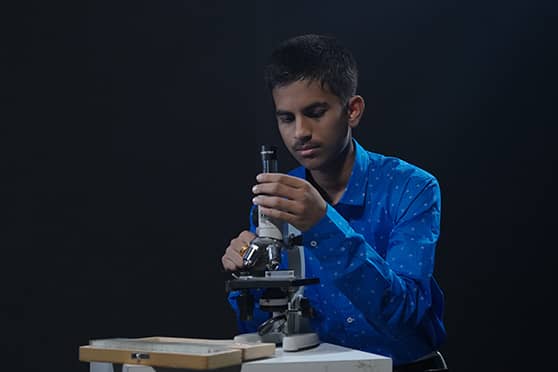 As a child, Avigyan Kishor Das was always curious about how toys worked. The moment his father got him a new toy, little Avigyan would open it up and try to figure out its mechanism.

The Class X student of Hooghly Collegiate School was recognised as an innovator by the West Bengal State Council of Science and Technology, government of West Bengal in 2021 and featured in NITI Aayog’s Atal Innovation Mission (AIM) in 2019.

The Edugraph 18 Under 18 Award winner already has a patent and has applied for two more.

“From a very young age, I was intrigued by technology and how machines worked. I was curious to know about moving toys and so I used to open the toys my father gave me to understand their mechanism,” Avigyan said.

The young innovator was spotted in his school when he made a model of Heron’s Fountain (a hydraulic machine invented by the 1st century AD inventor, mathematician and physicist Heron of Alexandria in Class VI. “Every Saraswati Puja, the school hosts a science fair. Watching my seniors display their models and ideas, I wanted to do the same. In Class VI, I participated in the fair for the first time with a model of Heron’s Fountain. I came fourth in the competition. I was inspired to try out new ideas,” he said.

One of Avigyan’s innovations — a touch-free, portable and affordable sanitising system called Touch Free Auto Hand Sanitiser — has fetched him a patent from the West Bengal government, while two more are being considered for patents.

Another of Avigyan’s innovations, SAVE (Safety and Alert to Vulnerable Emergency), is aimed at ensuring safety of rail passengers should anything happen to the driver.

Inspired by Rabindranath Tagore’s Juto Abishkar, Avigyan’s third innovation works on the principle of reducing automobile waste and pollution to zero per cent. “I thought if we can attach a sensor in the exhaust pipe, the primary source of vehicular emission, the pollution will be reduced,” said the 15-year-old. 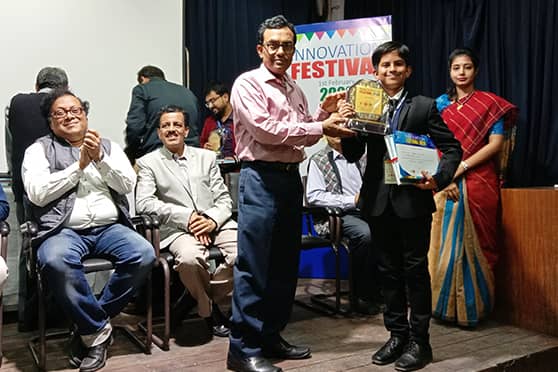 Avigyan has participated in several national and international competitions and demonstrated his models.

“I presented the idea of pollution control through reduction of automobile emission during the India International Science Festival in 2019. In 2021, I participated in the Young Earth Champion Contest organised by Sony BBC Earth. It was an all-India platform to display innovations in eco-friendly sustainable models. Here, too, I presented my pollution control system and it earned me the Mega Winner award,” said the student of Hooghly Collegiate School.

Avigyan has faced his share of challenges, too, but he is not one to give up. “It took me a long time to figure out the mechanism of the sanitising system. It was during the lockdown and I used only household items. There was a leakage issue during the initial phase. I also faced issues with the battery and circuit connection. It took me around three to four months to get it right. I started working on it in April 2021 and managed to perfect it around July-August 2021. Despite the challenges, I continued my work because my target was to do something for the society. The doctors and health workers were doing their best and it inspired me to strive ahead,” he said.

The most recent jewel in Avigyan’s crown is a certificate for Sushruta of Modern India, a docudrama on the life of Pandit Madhusudan Gupta which was screened at Chitra Bharati Film Festival 2022 in Bhopal. 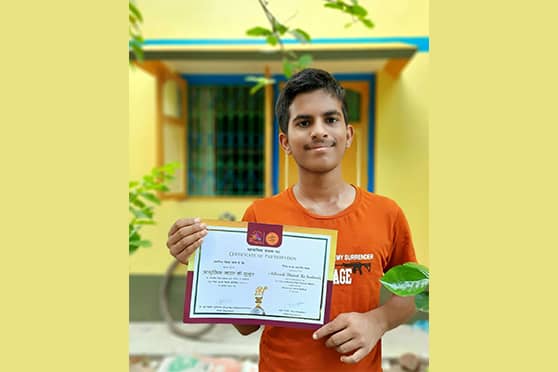 Avigyan’s hero is Satyendra Nath Bose, mathematician and physicist. “Bose had once said that those who say science is not possible in Bengal either do not know Bengali or else they don’t understand science. I study in a Bengali-medium school and feel if you can conquer any subject in your mother tongue, then there is nothing better than that,” he said.

The Class X boy firmly believes that innovation should be aimed at solving problems faced by society. “Being an innovator, my target is to create minimum financial burden on people and yet provide them with the best solutions for their problems. Also, most people do not like using anything complex. So, I try to think of simple mechanisms,” he said.

The Edugraph 18 Under 18 Award

The Edugraph 18 Under 18 award brought much happiness. “I am very happy that I have been honoured on such a big platform. This award recognises everything that I have done till date, so it will help me move ahead in life,” Avigyan said.