Higher Studies in Canada: What I love about University of Alberta’s North campus 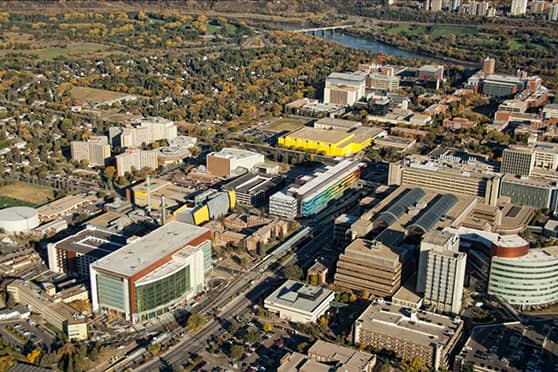 The culture shock of moving from higher education in India – which employs a more formal and traditional learning and teaching culture – to that of Canada may take one some time to get used to. However, the three years that I spent in Canada studying for my master’s in Political Science at the University of Alberta was a very enlightening and exciting experience, despite the latter half being shadowed by the Covid-19 pandemic.

The facilities were plentiful, there were ample opportunities to meet and socialise with peers, and the ability to conduct my own research alongside my courses made for a truly rewarding higher education experience.

Nestled in the idyllic bend of the North Saskatchewan River that cuts through the city of Edmonton, the University of Alberta’s North campus (which also doubles as its main campus) finds itself enjoying the dual benefits of being a central city campus that’s also in close proximity to a sprawling river valley ecosystem.

The North campus is one of the five University of Alberta campuses in the province of Alberta. It constitutes an extended neighbourhood of buildings, including classroom and faculty buildings, lecture halls, libraries, administrative buildings and laboratories.

The extended campus area further includes the education centres, shopping centres, student hangout hubs and the University of Alberta hospital, adjacent to which medical students have their day-to-day classes.

Here are four of my favourite things about the North campus of University of Alberta:

The North Saskatchewan River is nearby

As an international graduate student from India, the campus life I was able to experience was very different from that of my undergraduate education at St. Xavier’s College in Kolkata. For starters, it was a novel change to be on a campus located so close to a river valley and enjoy the beautiful sights of the North Saskatchewan River. As a Political Science student, my department building was the northern-most on campus and thus closest to the river. The campus itself is particularly beautiful with big open green spaces breaking the monotony of sprawling buildings. The very pleasant Canadian weather during the summer months makes it an idyllic setting to sit outside and read books, work, study or just enjoy some food and conversation with friends.

Using tunnels and passageways in the harsh winter

Winters in Edmonton can be particularly harsh; it is one of the northern-most metropolitan cities in Canada. Temperatures plunge to sub-zero by November and it usually drops to -20 degrees Celsius or even lower in the following months, leaving the city and the campus covered in thick layers of snow. Walking around the campus during these months can be a little daunting without appropriate clothing and shoes. However, like most Canadian universities that have to deal with heavy snowfall, the University of Alberta has a number of above-ground and underground tunnels and passageways linking different buildings to one another, such that one can go from the south to the north of campus without stepping out in the cold.

I was also particularly impressed by the use of the Rutherford Library on the campus, which is one of the several libraries at the University of Alberta and boasts the second largest collection of any academic library in Canada. The library has several spots to sit down and study, work on assignments or just read for leisure. However, without a doubt, one of the best spaces to study would be the ‘Harry Potter room’ – a vast and sprawling room which serves as a ‘silent study space’ and whose interior resembles the grand hall from the Harry Potter franchise with table after table and massive shelves lining its walls!

Outside of study spaces and libraries, the University also has a number of buildings which have food courts and different shops selling food, beverages and stationery. North Americans enjoy a particularly strong coffee culture, thus on days when I had classes in the morning, it would be very common to see long lines at the various coffee places across campus. The university also has its own gym and its very own ice-skating rink where the university team competes in ice hockey matches, one of which I was able to attend with friends. 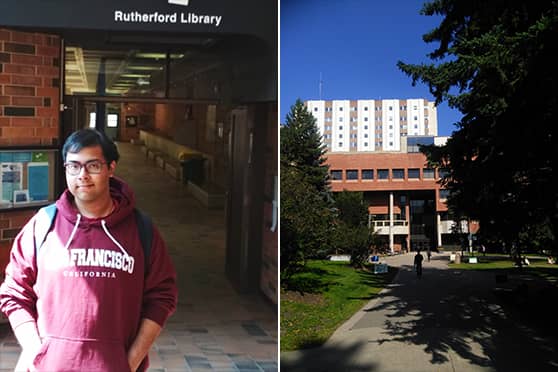 Sagnik (left); Tory Building on the northern end of the campus. Source: Sagnik

Perhaps one of the most exciting aspects of my campus life and the area where I spent most of my time was at the office spaces assigned to graduate students. Here, we were able to claim our own desk and a small workspace for ourselves. It would be where I would leave my books, work on most of my assignments and spend time with my friends in the department who had their own desks and spaces around me.

This was a particularly important space for me since having your own workspace and being able to interact with your peers provided a beneficial space for socialisation. It also highlighted the nature of how a graduate degree at the university represented a work-study programme in many ways. It was also the place where I would grade assignments as part of my Teaching Assistantship for which I would have to assist professors with grading papers for undergraduate courses, design student workshops and meet with students regarding their grades if necessary.

(Sagnik Guha is a postgraduate in Political Science from the University of Alberta, Canada)

LawSikho teams up with Texas A&M University School of Law