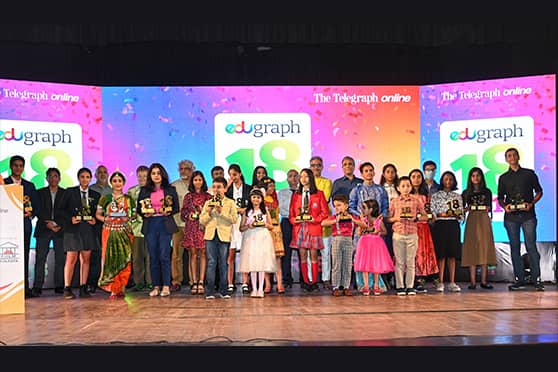 The winners of the 18 Under 18 Awards with the jury members at GD Birla Sabhagar on March 22. Photo: Amit Datta

Two hundred schools, around a thousand participants and a star-studded nine-member jury made the first edition of Edugraph 18 Under 18 a unique platform for young talents from eastern India to rise and shine.

The 18 young achievers — picked by the nine-member jury — were felicitated at a grand finale at GD Birla Sabhagar on March 22, along with six students below the age of 10.

Rohit Kapoor, CEO, India & South East Asia, OYO, was the guest of honour for the evening. The Calcutta boy’s advice for the winners was simple: "Don't take the award to your head if you win or to your heart if you lose. Take it as a motivation and work harder towards your goals,” Kapoor said. “The only thing I have is the willingness to learn from everyone.”

A first-of-its-kind initiative, Edugraph 18 Under 18 — from The Telegraph Online — aims at recognising young achievers under the age of 18 from Eastern India. The judges chose 18 achievers from the top 50 finalists after a round of one-to-one online interviews. 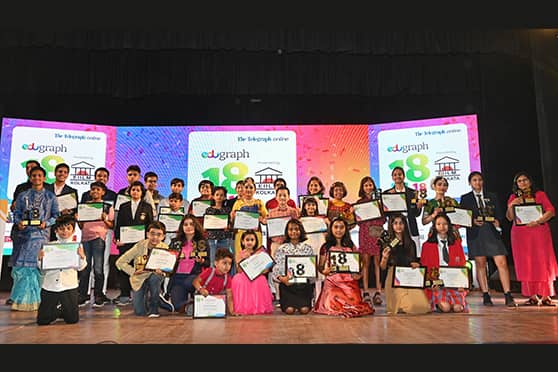 The finalists of the 18 Under 18 Awards pose for a group picture. Photo: Amit Datta

Aleena Farid, a Class VIII student of Pratt Memorial School, Kolkata, is a tennis player and ranked No. 2 in the Under 14 Girls’ Singles in 2021.

Anandini Sengupta, a Class VIII student of Modern High School for Girls, Kolkata, is a poet and a short story writer.

Anushri Modi, a Class XII student of La Martiniere for Girls, Kolkata, is a swimmer who won bronze at the GCM Inter-club Swimming Championship in Malaysia and the Olimpiade Olahraga Renang Nasional Open Tournament in Indonesia.

Divyani Mohanty, a Class XI student of South Point High School, Kolkata, is an Odissi dancer. She won the National Nritya Pratibha Award Plaque of Honour at the International Dance and Music Festival 8th and 10th Cuttack Mahotsav in 2017 and 2019.

Khwaish Sharma, a Class X student of The Newtown School, Kolkata, is an air weapon shooter. She has won around 27 gold, 8 silver and 10 bronze medals in various national and state-level tournaments.

Likuta Persis Tissicca, a Class IX student of Hollotoli School, Nagaland, has won gold in several championships like the Under-41 kg category at the 12th National Taekwondo Championship 2021.

Nikum Gyamar, a Class XI student of Witty International School, Maharashtra, is a footballer. He is part of Rajasthan United FC, which played in the I-League Qualifiers 2021 and was crowned champions.

Pranav Ashar, a Class XII student of Lakshmipat Singhania Academy, Kolkata, has been the vice-president of marketing at the International Space Settlement Design Competition. He conducts workshops and simulations for Model United Nations (MUN).

Ram Daftari, a Class X student of Birla High School, Kolkata, won first prize in the German Quiz Competition at the Namaste Europe 2020 fest and also in the Jarr Your Brilliance Quiz League 2020.

Rwitabina Gupta Bhaya, a Class X student of The Newtown School, Kolkata, is an artist whose creative illustrations have been used in animation films for ECCE programmes by the West Bengal government.

Shraddha Oraon, a Class IX student of Techno India Group Public School, Falakata, is a folk singer who performs in genres like Bhawaiya and Rajbanshi Kirtan.

Paridhi Das, a Class UKG student of DAV Model School, IIT Kharagpur, got an All Rounder National Rank 3 in the National All Rounder Championship in May-July 2021.

Shanaya Singh, a Class II student of Mahadevi Birla World Academy, Kolkata, is a storyteller. She was chosen Young Speaker of The Year at the Dr. APJ Abdul Kalam Education Excellence Awards 2021.

The 18 Under 18 Awards is presented by the Eastern Institute for Integrated Learning in Management (EIILM) Kolkata, powered by the International Institute of Hotel Management (IIHM) and co-powered by Vivekananda Mission School, Joka. It is also supported by Life Insurance Council as associate sponsor, Maulana Abul Kalam Azad University of Technology (MAKAUT) as knowledge partner, Wow China as food partner, PEEDEE World as outdoor partner and Bodyline Sports as fitness partner.