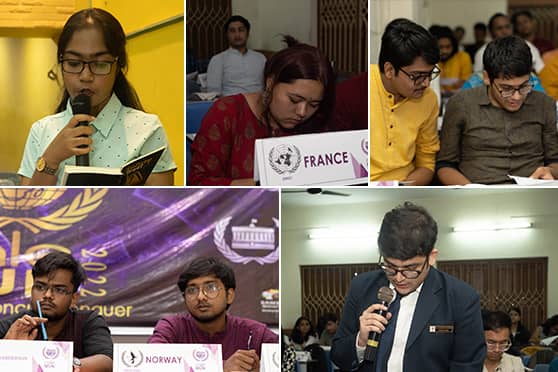 MUNners from different institutes got together to engage in dialogues and discussions and share perceptions about global change at CaleMUN 2022 hosted by Scottish Church College on May 6 and 7.

Shantanu Chakraborty, professor of History at the University of Calcutta and the special guest at the event, addressed the students on international policy changes in India vis a vis Eastern European Countries like Poland.

“CaleMUN was aimed at bringing diplomacy to the centre stage yet again,” said Rohit Das, a third-year Chemistry student and head, logistics and academics, CaleMUN 2022.

“I represented Democratic People’s Republic of Korea (North Korea). Initially, I went through the official UN documents about the agenda at hand, then read about my allotted country’s official policy. Post pandemic, the Kolkata MUN Circuit has brought a lot of new dimensions in research and a lot of new faces, making the MUN scene far more interesting. MUNs are far more engaging when held offline,” said Agnitra.

United Nations Security Council: The Ukraine-Russia war turned the attention of the world not only towards the two nations but also towards the question of security, member-nation ties and the refugee crisis. This committee discussed the war and its consequences.

“I started out with thorough research on the Uniform Civil Code and the legal, political and constitutional hurdles to its implementation. MUNs are all about research, oration, diplomacy and most importantly presence of mind. Apart from public speaking, MUNs teach one to raise proper questions, write speeches quickly and come up with intelligent arguments spontaneously. Based on my research, I came up with a strategy to implement an All India Uniform Civil Code. This was a bit off field for me, being an MBBS student, even though I have always loved political debates,” said Anwesha.