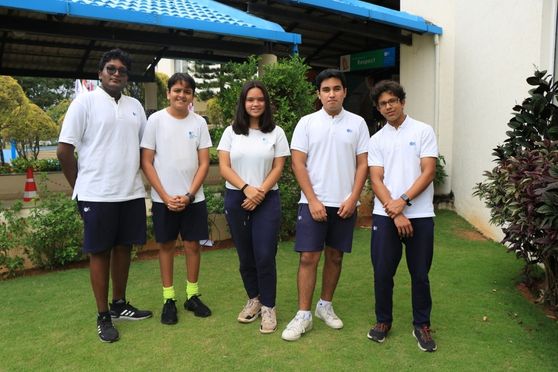 The high school students of the Canadian International School (CIS), Bangalore, performed exceptionally at the regional round of the World Scholar's Cup academic competition held earlier this year. After shining bright at the Bangalore round, the CIS team qualified for the global round held in Dubai recently, where they competed against 3,000 scholars from over 50 countries. Now the CIS school teams qualify to compete at the annual Tournament of Champions to be held at Yale University in the USA in November 2022.

The Regional rounds of the World Scholar's Cup take place worldwide throughout the year. This year, The World Scholars' Cup - Bangalore’s round featured two teams from CIS. In the Senior division, Rajat, Arjun, Zayaan, Ronojoy, Niranjan, and Kovid won 38 individual gold and silver medals in various categories. The CIS students also secured the team writing trophy and the team debate gold medal, competing with over 60 teams from schools across India.

At the regional round, the CIS scholars participated in four events: Team Debate, Scholar's Bowl, Scholar’s Challenge, and Collaborative Writing. The questions and the content were based on six subjects - Science and Technology, Art and Music, Literature and Media, Social Studies, and History. This year, the 6th subject was the Psychology of Mistakes.

Ronojoy, 11th grade student of CIS and a member of CIS team admitted that the curriculum of the event and the tasks were challenging and encouraged “out-of-the box” thinking. “It does not resemble a conventional exam. You have to use your critical thinking, it tests your ability to think on the spot and connect the randomized topics to each other,” he said.

“For example, in the art and music section, there was a very famous painting that was part of the syllabus. And the question was - if a particular state leader in 1600 made this painting, what would it look like or how would it change?” added Niranjan, 11th Grade student and CIS team member.

“Your performance determines how many points you get,”- explains Zayaan, a member of the team. “You are ranked based on the number of points, and if they exceed the threshold of 20,000, the team qualifies for the final Tournament of Champions. And the competition was incredibly high.”

Speaking about the students’ accomplishments, Ms. Shweta Sastri, Managing Director, Canadian International School, Bangalore, said: “All CIS community is proud of our students for their stupendous achievements in the initial rounds. We also commend them for their brilliance and commitment and are sure that they will achieve a great deal more as they head into the future. We also believe that this feat by our students will also inspire other students to actively participate in many such global competitions."

The CIS team is preparing for the Tournament of Champions, which is two months from now. It is more than just another Global Round. The learners will immerse into Yale University life and take a chance to understand what it is like to be a student at one of the world’s most outstanding universities. They will interact directly with the Yale community and have fun with people from different cultures – talking, debating, and even dancing. They will also learn how to leverage the World Scholar’s Cup experience as part of their admissions portfolio.

The first World Scholar’s Cup took place in Korea in 2007 as a small regional tournament and has grown to reach about 15,000 young talents worldwide. Besides competing, the students communicate with learners from various cultural backgrounds to discuss concepts and ideas.