You have to be a sensitive listener, reader: Arunava Sinha on being a translator 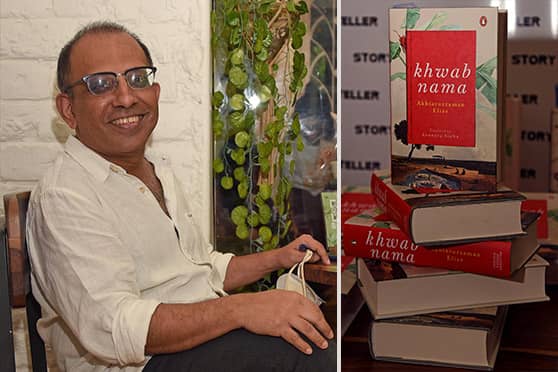 His is the most prominent name in the world of Bengali-to-English translation of literary works. One of Arunava Sinha’s latest releases is the translation of a significant work in Bengali literature -- Akhtaruzzaman Elias’s Khwabnama, set in pre-Partition Bangladesh and published by Penguin Random House India.

At a signing event for Khwabnama at Potboiler Coffee House on Lake Terrace Road, Sinha spoke to Edugraph about the process of translation and its career prospects.

Edugraph: You have translated many literary works from Bengali to English, like Chowringhee and Habber-Jabber-Law: A Nonsense Adventure. What are some of the qualities that a translator must have in order to bring a literary work to life in another language?

Arunava Sinha: You have to be a sensitive listener or reader, set aside your own judgement, analysis and preferences, and get into the intangibles of the text — the music, the mood, the rhythms, the silences. My personal effort is to add nothing and leave out nothing.

How has the experience of translating Khwabnama into English been like? What were some of the challenges you faced with this text?

AS: It was an exhilarating experience because of the excitement of recreating the complexity and beauty of Akhtaruzzaman Elias’s prose. The challenges included long sentences, a variety of registers, the use of dialect, the inclusion of verse and the overall sense of magic that had to be conveyed through English.

Is the demand for translated works – both fiction and non-fiction, literary or otherwise – on the rise? Bengali to English or English to Bengali?

AS: The demand is of two kinds -- from the publishers and from the readers --- though the latter influences the former, of course. The total demand is probably higher now for translations into English, not just from Bengali but from other non-English Indian languages too. I’m not sure about the demand for translations into Bengali, however. That’s still a nascent area.

Would you say that people with a good grasp of two languages can take up translation as a career? How would you suggest a young person go about it, in that case?

AS: I wouldn’t look at translation as a career, for it won’t pay the bills, but certainly as a passion that can sustain one’s intellectual life. And a grasp over two languages is absolutely essential.

One could begin by translating short pieces and submitting them to online journals and magazines. Being published there will add to one’s confidence and make acceptance by a publisher for a full-fledged work easier.

Can you take us through the process of translating – right from the research to the kind of homework needed?

AS: There’s no research per se except whatever the text throws up that needs finding out about. So, one just begins and keeps translating till it’s done. At this stage, the focus is on ensuring everything in the original text makes it to the translated text. Then one puts it away and comes back to it a few weeks later. Now the effort is on editing the draft so that it reads like a work in the new, translated language, without awkwardness and stiffness. A third draft may be necessary for further small improvements.

What are some of the things that one needs to keep in mind while getting into this line of work?

AS: Not to impose one’s analysis or judgement, and to be attentive to everything in the text, not just the dictionary meanings.

As with writing, read a lot. And reading translations in particular is essential between the languages one operates in.
- Arunava Sinha

Is it necessary to take a course in translation studies? Any formal qualifications that you would recommend?

AS: No. As with writing, read a lot. And reading translations in particular is essential between the languages one operates in.

If someone were to start out and try their hand at translation for practice, what kind of work would you advise they should start with?

AS: Short passages to begin with. It might even help to build translation muscles by translating newspaper and magazine articles. Translating film dialogue is great for practice with dialogue.

How can one make their translated work visible to the publisher?

AS: It’s best to work through a literary agent.

Apart from the publishing industry, what other career prospects are available with the translators?

AS: There’s technical translation of documents, and interpretation. Both are better paying than literary translation.

What are your five favourite works of translation by others?